Visiting Bergen with a motorhome 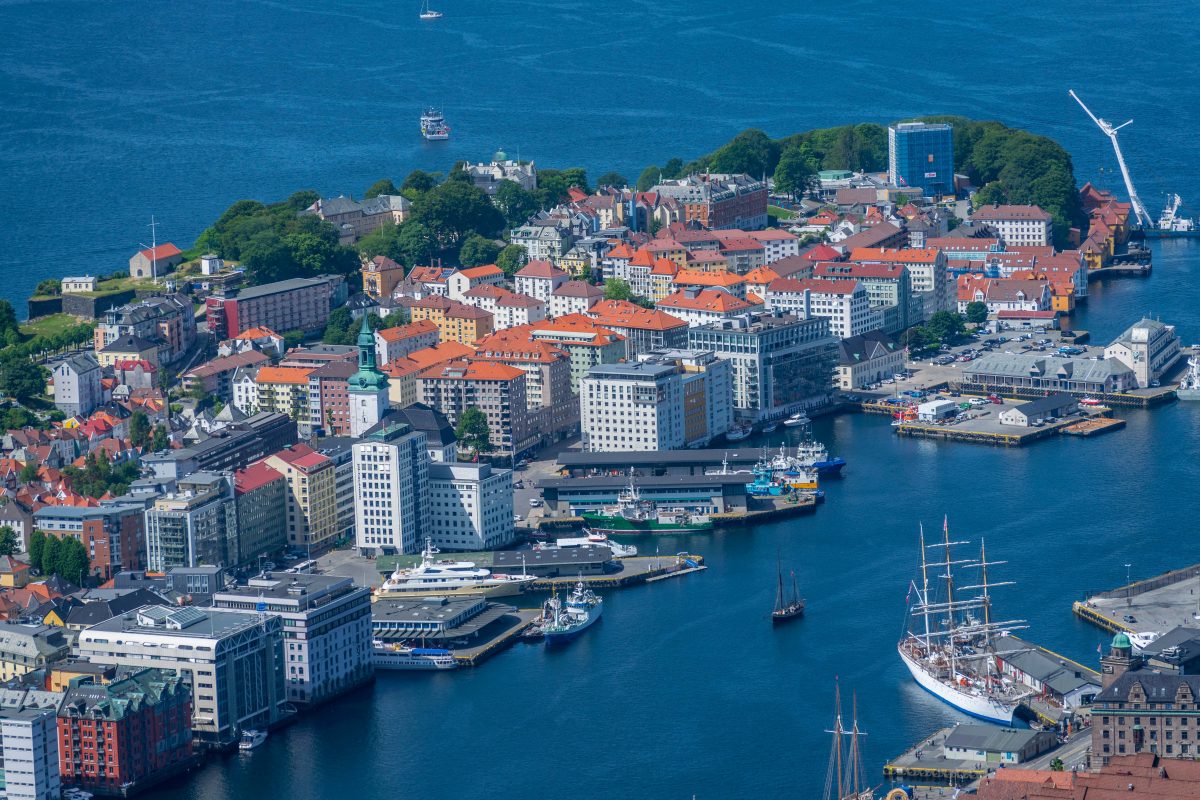 The E39 is a major road that runs north to south in the west of Norway. For such a major road it can be very narrow and winding, but it runs through fantastic scenery and it was on this road that we set off driving south to visit Bergen with a motorhome.

If you don’t like driving through long tunnels then don’t visit Norway because Norway has over 1,000 tunnels, including one over 15 miles long. On our drive to Bergen we drove though many tunnels including one very long one where there was road works and we had to wait 20 minutes before we were escorted through in a convoy. There was also a spectacular tunnel-bridge-tunnel combination. 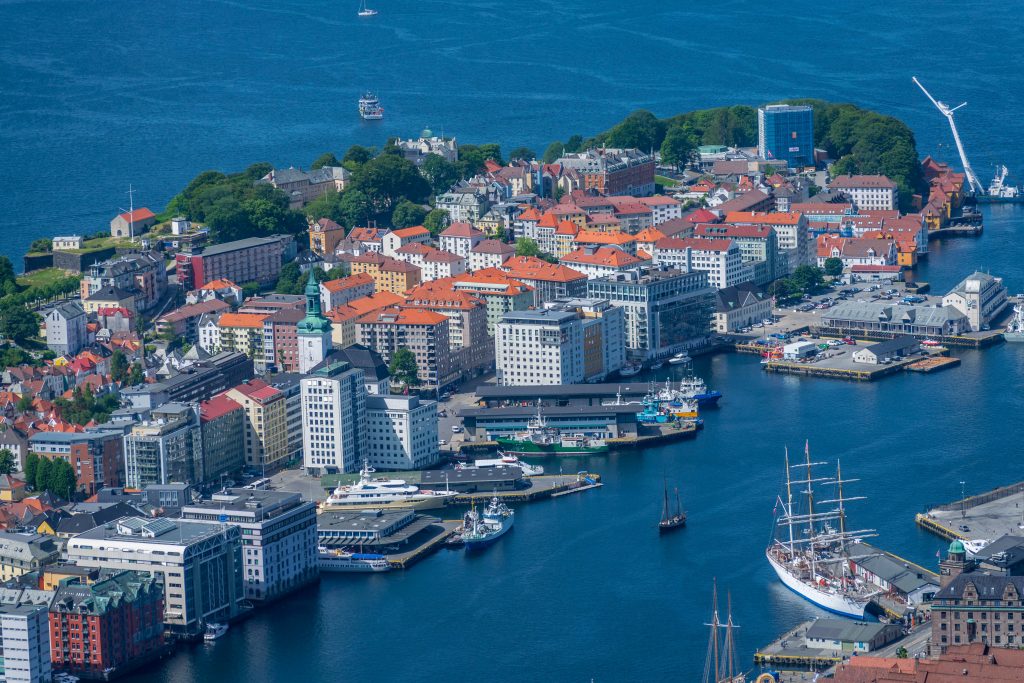 Visiting Bergen in a motorhome.

It was on the E39 that we came across a random  police checkpoint where they were testing everyone with a breathalyser for drink driving. The policeman showed me the reading of 0.00 and I joked with the policeman that I couldn’t afford alcohol in Norway! This was the 2nd time that I had been breathalysed on this motorhome trip as I was also randomly checked in Sweden. The Scandinavians are very keen on random breath checks and they have a zero tolerance approach.

We were last in the city of Bergen in 1999 but I couldn’t remember much about it, so we left our campsite at Lone Camping for the number 90 bus, which stops outside the campsite. We had already bought bus tickets at the nearby supermarket costing 37 NOK each way per person. The bus stops at Nesttun where you change to Bergen’s light rail system to the city centre. 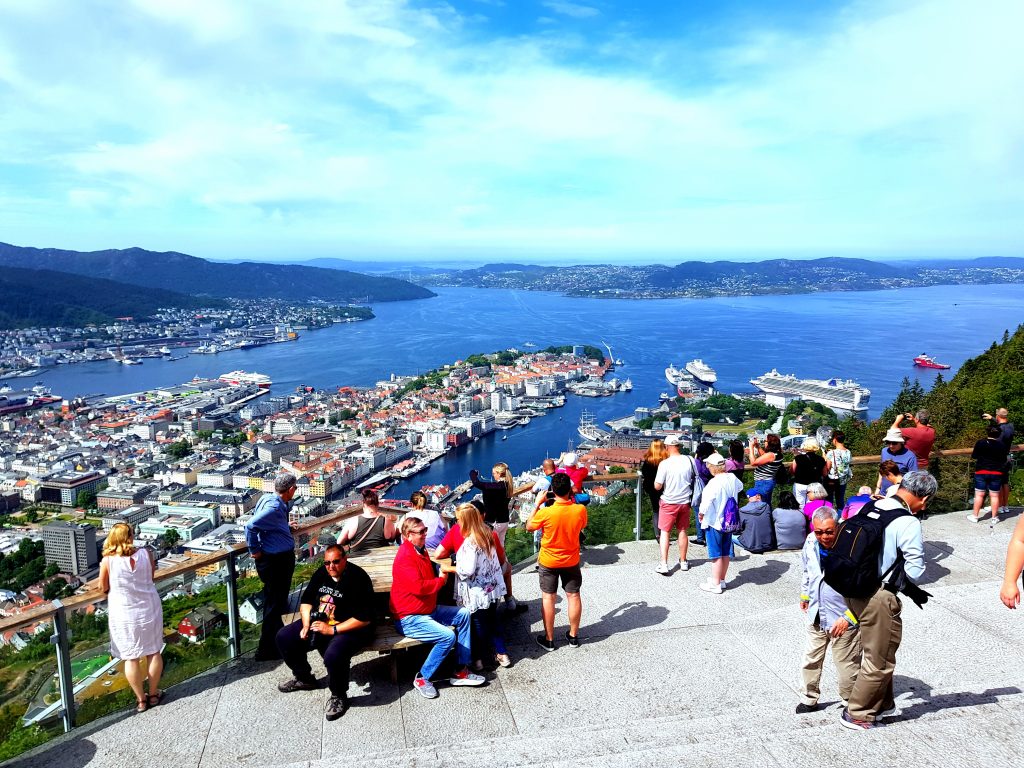 The view from the top of the Bergen Floibanen.

Bergen has a population of 275,000 people and it puts British cities to shame with its transport system. Light rail, efficient busses and trams get people around the city quickly. Having visited many European cities on our motorhome journey they all have very good public transport with the majority having trams or Metro systems, yet my home city of Leeds with a population of nearly 1 million people can’t get its act together to build a modern public transport system.

Having arrived in Bergen centre we headed for the harbour area where it was teeming with cruise tourists from 3 cruise ships that were docked that day including the huge  P & O Azura. We asked one English lady if she was enjoying the cruise and she said there were too many people on the ship, but she loved Norway. If you want to see Norway for a few days then a cruise is probably the cheapest way to do that but touring Norway in a motorhome is the best way!

What to do in Bergen

As we only intended to spend one full day in Bergen, and with a limited budget, we started the day with a walk around the harbour area, and this is where you will find the famous Bryggen area. Protected by UNESCO this is where the very first buildings in Bergen were situated , although the wooden houses have been devastated by fires many times, including the great fire of 1702 when the whole city was reduced to ashes. 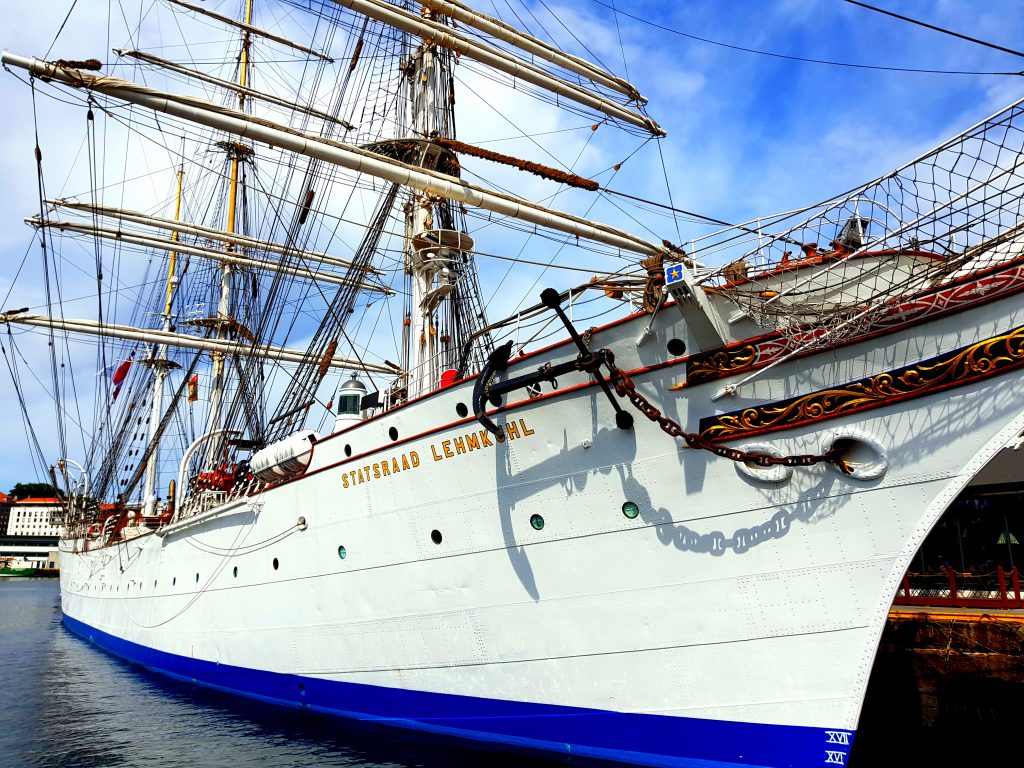 It’s interesting strolling through the narrow alleyways of the Bryggen area, although there are lots of shops selling traditional Norwegian crafts, which personally I don’t have any interest in but Anne of course loves!

The next place we headed for, along with about 5,000 cruise passengers, was the Fløibanen funicular railway. Costing 90 NOK per person, the railway takes you to a viewpoint 302 metres above the city where you get splendid views of the city and harbour area below. 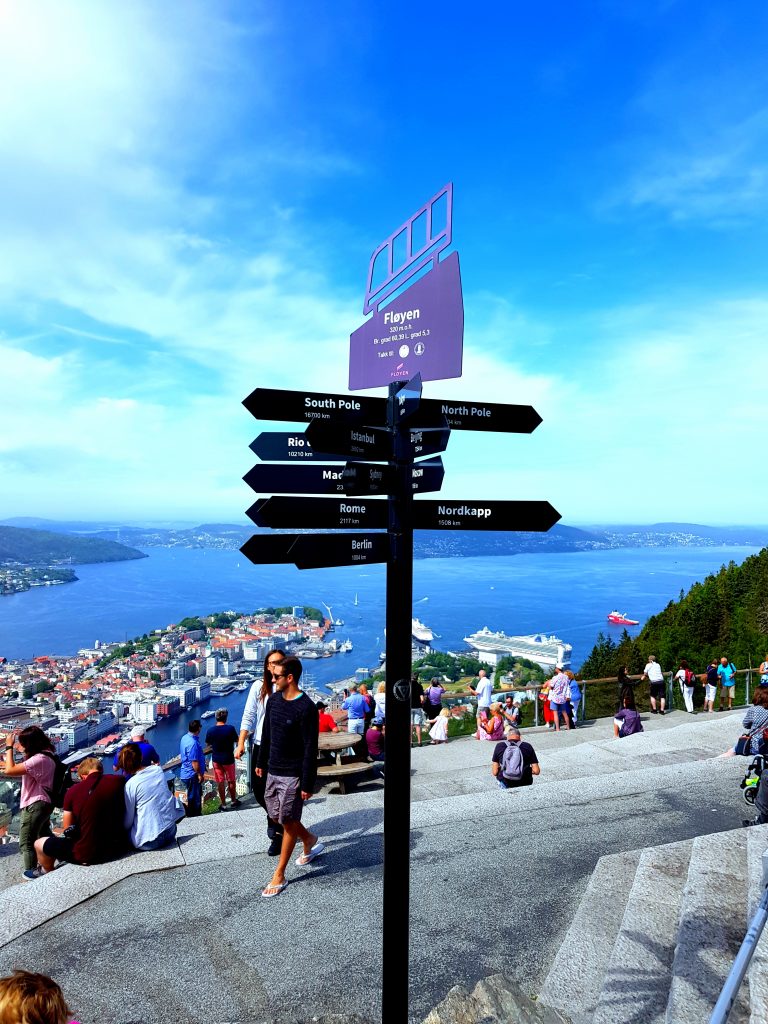 At the top of the Bergen funicular railway

After descending the Fløibanen we needed lunch and found a very nice cafe serving freshly made sandwiches and coffee. At a cost of 250 NOK (£23.15) we savoured every mouthful. A small bottle of water later cost us £2.50 and a coke and ginger ale another £10. We are loving Norway but the high prices are the only negative. 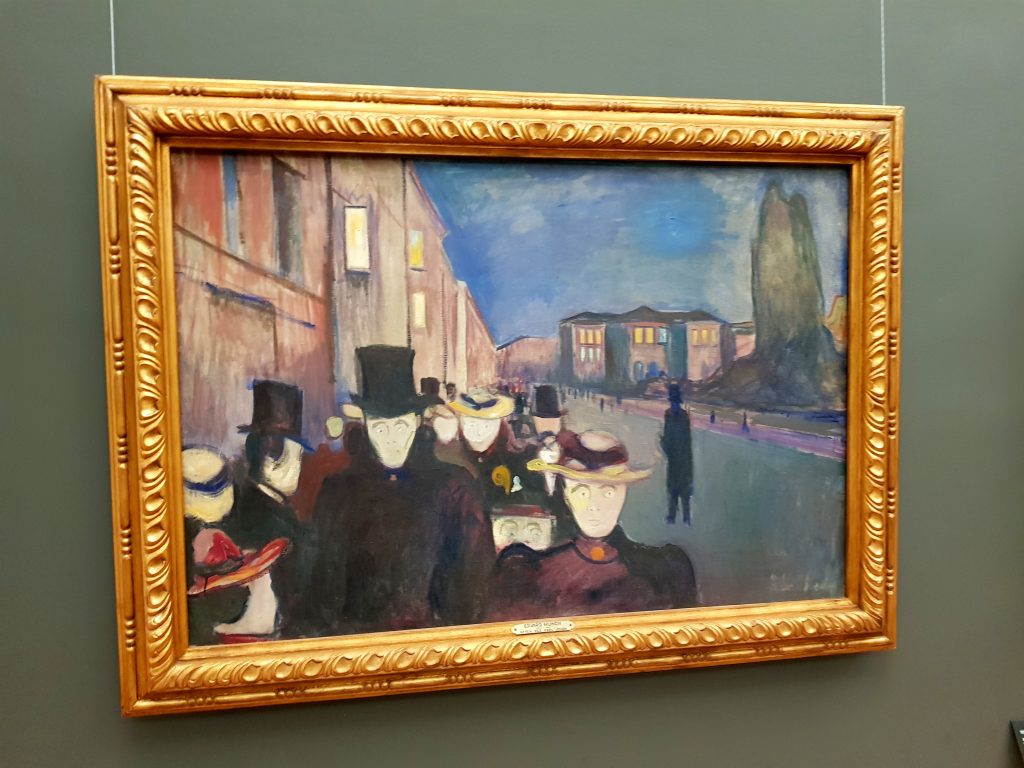 An Edvard Munch painting at the Kode gallery in Bergen.

We wanted to visit the Kode Art Museum. There are four separate buildings that make up the whole museum. Entry costs 120 NOK per person (£11) and we were able to see famous paintings by Edvard Munch and Nikolai Astrup. 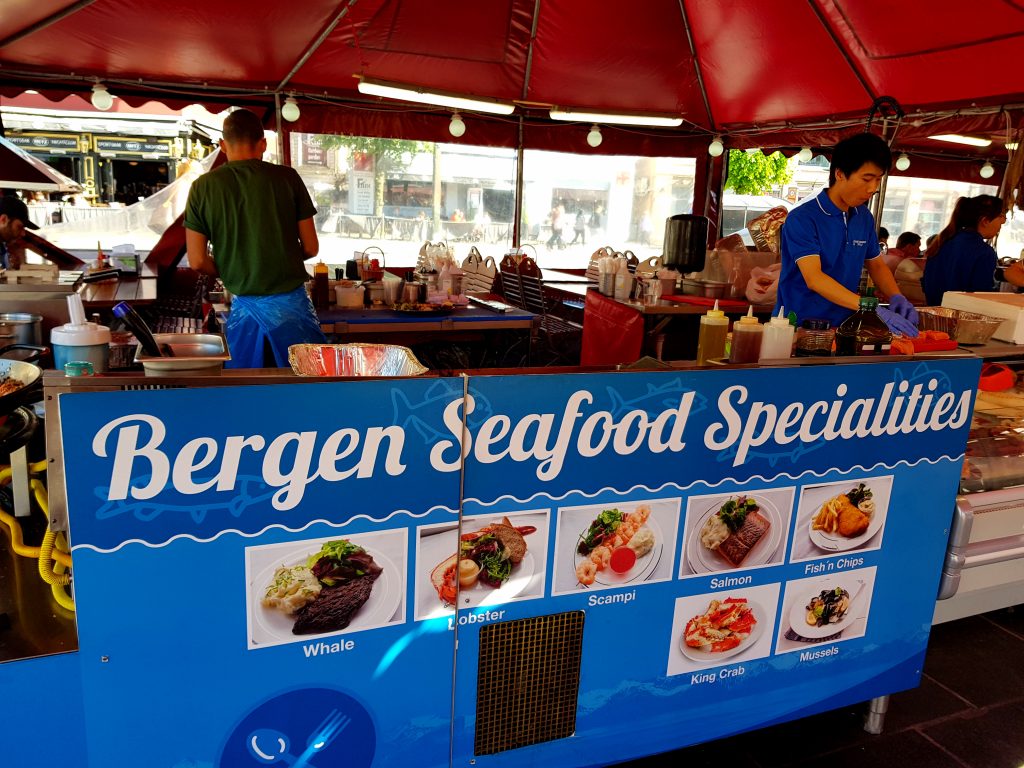 Finally, after a visit to the famous Bergen fish market where whale was on the menu, and I again winced at the high prices, we headed home. By this time, the cruise passengers had gone back onboard ship and it was much quieter. Today, we only touched the surface of what Bergen has to offer the tourist. I did feel a little sorry though for the cruise ship passengers. Most seemed to walk around the harbour area and go up the funicular railway before buying some souvenirs in one of the many shops and then heading back to their cruise ship. Today we also acted like cruise ship tourists, but we have now been touring Norway in our motorhome for one month, with another three weeks left. During this time we have really been able to explore this magnificent country, meet the Norwegian people and see the places that no cruise ship can take you. For that we feel very lucky!

The city of Bergen doesn’t welcome motorhomes in the city centre and they operate a toll system for any vehicles entering. Cars cost 29 NOK and 67 NOK over 3.5 tonnes. We could only find 4 places to park our motorhome in Bergen and they were all very busy. We decided to stay at Lone Camping, which is next to a large pretty lake and takes about 45 minutes to travel to Bergen city centre.

Lone Camping is an average quality campsite. There was a lack of fresh water taps and there is, as there always is in Norway, a charge of 10 NOK to use the showers. We used our own.

We enjoyed Bergen, although it’s not my favourite part of Norway. Ålesund has been my favourite Norwegian town so far. Next we head further south and to Hardanger fjord. 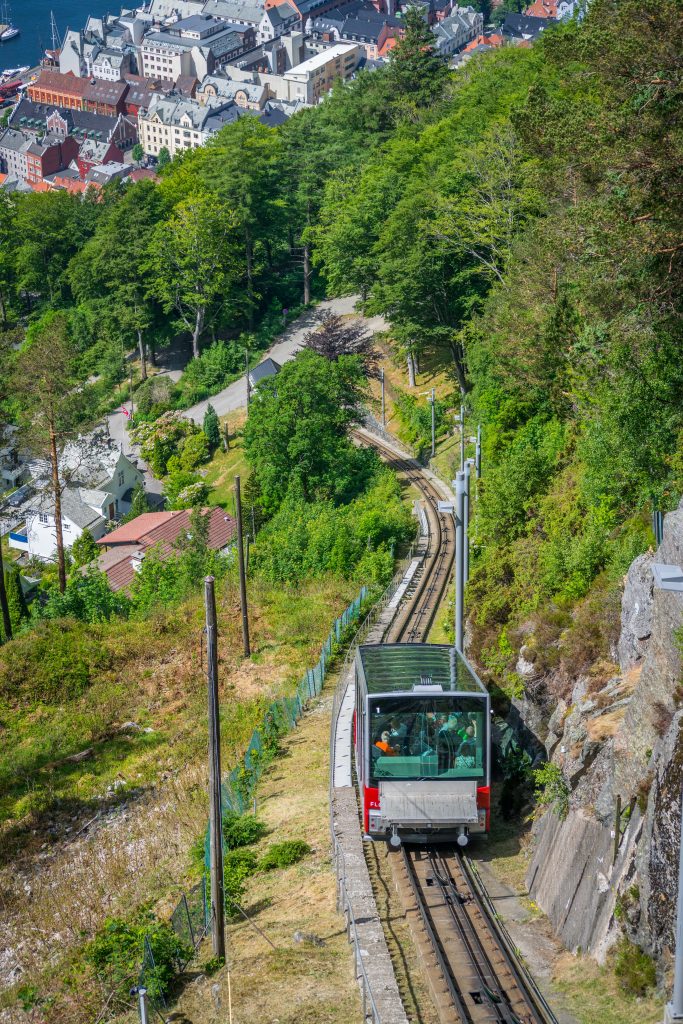 The famous funicular railway in Bergen.