Definitive guide to touring Norway with a motorhome 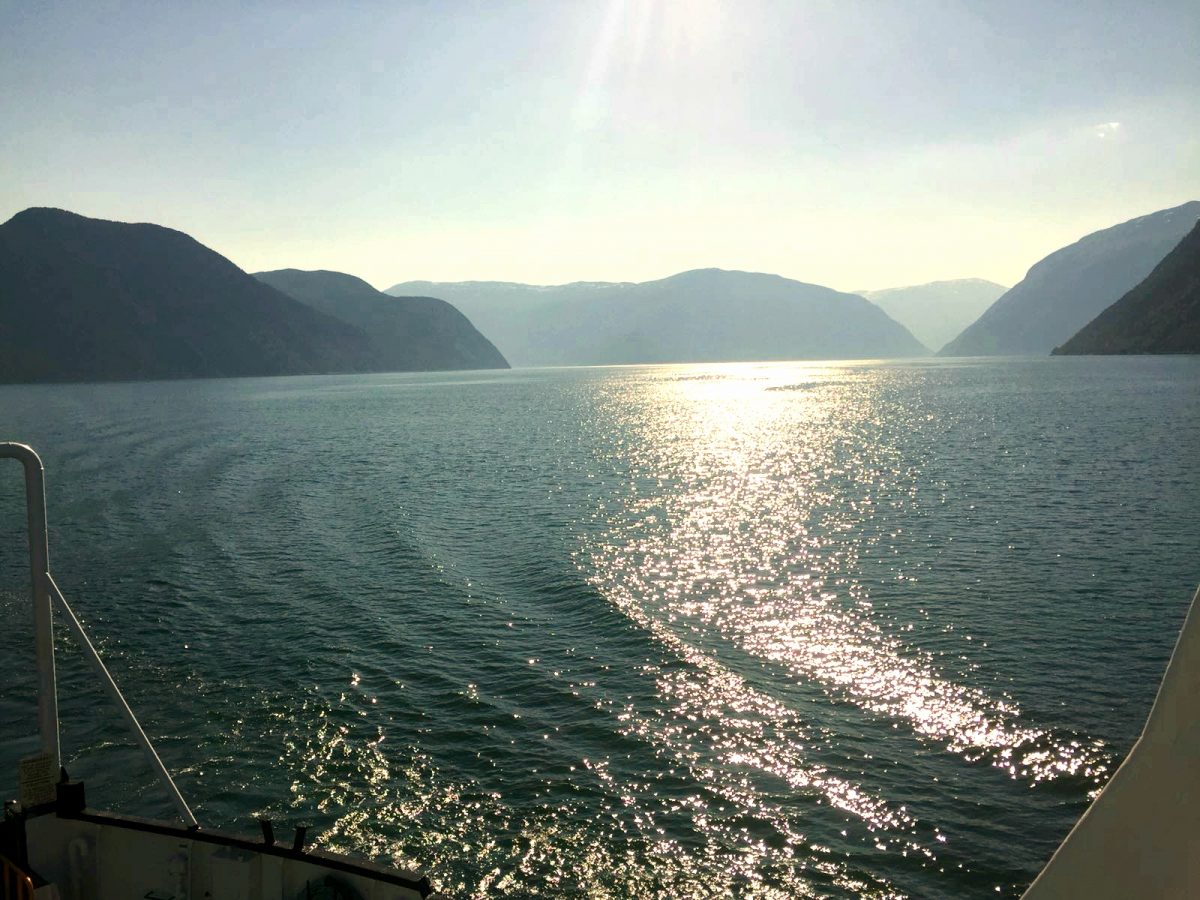 After spending the last 6 weeks touring Norway in our motorhome I think we have found motorhome heaven! Norway has everything the enthusiastic motorhomer needs. If you don’t own a motorhome or camper van, please buy one or hire one and take it to Norway, because you will be hooked, just like we are. 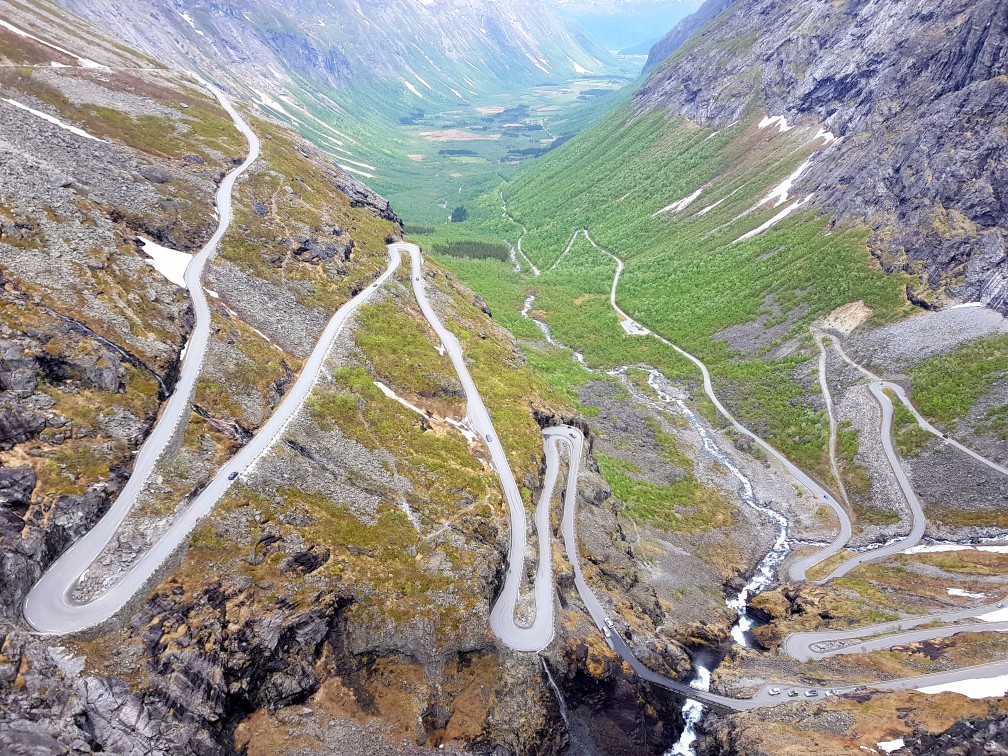 When to go to Norway

The best time to go to Norway is in the summer months, unless you want a skiing holiday. Many roads in Norway can be closed in winter, especially roads like Trollstigen. In fact the Trollstigen road had only opened a week before we were there and I would have hated to have missed the drive up there. There is a good website where you can check which of the scenic Norwegian roads are closed and also a table that shows you the dates that the roads opened for the past few years. You can visit that website here.

We arrived in Norway in early May and the weather was warm and sunny. The temperature reached 24C on several occasions, although Norwegians we spoke to said the hot weather we had was very unusual. I would also recommend being in Norway for their National Day on 17th May. It’s a fantastic spectacle to see so many proud Norwegians waving their national flag.

Days in Norway, of course, are very long in summer. We found it was still light at midnight and was light again at about 4am. Black out blinds in our motorhome were very useful in helping to get a good nights sleep. 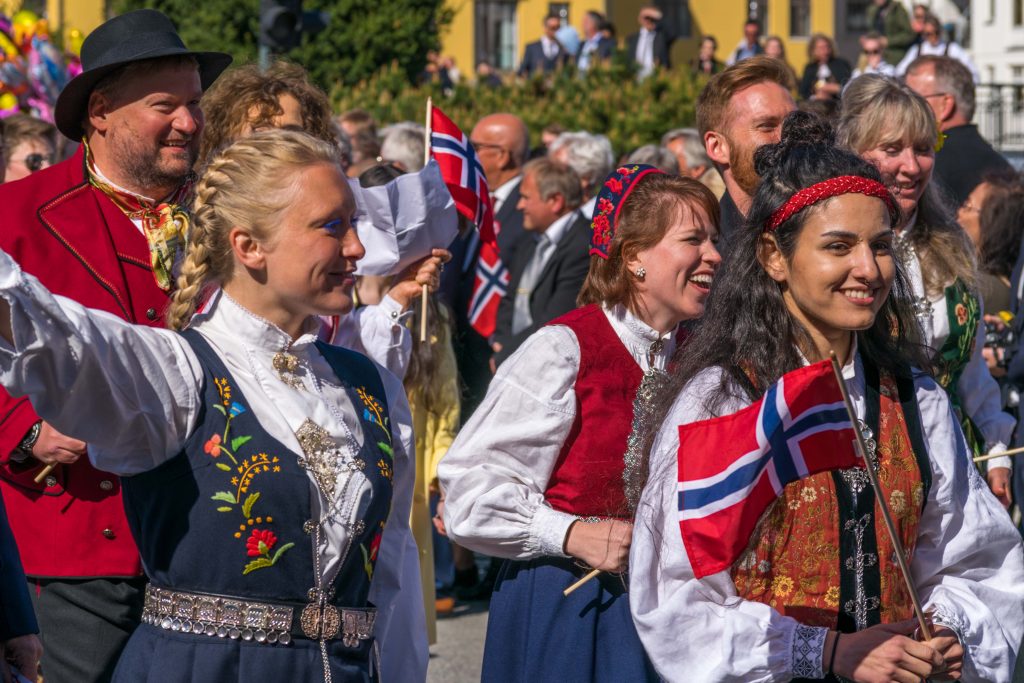 Norway celebrates 17th May every year.

How to get to Norway

If you are driving from the UK to Norway with your motorhome you will need to find the best way to get to mainland Europe. There are no ferries from the UK to Norway. Our route took us from Hull to Rotterdam on the overnight ferry and we then drove through the Netherlands and northern Germany to the port of Puttgarden. Ferries run every 30 minutes to Rødby in Denmark. We took this ferry route because we wanted to see Copenhagen and drive north through Sweden.

The most popular ferry route to Norway is from the Danish ferry port of Hirtshals, to Kristiansand in southern Norway. Ferries also operate from Hirtshals to Larvik. Ferries are operated by Color Line and the journey takes 3 hours and 15 minutes. The typical cost of a one way trip with a 7 metre motorhome is about €198, based on  June departure, but costs are higher in the peak season.

If you take the Puttgarden ferry (about €100 for a 7 metre vehicle) you then need to cross the Øresund Bridge to Malmo (€98) or take the ferry from Helsingør to Helsingborg in Sweden. You could then drive via Gothenburg to Oslo.

A more expensive option is to take the ferry from Frederikshavn in Denmark to Oslo. This is the 12 hour ferry route we are using on our return from Norway. The cost for us was £335, including a 2 berth outside cabin.

The cost of living in Norway

Norway is an expensive country to visit. They have a high standard of living and food prices are high. Diesel cost us about £1.45 a litre. Before setting off for Norway we took as much food with us as weight would allow so that we could limit the amount we spent on food in Norwegian supermarkets. Of course, we bought fresh food such as milk, salad, orange juice (applesin juice) and found that we used Bunnpris and Joker supermarket chains, not because we thought they were cheap, but because we just happened to find more of them.

Driving in Norway is a joy. Speed limits are low and even the main roads such as the E39 can be narrow making journey times longer than you might expect. In general, the Norwegian speed limit is 80 kilometres per hour, except for in built-up areas or town centres, where it is 50 kilometres per hour unless otherwise stated. It can be as low as 30 kilometres per hour in residential areas, and as high as 110 kilometres per hour on certain dual carriageways and motorways. Penalties for exceeding the speed limit are amongst the highest in Europe and I saw several cars stopped by unmarked police cars. I was also randomly breathalised at a police checkpoint so don’t drink and drive.

AutoPASS is the Norwegian system for collection of road and tunnel tolls. There are very few manned tolls and instead automated VNPR cameras are used to record number plates. I registered my vehicle details with Euro Parking Collection (EPC) before entering Norway and they send an invoice for payment. You can read about EPC here.

I have never driven through so many tunnels in my life. Norway has over 1,000 road tunnels that cut straight through huge mountains and underneath the sea. The longest tunnel is over 15 miles long. Most are free but there are some where you pay a toll. Drive carefully through Norwegian tunnels because many are very long and narrow and quite often they can be very dark, especially until your eyes become adjusted to the change from bright sunlight.

Many tunnels in Norway are not lined with concrete and instead have just bare rock; we found these tunnels to be the darkest to drive in. You will also be amazed when you see tunnels with roundabouts in them and road junctions.

The best tunnel we drove through was the Vallavik Tunnel which is an incredible tunnel-bridge-tunnel combination which includes two roundabouts in it!

You can hardly drive anywhere in Norway without using ferries. They are very efficient and run regularly. They are part of the fun of a motorhome holiday in Norway, but you need to budget accordingly. The cost of taking a motorhome on a ferry in Norway depends on the length of the motorhome. Under 6 metres is the cut off point and anything over than that costs on average about double. Our motorhome is 7 metres long and the amount we paid for each ferry we used is shown below. Bear in mind that if you say your motorhome is under 6 metres and they check you can be fined so always be honest. 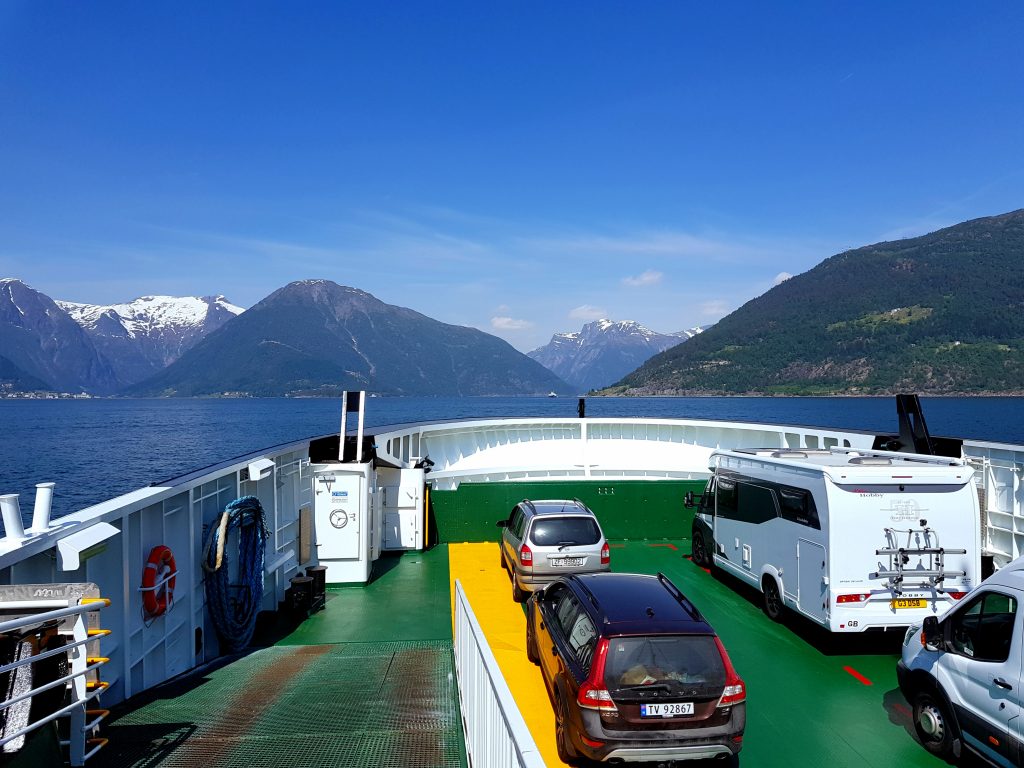 Our motorhome on a ferry in Norway.

Payments for ferries in Norway are normally paid after you have driven on to the ship but we paid in the queue for the Geiranger ferry. We paid all our ferry costs by card but cash is also an option. 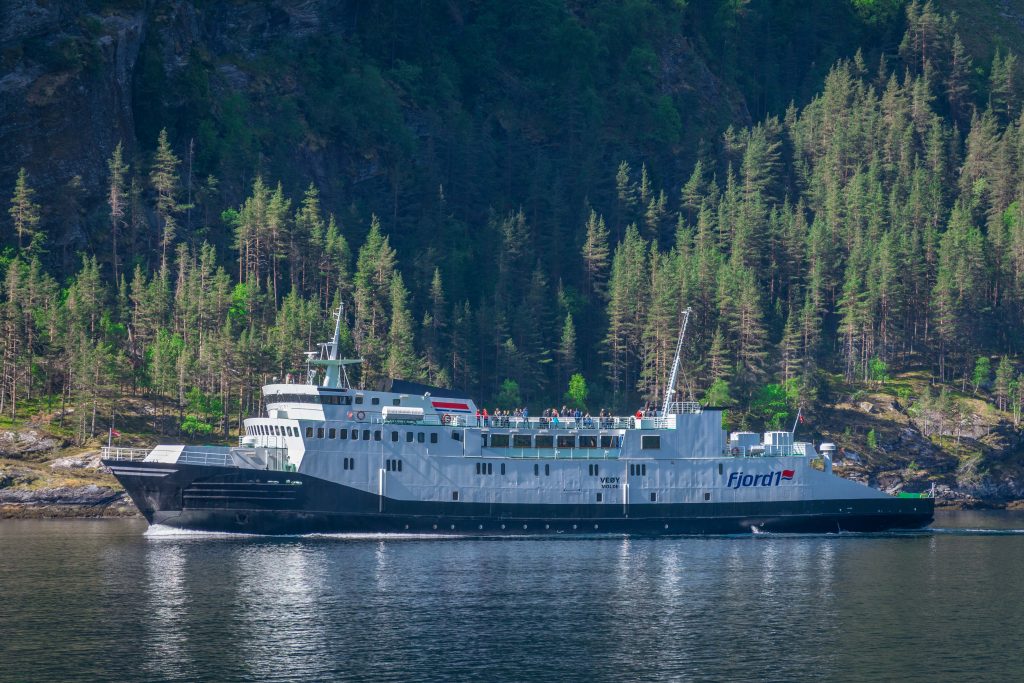 Where to go in Norway

Norway is an amazing destination to visit. It is perfect for touring. The scenery, the people, the culture, the towns and the quality of the campsites all stand out to make Norway our destination of choice, especially when touring with a motorhome. Norway is a very big country so when planning your visit don’t try to do too much; you can always visit Norway again. When planning our trip we originally wanted to visit the Lofoton Islands but we decided we would save Lofoton for another time after realising that we would be driving for longer than we wanted. Lofoten is 1,369 km from Oslo and at least 20 hours driving time on slow roads.

For more information about where we visited in Norway see the separate articles below.

Using the Internet and mobile phone in Norway

The Norwegian word for a motorhome is ‘Bobil’ and the word for parking is ‘parkering’. Norway is a very big country with a small population, many of whom own a motorhome themselves and the country is very well geared up for motorhomes. Car parks often having specific places for motorhomes and if they don’t there is normally plenty of space available. 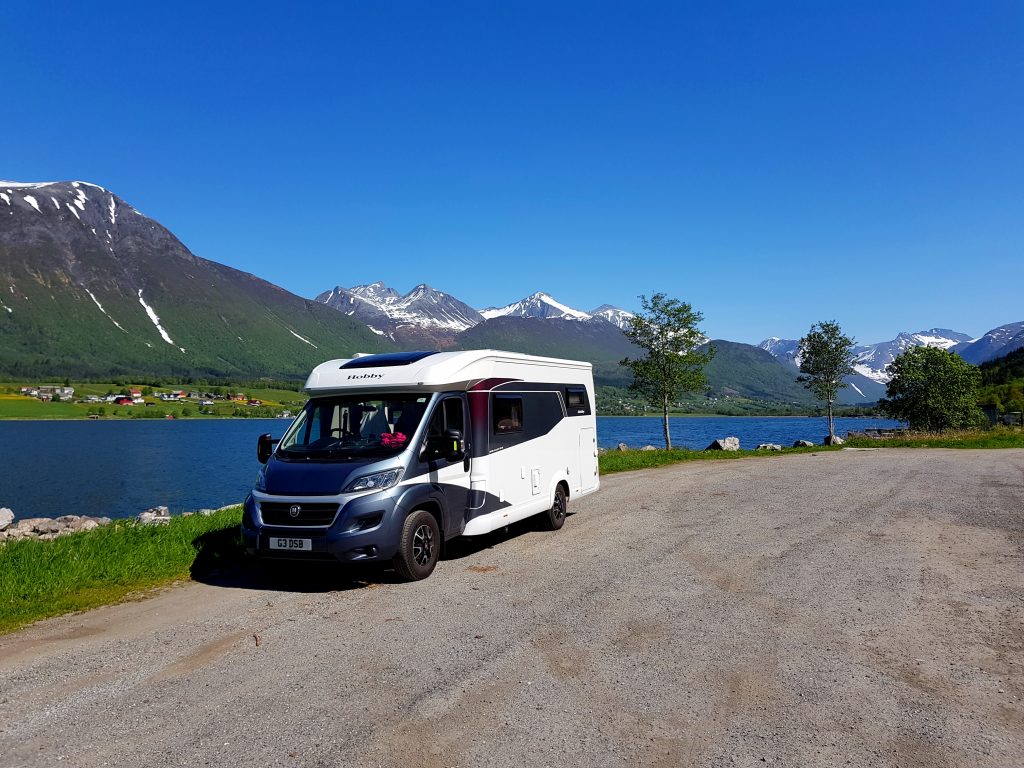 Our motorhome in a free overnight parking spot by a stunning lake in Norway.

Norway also has plenty of free places to stop for the night. All the locations we stayed out appeared perfectly safe to us and there were often other motorhomes parked there too. We found it harder to find free parking places in the popular fjords area’s such as Geiranger, but maybe we didn’t look hard enough. We would rather pay to be on a good campsite in a great location rather than stay overnight in an industrial area, so we probably stayed at more campsites than we could have done. We found campsite prices to be fairly reasonable. The beautiful campsite at Oldevatn for example cost £18 a night, which is far cheaper than many campsites in the UK. Norwegian campsites normally charge about 40 Norwegian Krone extra per day for electricity and use of the showers can cost 10 Norwegian Krone a time , we avoided paying  this by just using our own shower for the most part. Campsites in the main tourist towns tend to be more expensive. For example we paid £30 a night in Bergen.

The majority of campsites in Norway that we visited had holiday cabins for rent of various sizes. It’s possible to just turn up without booking, apart from high season, and prices are quite reasonable. I enquired about several and was quoted between about £40 and £75 per night. It’s expected that you supply your own bed linen, but it’s possible to hire that too. If you don’t have a motorhome, consider taking your car and rent a holiday cabin similar to the one I took a photo of below. 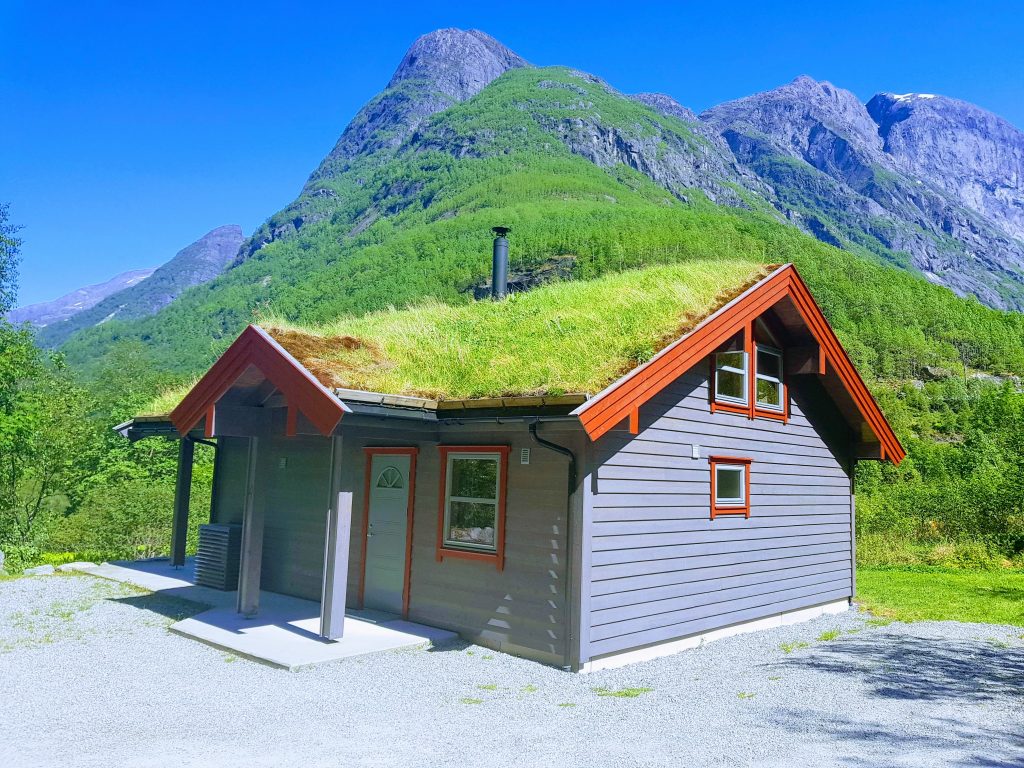 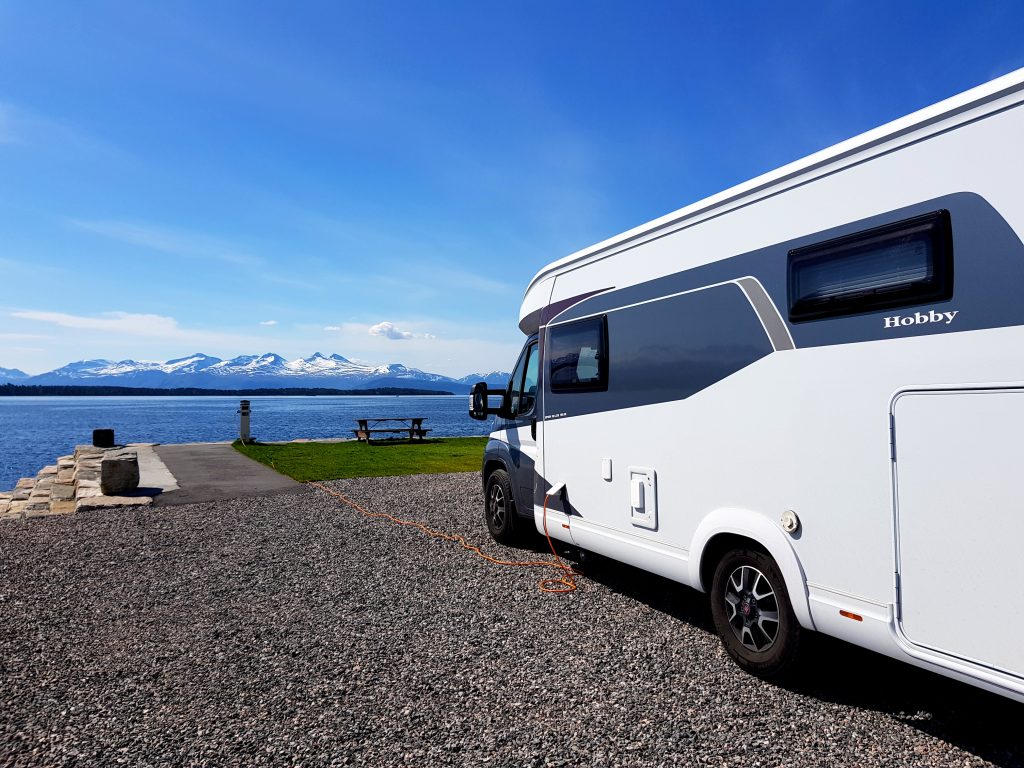 We paid £23 a night for this amazing campsite at Molde, Norway. What a fantastic view

How much did our motorhome trip cost?

Norway is an expensive country to visit but there are things you can do to reduce the cost. Food costs about 2 or 3 times more than it does in England so we took 2 large plastic boxes of food costing about £200, which I didn’t include in the table below. We did quite a lot of wild camping, but we could have done more, but the best campsites are in the best locations so we decided to use them.

Ferries are an inevitable part of visiting Norway. You can’t really avoid using ferries but you can avoid the expensive one’s that we used as a tourist attraction. Two ferries alone, Geiranger and Kaupanger, cost us £275 and we didn’t need to do these.

We didn’t really dine out but the amount we spent included 2 lunches and the inevitable coffee and cakes! What’s the point of visiting a country if you don’t do some tourism things? We visited many museums and other bits and pieces.

The cost of our motorhome tour of Norway was slightly above our budget and I haven’t included the cost of getting to and from Norway. We could have done it a lot cheaper. Overnight camping costs worked out at £18 per night on average over 45 nights.

Top tips for a motorhome tour of Norway

I hope this guide helps you if you decide to visit Norway. It’s an incredible country but we did not see many people from the UK. Maybe it’s the perception that Norway is expensive, but that should not put you off visiting Norway, because it has an incredible amount to offer, especially if you are touring in a motorhome.

Please leave a comment if you have a question about visiting Norway with a motorhome or if you have any advice of your own to add. We would love to hear from you. 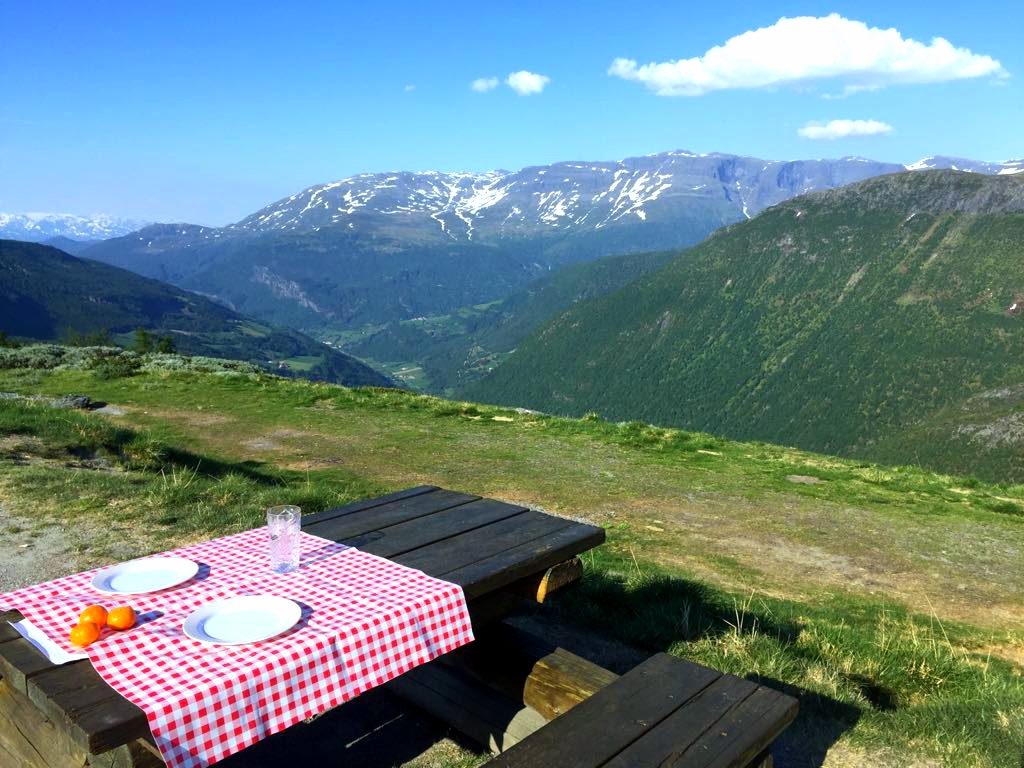 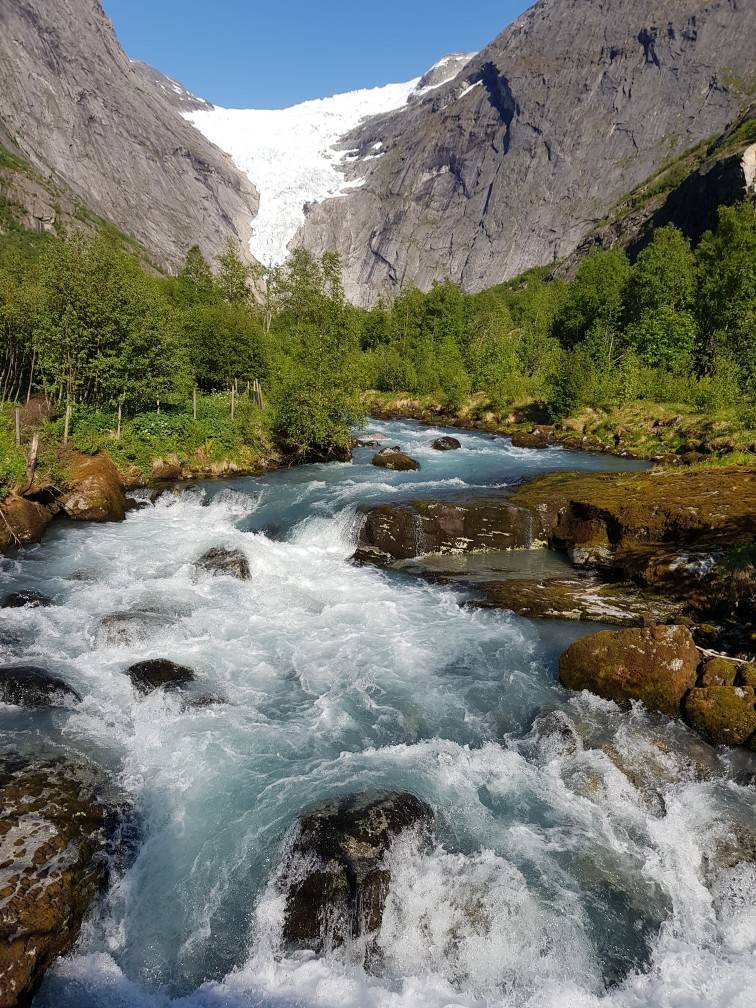 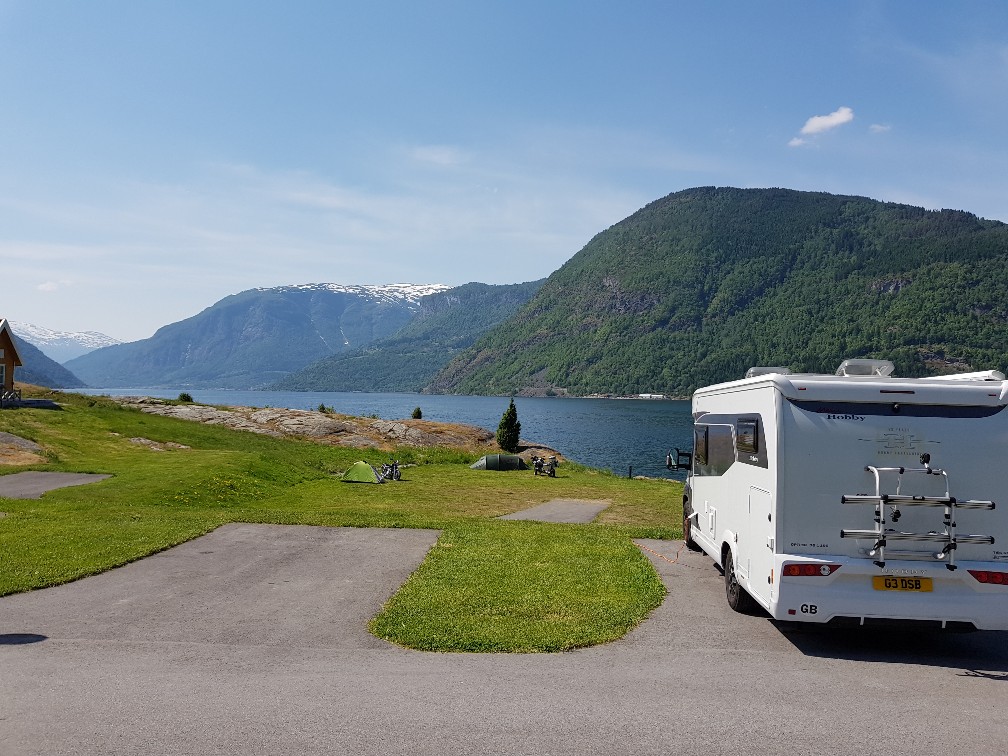 Our motorhome pitch on a campsite in Norway. 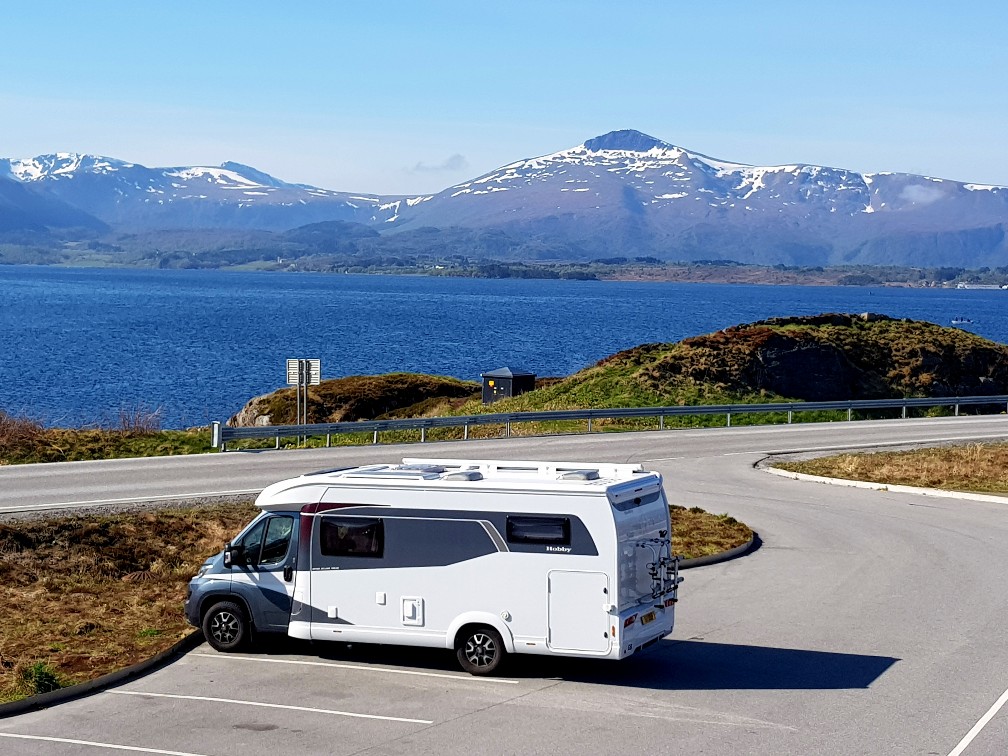 Our motorhome parked on the Atlantic Road in Norway. 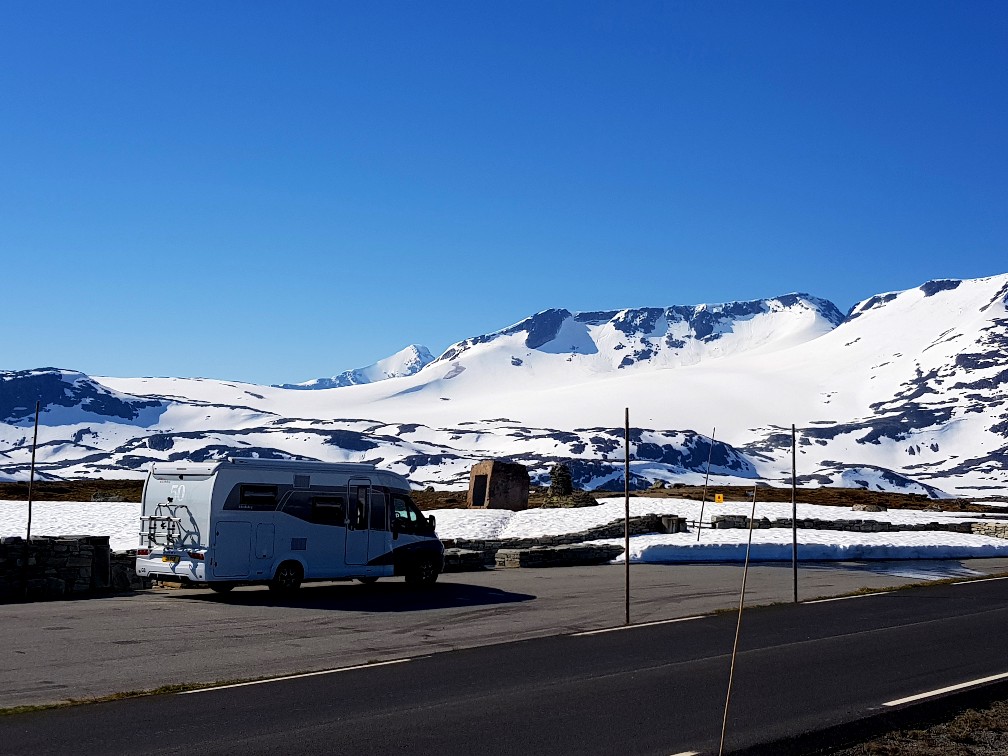 Our motorhome parked on the highest mountain road in northern Europe