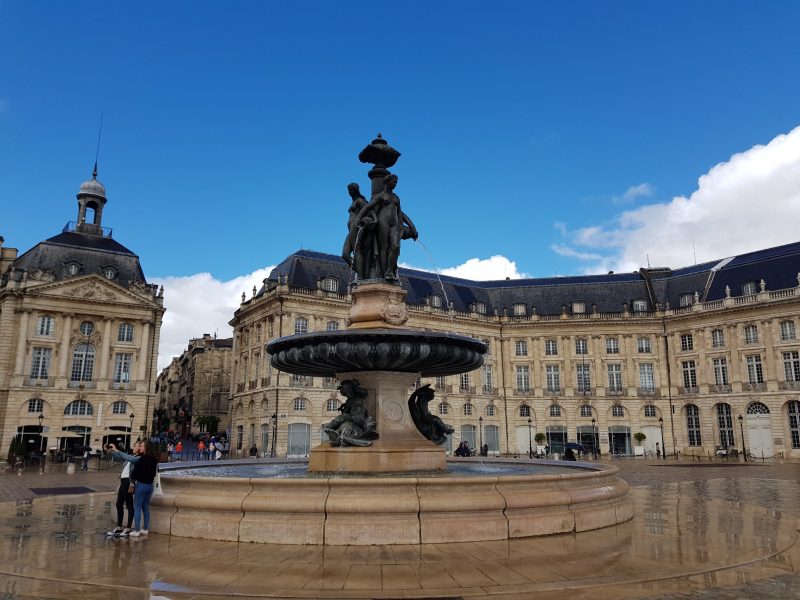 After our visit to the amazing Dune du Pilat we decided we needed a day in a city so as Bordeaux was close by that’s where we would go. With seemingly limited places to park a motorhome for the night we headed for the only campsite on the north of the city.

We rarely book anywhere to stay, preferring to turn up and hope that spaces are available and we have never once been turned away from a campsite. Camping du Lac had plenty of pitches available but at €25 a night it is one of the most expensive places we have stayed on this trip. City camping is often more expensive due to the convenience they offer for visiting popular cities.

It takes about 20 minutes to travel into the city centre using the number 73 bus that connects to the C line tram. Travel tickets cost €1.70 each way and are available at the reception of Camping du Lac.

The city of Bordeaux – my opinion

Situated on the River Garonne, Bordeaux is a city with a population of about 250,000 people and it is expanding rapidly with dozens of apartment buildings being built.

I didn’t know what to expect from Bordeaux but I have to admit to being a little disappointed by it. The city has many beautiful buildings, a thriving restaurant and cafe culture but, for me, it lacked a personality. (Possibly due to poor weather).

What to see in Bordeaux

Place de la Bourse – The most famous square in Bordeaux. Built in the 18th century it took 25 years to build. Best viewed from the river side across the Le Miroir d’eau. Magnificent buildings surround the square. 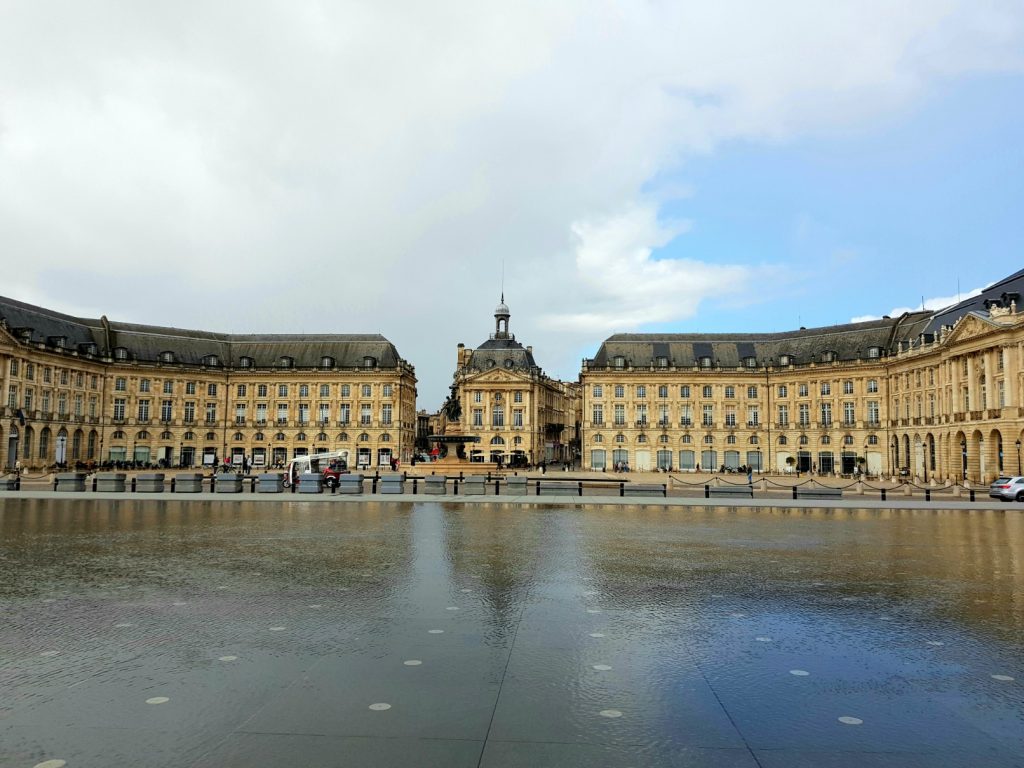 Bordeaux Cathedral – A medieval Gothic cathedral built in the 12 century. It was stripped of its interior during the French Revolution so what you see inside is from elsewhere. 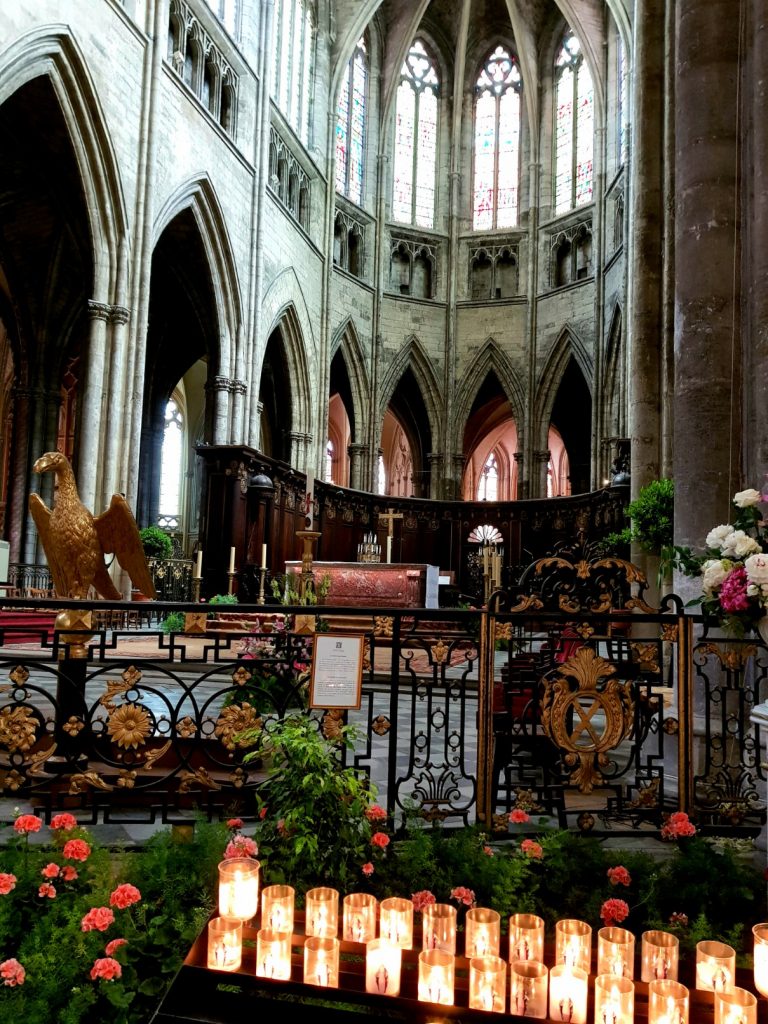 Pey Berland Tower – Built in the 15 century it looks like it should be part of the cathedral next door but it is a stand alone building used as a bell tower. It was built separately from the cathedral so that vibrations from the bells wouldn’t damage the main cathedral building.

La Cité du Vin – A futuristic museum dedicated to the history of wine. Be prepared to spend a full day here if you want to watch the 10 hours of video available about wine.

Esplanade des Quinconces – Another famous square that often is the location for cultural events. You can’t miss the elaborate fountain and statues.

The old town – we enjoyed wandering the streets with the magnificent buildings. The area is full of cafes, restaurants and bars. We had lunch at a small Italian restaurant, run by French people! The local food speciality is called Canelés. They are small pastries baked in a mould with vanilla, rum and cane sugar.

Public transport in Bordeaux – Yet again we have seen a European city with a fanastic tram/light rail system. Bordeaux is a third the size of Leeds yet it has a modern and extensive 66km system that is cheap to use. I wish all UK cities had similar transport networks. In my opinion HS2 needs to be scrapped and the money spent on improving local transport for the benefit of the many rather than the few. 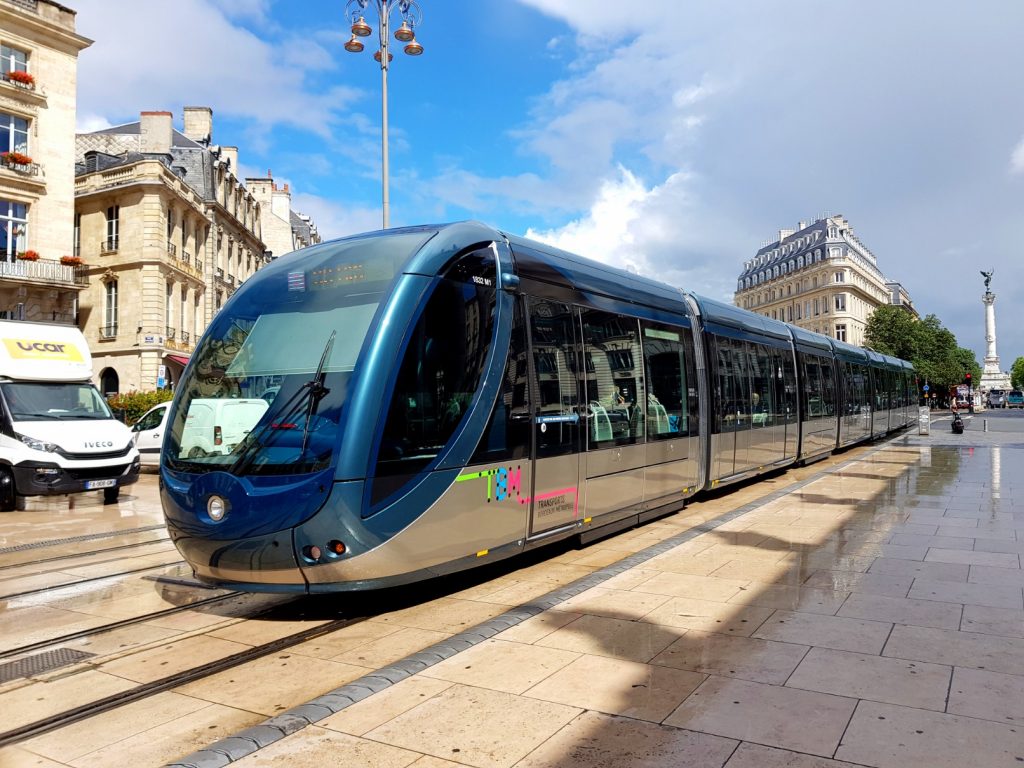 A tram in Bordeaux

The weather whilst we were in Bordeax was heavy rain showers so this probably spoilt our appreciation of the city, which I’m sure has got more to offer than we saw. I would return but I can think of other places that I would give preference to. 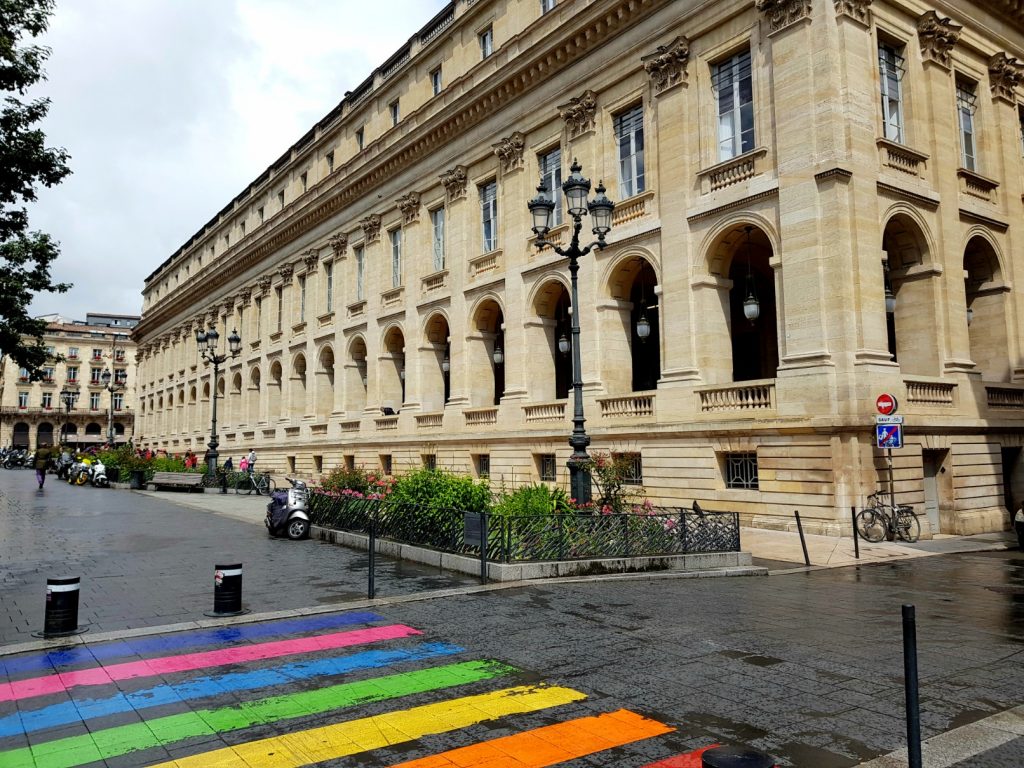 One of the beautiful buildings in Bordeaux 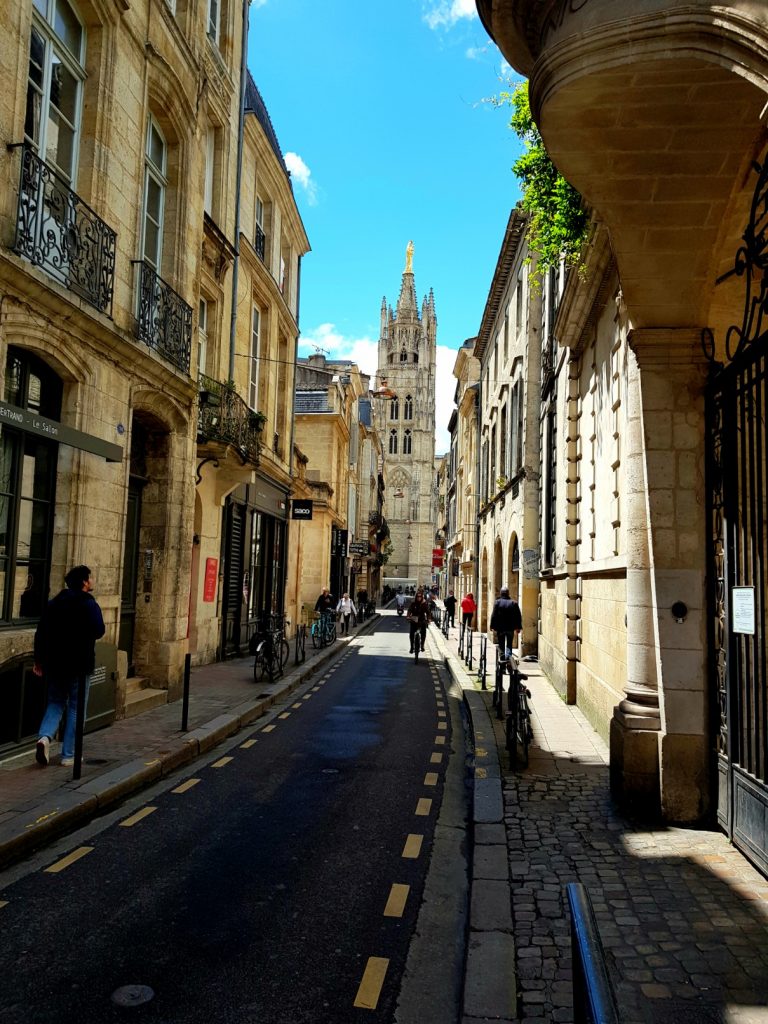 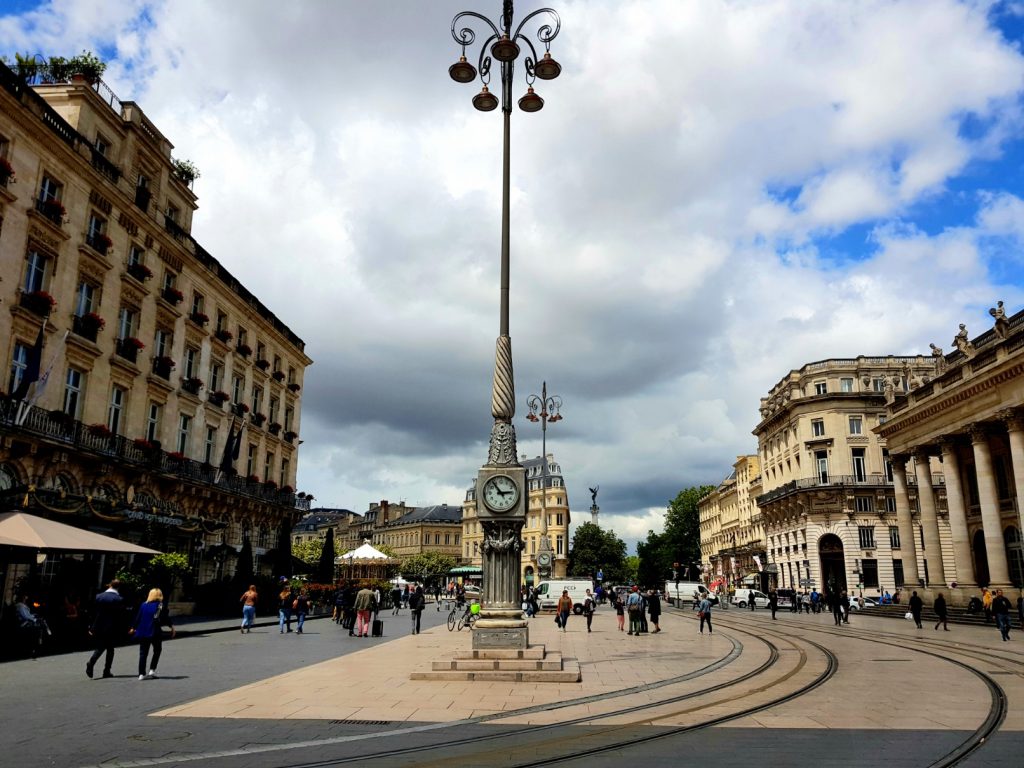 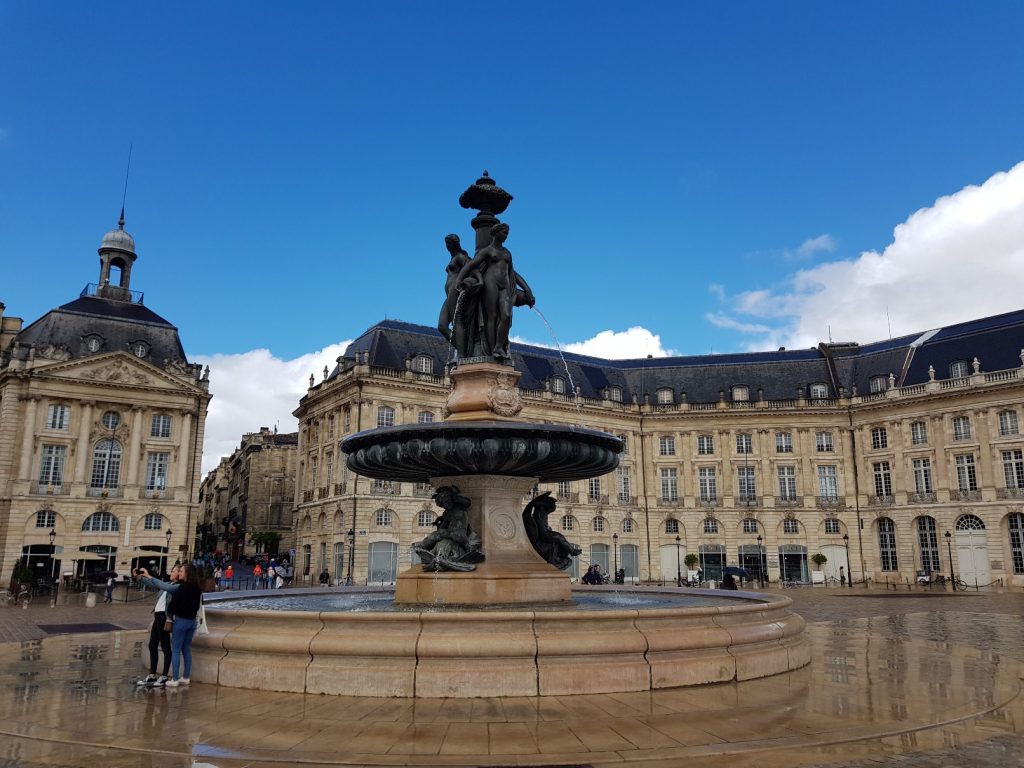 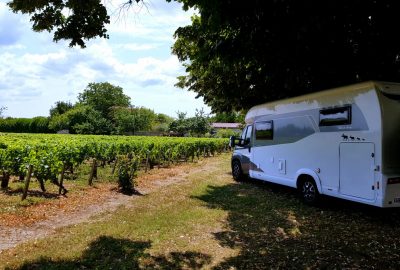