Dalsnibba – The best view in Norway? 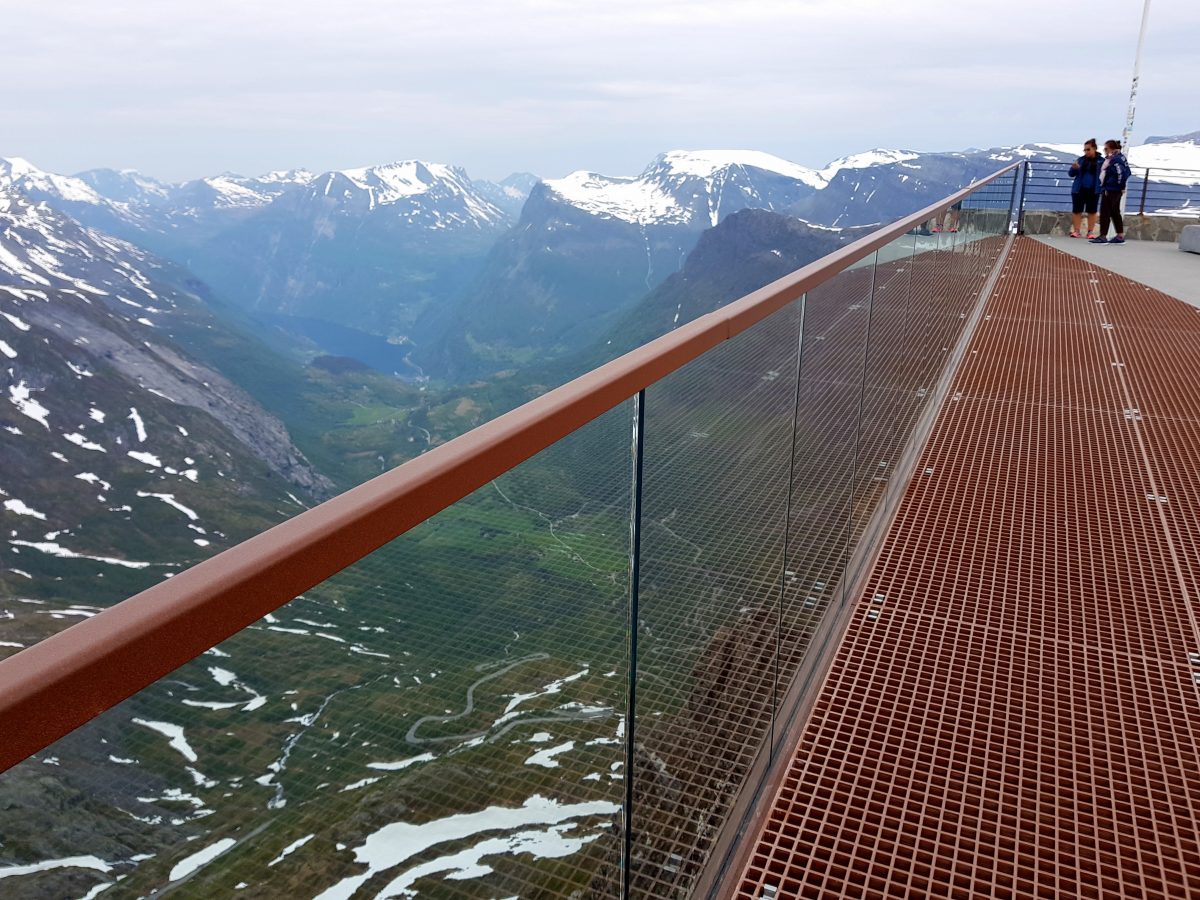 Fantastic, dramatic, spectacular, authentic or unique? I don’t think that any of these words adequately describe Fjord Norway. Reading through a leaflet this morning about the Geiranger area of Norway a phrase in it said “Norway is not a place. It’s a feeling”. I totally agree. You need to be in Norway to fully appreciate the magnificence of this country. Our journey to Dalsnibba would exceed all expectations.

Our last venture up a mountain road was the famous Trollstigen road (blog post here) and down the very steep Eagle Road into Geiranger fjord. This resulted in some very hot brakes that we weren’t too keen on repeating. It was with this in mind that we discussed whether we should take our motorhome up the very steep road to the Dalsnibba viewpoint, 1500 metres above sea level. I said that we are so close we should do it, so off we went. Why would we want to miss the highest viewpoint of fjords in Europe, even though we might have brake failure and plummet hundreds of feet off a mountain road!

Stopping in the middle of the road to talk to fellow Brits!

The road to the Dalsnibba viewpoint started off very gently along FV63. The road was quiet and we were admiring the scenery around us when we saw a motorhome approaching us from the opposite direction. As we got closer, we noticed the couple were waving frantically at us and they had a British number plate. Motorhomers do tend to wave at each other but this was more enthusiastic waving than we normally see.  We noticed in the rear mirrors that they had stopped. We also screeched to a halt in the middle of the road and got out to say hi. It turned out that Richard and Annie were also touring Denmark, Sweden and Norway and were following our travels by reading our blog and they had recognised us! What are the chances?  Naturally, they were full of enthusiasm for Norway and we wished we could have talked for longer, but we were blocking the road and had to crack on. What a lovely couple Richard and Annie were and I hope that we get chance to meet up again for a longer chat sometime soon. 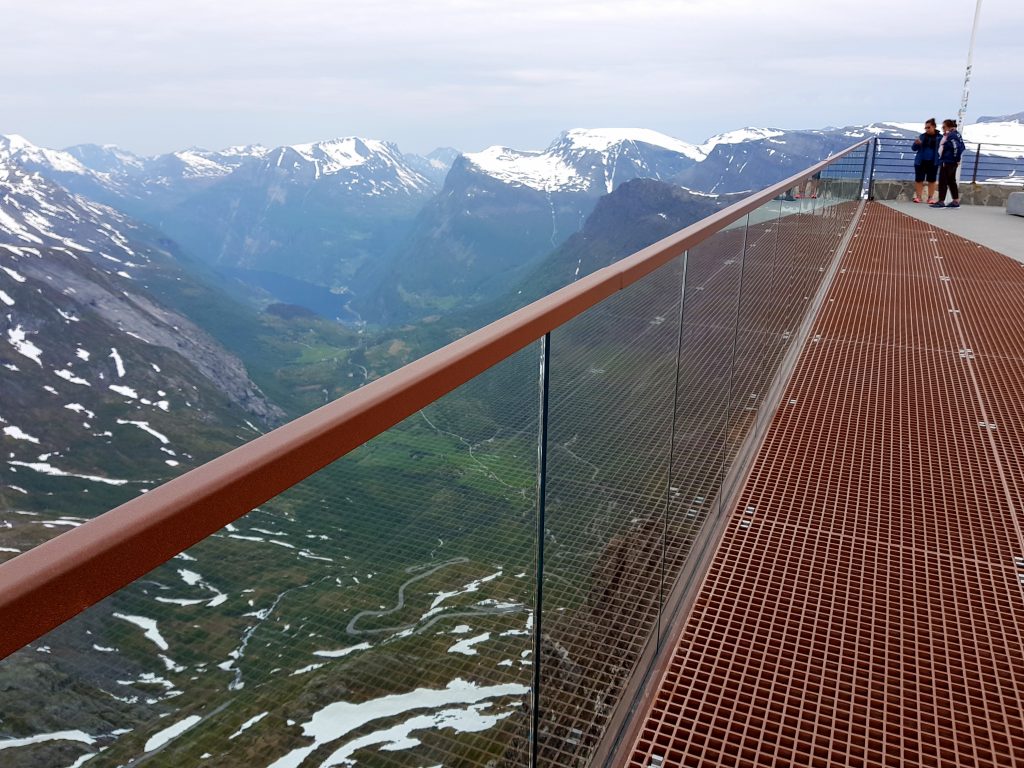 The Dalsnibba road turns off FV63 Geiranger road and you have to pay a toll of 140 NOK (about £13). It’s expensive but considering the effort that has been put into building this mountain road, that ascends 500 metres in a short length of time, I think it’s worth it. We hadn’t chosen the best day for it though because the sky was grey and I was worried that I might not get my £13’s worth of photo opportunities!

In typical Norway fashion there is a visitor centre, shop and toilets as well as one of those viewpoints where the walkway is see through. I could see a drop of hundreds of metres below my feet and many people were refusing to walk on it! I noticed very big steel girders embedded in the rock as I walked out on it and I felt a little more reassured. Geiranger fjord was in the distance below us and the view was awesome. The photos below I took turned out better than I had hoped despite the poor light. 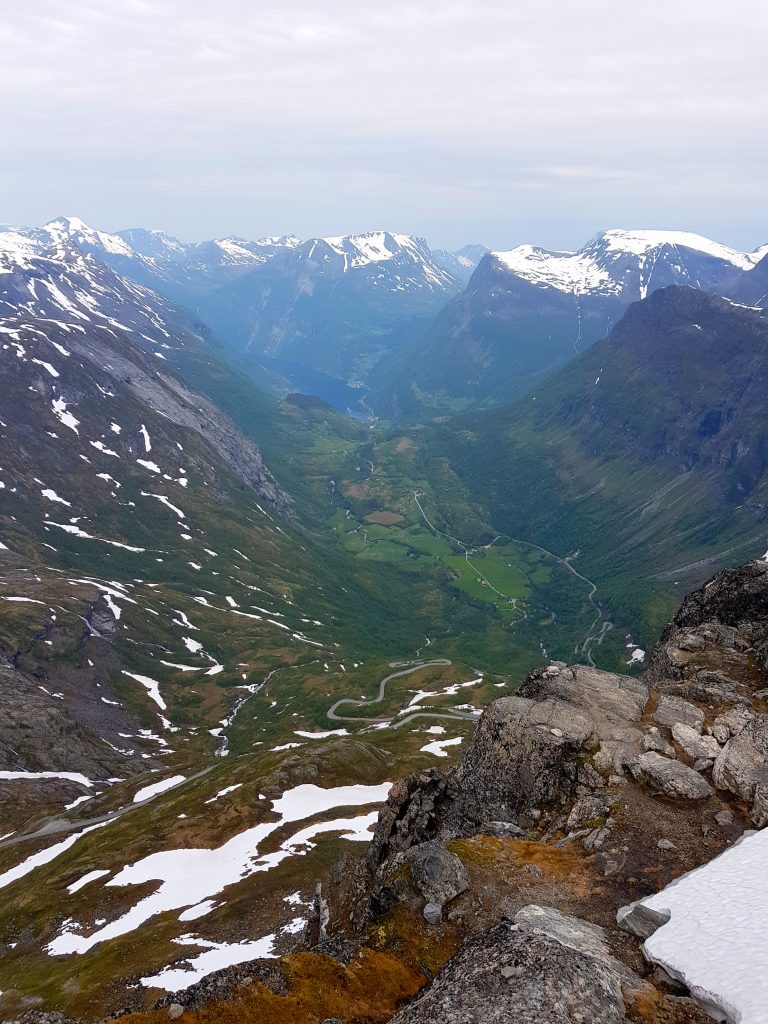 An amazing view from the Dalsnibba viewpoint

Lom, a stave church and another free night 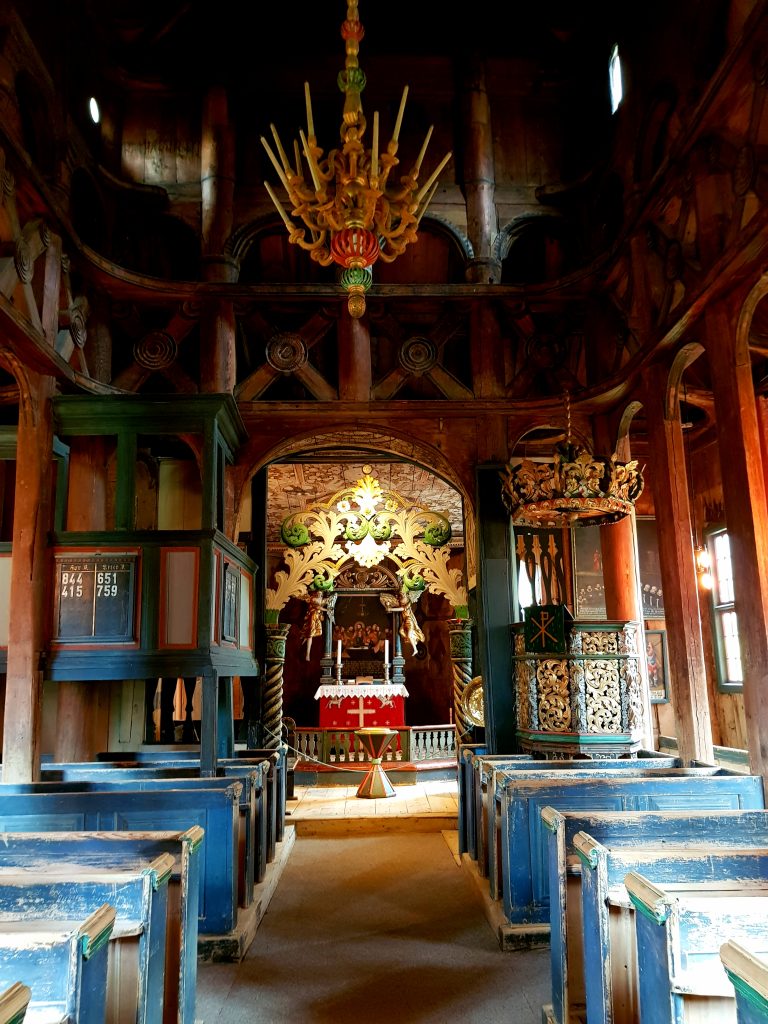 Lom is at the intersection of the E15 and RV55 and is the location of one of Norway’s largest Stave churches. A Norwegian Stave church is made completely from wood and even uses wooden pegs instead of nails. Parts of Lom Stave church date from the 1150’s and it was a masterpiece of joinery and quite ornate inside. The Esso station in the town also has a free motorhome service point which was a welcome sight and we were soon on our way again heading west again on the E55 towards Sogndalsfjora

The RV55, another of Norway’s official tourist routes, took us past raging rapids, deep gorges and lakes. The snow poles running on either side of the road were a reminder that in winter these roads would be impassable. At one of  the several places of interest we stopped at we got talking to a French couple in a 4×4 super cool camper van and we exchanged information on where we had both been, which is always a good thing to do.

Monday night was spent in another free camping area for which we are now loving Norway for. It’s not on any apps. But we came across a perfect parking area on the RV55, right beside a fast-flowing river and surrounded by mountains, one of which is Norway’s highest mountain, Galdopiggen, at 2469 metres high. The only downside was that we had no phone signal at all, although some would say that’s a good thing.

Driving a motorhome through Norway is proving to be an amazing experience. 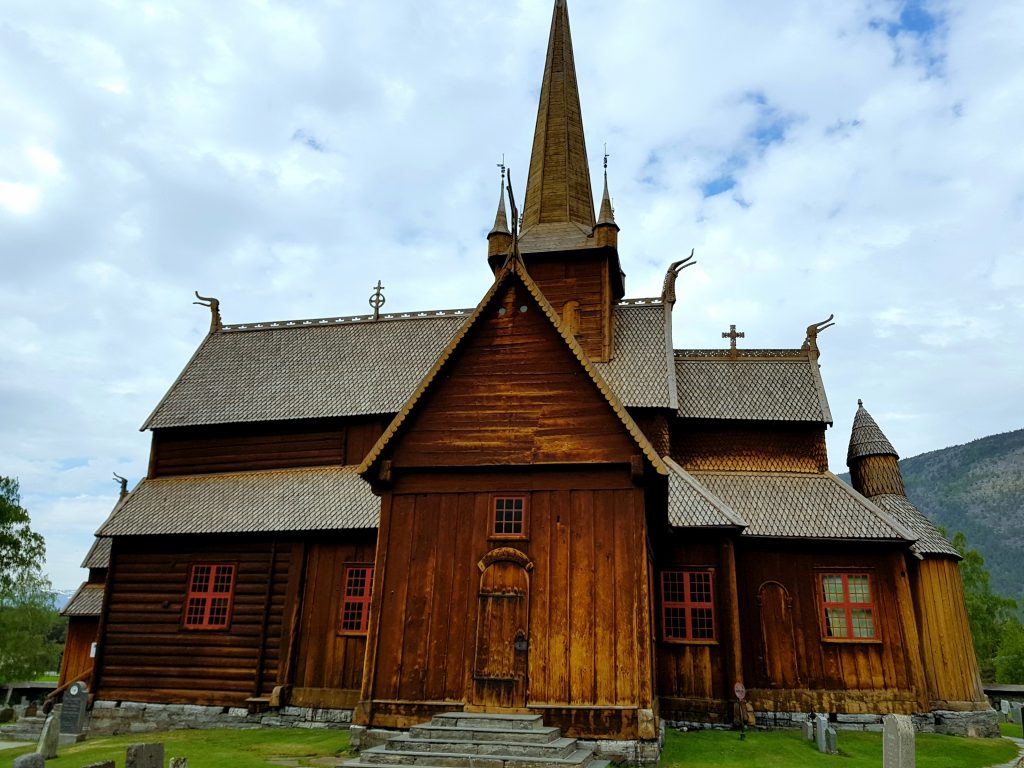 The Stave church at Lom, Norway. Made entirely of wood.