Netherlands in our motorhome

Dokkum – The prettiest town in Europe? 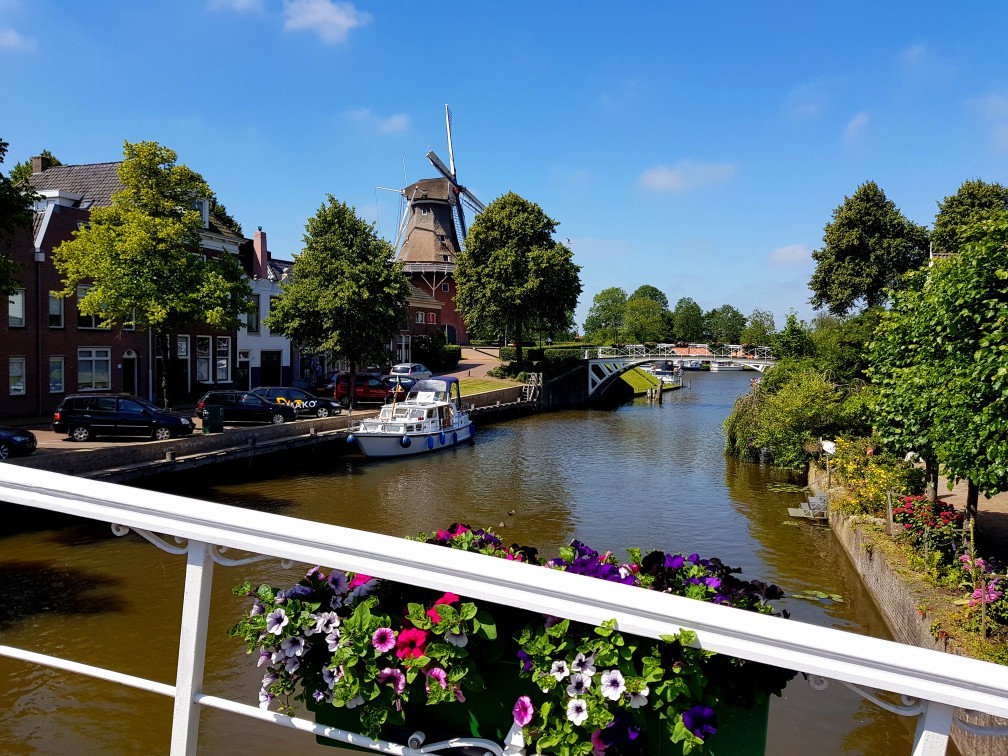 Dokkum in The Netherlands has been awarded the “Home on Wheels” prettiest town award. I had never heard of Dokkum and you probably haven’t heard of it either but let me tell you about this place. Before I describe Dokkum to you though I’ll just fill you in on where we have been since touring Norway in our motorhome.

Dokkum – The prettiest town in the world?

After experiencing the cultural highlights of Oslo we boarded the overnight Stena Line ferry from Oslo to Frederikshavn in Denmark. It was busy and the cabins were looking a little tired, but the route south through the Oslo fjord was spectacular. The Oslo fjord is 120 km long and the trip takes you past many islands. We looked at the scattered wooden huts on these islands with envy and tried to imagine what it must be like living in such an isolated and beautiful place.

After being woken by the ships announcer at 6am we didn’t have time for breakfast and were driving off the ferry at 7.15am. No border checks and straight onto the E45 heading south. The effects of lack of sleep soon materialised and I couldn’t stop yawning so we made several stops before deciding to spend a free night next to the marina at the Danish town of Aarhus. It’s well worth a visit to Aarhus just to explore the town and our overnight parking place was only a 20 minute walk to the town centre, which is a mix of modern and historical buildings. 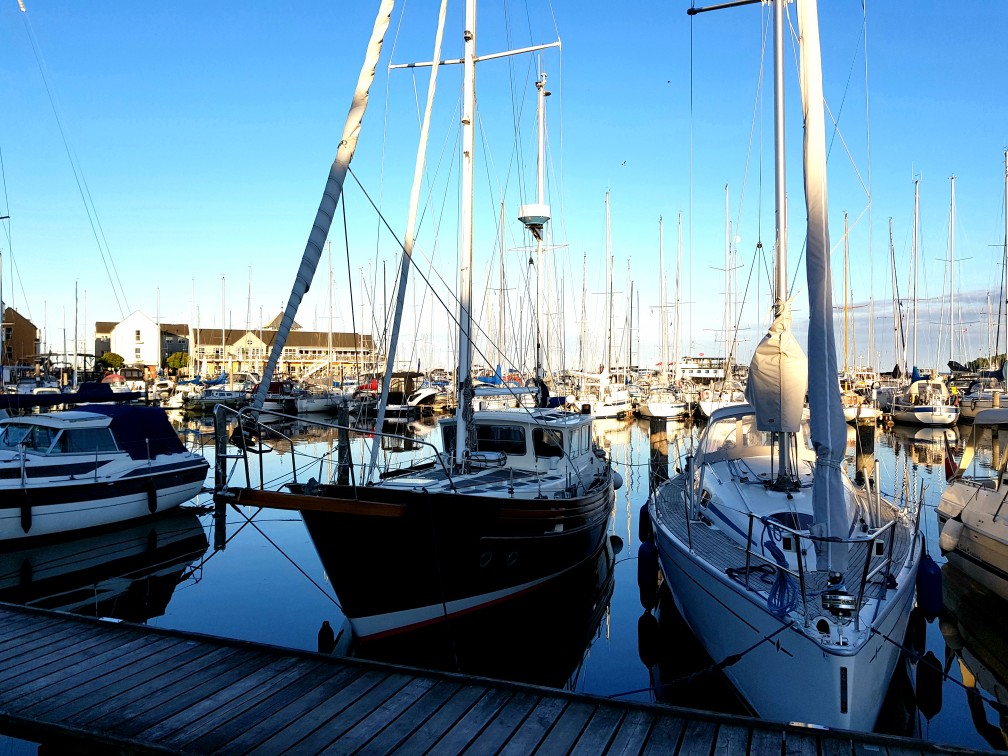 The best and worst of Germany in 24 hours!

After our free overnight stay in Aarhus we drove the next day into Germany and found a brilliant free purpose built motorhome Stellplatz right next to a large shopping mall in the German town of Flensburg. This was our chance to stock up with beer, wine and some food after expensive Scandinavian food prices. The supermarket here was huge and is one of the best supermarkets I have ever visited. Amazing choice and cheap prices, and we could even wheel our shopping trolley from the supermarket to our motorhome overnight parking place!

The Germans seem to plan ahead and they had even installed electric bike charging points in the car park, something I have never seen before. 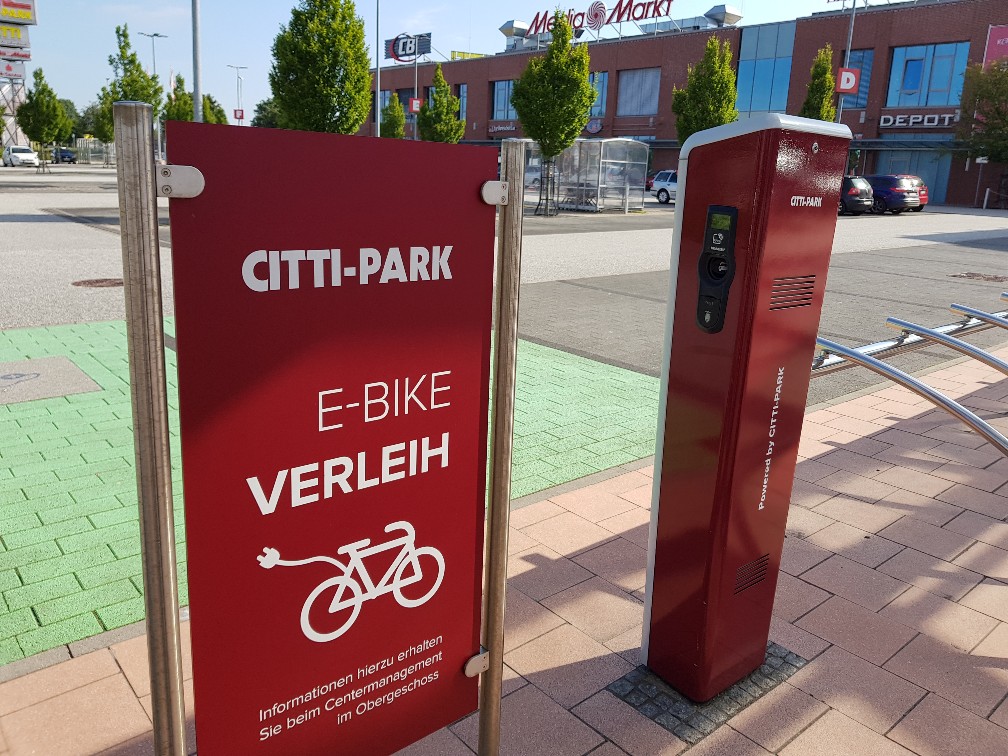 The next day we planned to drive 2 hours into Germany and stop close to the Dutch border. This involved driving on motorways around the German cities of Hamburg and Bremen. An easy drive you would think unless you have actually driven close to Hamburg. If you have you will know that huge new motorways are being built around these cities and the roads are in chaos. 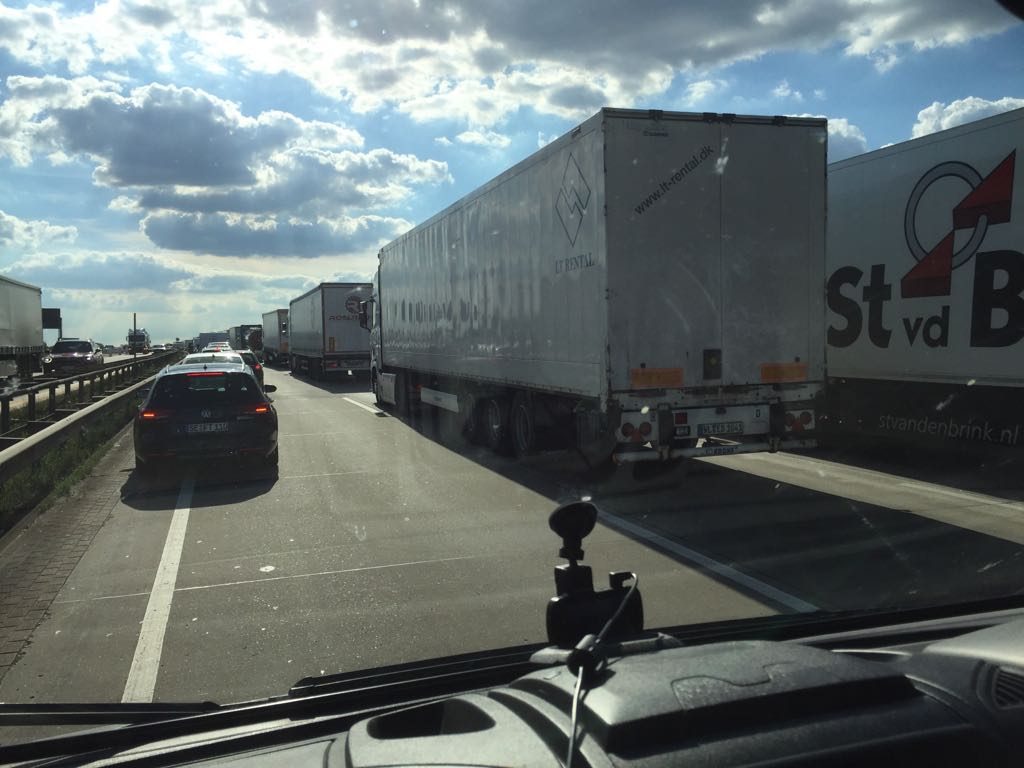 It was during this drive around Hamburg, on the same day that Germany were knocked out of the World Cup, that I realised that Germany was not good at everything! A 2 hour drive took us 6 hours because a road was being resurfaced and 4 lanes had to filter into 1 lane. This resulted in a 50 mile queue in 30C temperatures. Not a pleasant experience. A sign of how big the German economy is though was that the two inside lanes in the motorway roadworks queue were full of HGV’s. There were literally thousands of them all gridlocked and some had decided to park on the hard shoulder for the night.

Dokkum – the town you haven’t heard of.

After another free night in the ordinary German town of Delmenhorst we joined the motorway heading towards The Netherlands and found a place called Dokkum on the map that looked interesting so we decided to head there for 2 nights so we could do our washing. Finding this place though turned out to be a nightmare and we discovered that many roads in The Netherlands are very narrow and often run alongside canals. Little did we realise that our satnav was about to give us a very stressful experience. It turned out many roads had been closed in the area. Our satnav told us to turn down a residential “no through road” and this caused a local resident, who was gardening, to give us very dirty looks. Our satnav also tried to tell us to turn down a cycles only road, and took us to a dead end with only a pedestrian bridge over a canal. Having consulted a real map we were eventually able to navigate to our destination and we celebrated our arrival in Dokkum with a beer from the cheap German supermarket. 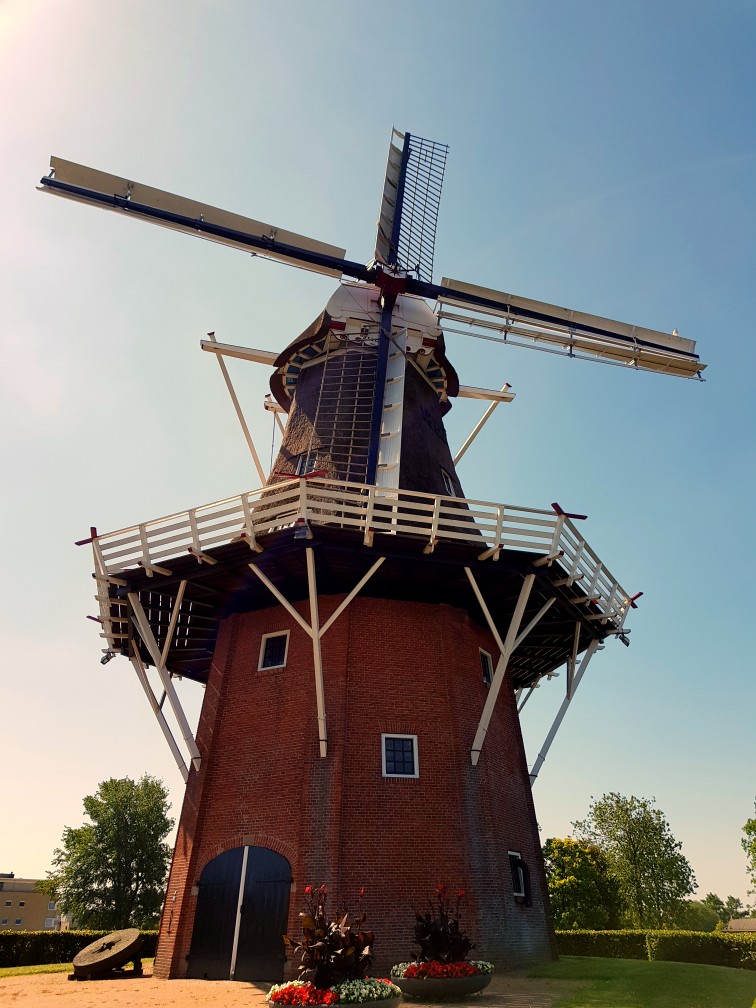 Choosing to stay in Dokkum turned out to be a good call because Dokkum is the prettiest town I have ever visited. The town is surrounded by canals and many buildings date back to the 19th century, all of which have been renovated in contempory style. I have never seen a town that is so pristine. The houses, gardens, flowers, boats and the plentiful street cafes make Dokkum look like a picture perfect place. The majority of the population get around on bikes and there are more bike lanes in the small town of Dokkum than there is in the whole of northern England. Cars are also outnumbered by hundreds of very stylish boats including some owned by local youths who cruise the canals listening to music. Local groups of children were also using the canals for swimming and jumping off bridges. 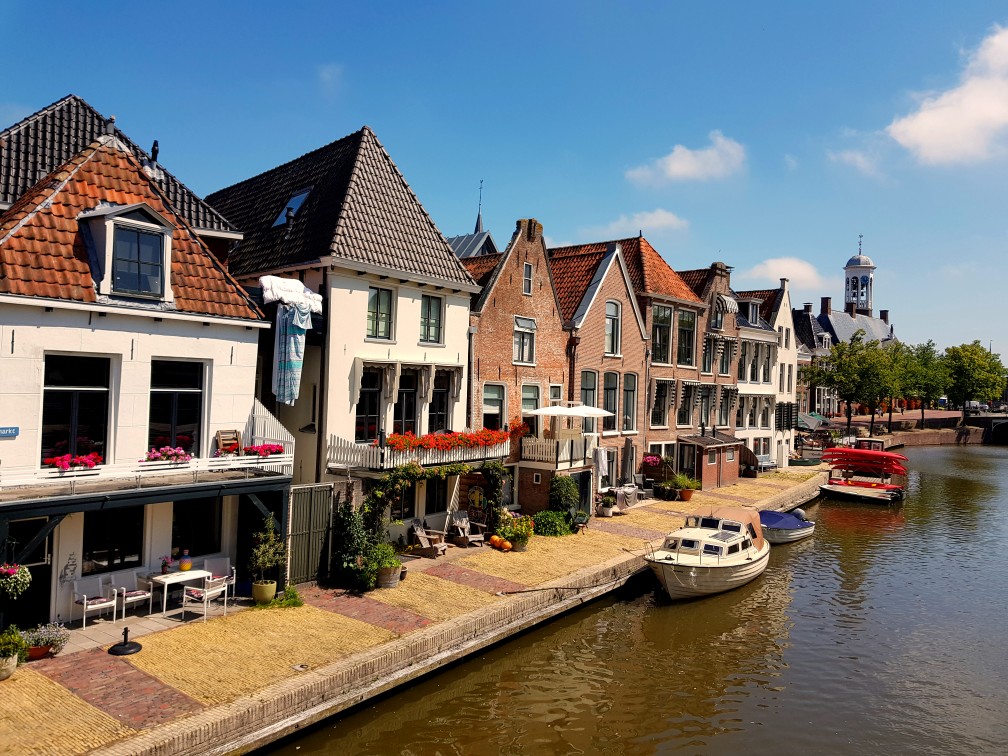 Canalside in the pretty town of Dokkum

After eating out at very reasonable prices for the first time in over 2 months there was a jazz band playing in the town square to greet us! The roads in the town are all block paved, which seems to be the style all residential communities are built in, but I’m guessing this is a deliberate policy to encourage cycling rather than the use of cars. A great idea in my opinion.

The Netherlands as a tourist destination. 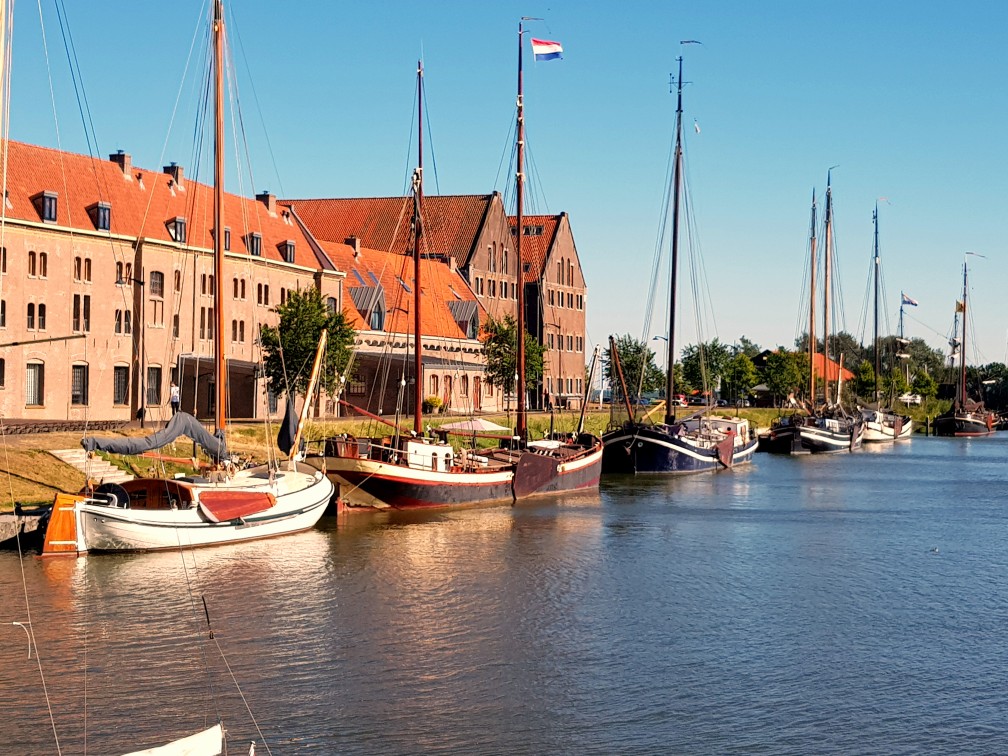 Hoorn in The Netherlands

After 2 nights in the picture postcard town of Dokkum we drove south on the A7 and used the 20 mile long Afsluitdijk causeway that was contructed between 1927 and 1932. This causeway was contructed across an inlet of the North Sea to create a freshwater area. Having decided to stop at the historical town of Hoorn for the night before catching the ferry the next day from Rotterdam I realised that I knew very little about tourism in The Netherlands, and having now seen a fraction of the country I’m very impressed with how many interesting places there is to visit. Hoorn for example is a former Dutch East India trading base with many buildings in the town dating to the 17th century. It has a huge marina, which is where we parked for the night, and is a bustling town  full of cafes, restaurants and bars.

Hoorn is a magnet for anyone interested in boats and the Dutch love messing about in boats of all sizes. I would certainly consider spending a longer period of time in The Netherlands and next time we will bring our bikes.

Finally, for this blog article, we have parked for the night in several marinas during our motorhome tour of Europe. Motorhomes are rarely given a big enough space between each other at marina parking and Hoorn is no exeption. There is an increased fire risk because if the motorhome next door catches fire then there is a risk that the fire could spread to other motorhomes that are parked close by. Good job we are only staying one night.

We left the UK on 27th April and have visited The Netherlands, Denmark, Sweden and Norway. It’s been an exiting motorhome adventure, with the obvious highlight being our motorhome tour of Norway and you can read my guide to touring Norway here. Next stop is the UK and the Rotterdam to Hull ferry. We are excited about seeing our family after 2 months out of the UK. 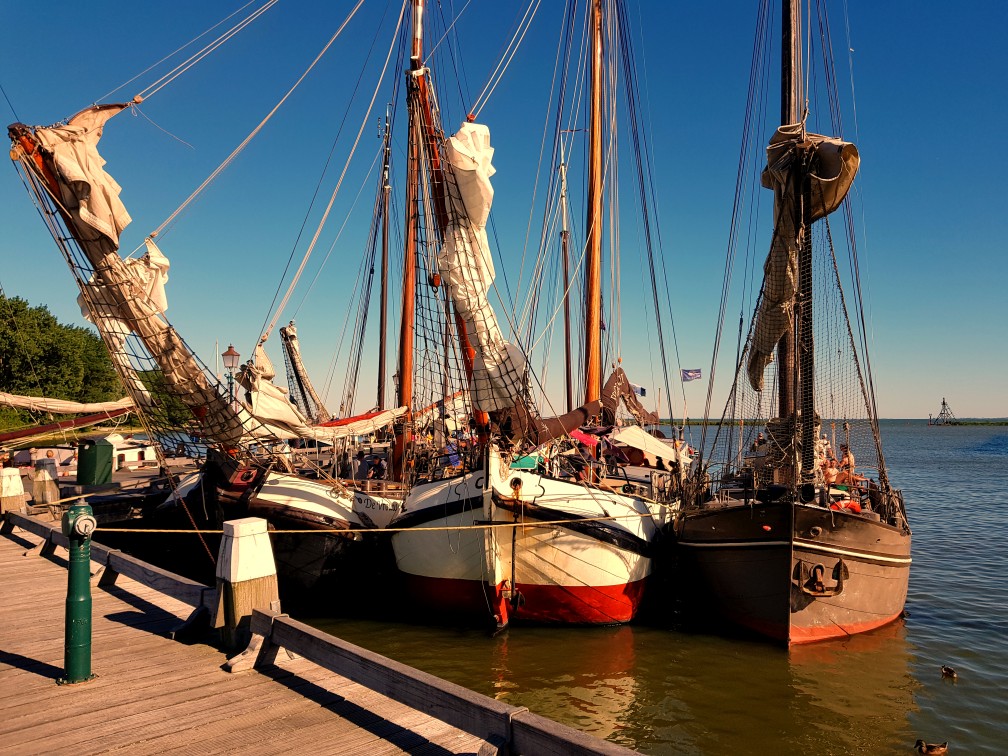 Stylish wooden boats at Hoorn in The Netherlands 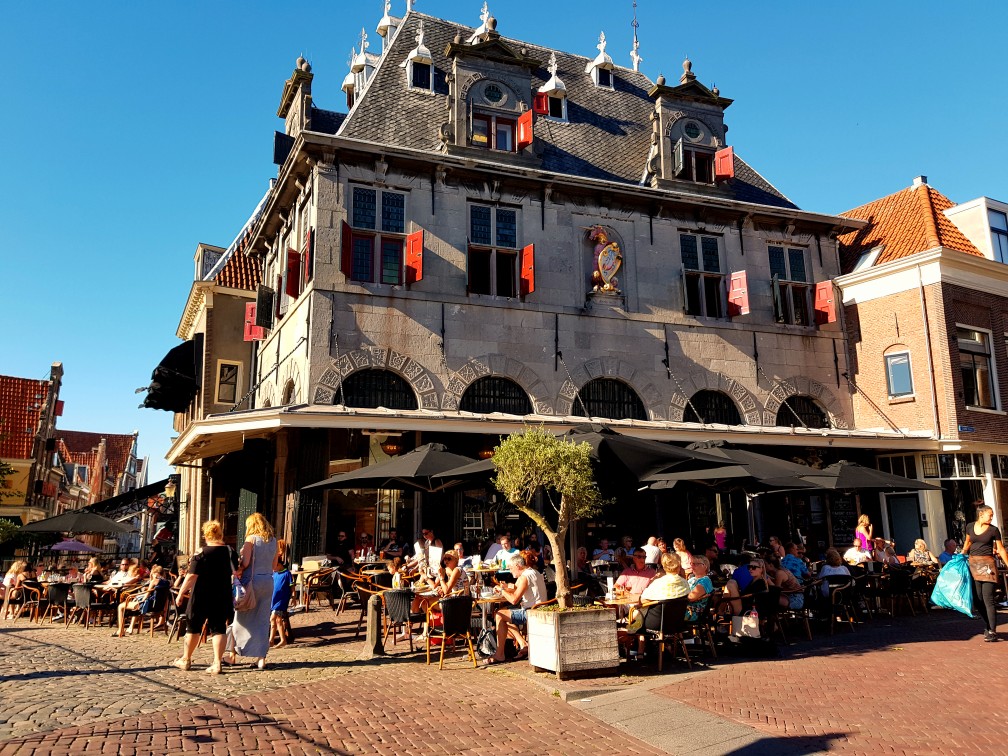 One of the many cafe/restaurants in Hoorn. 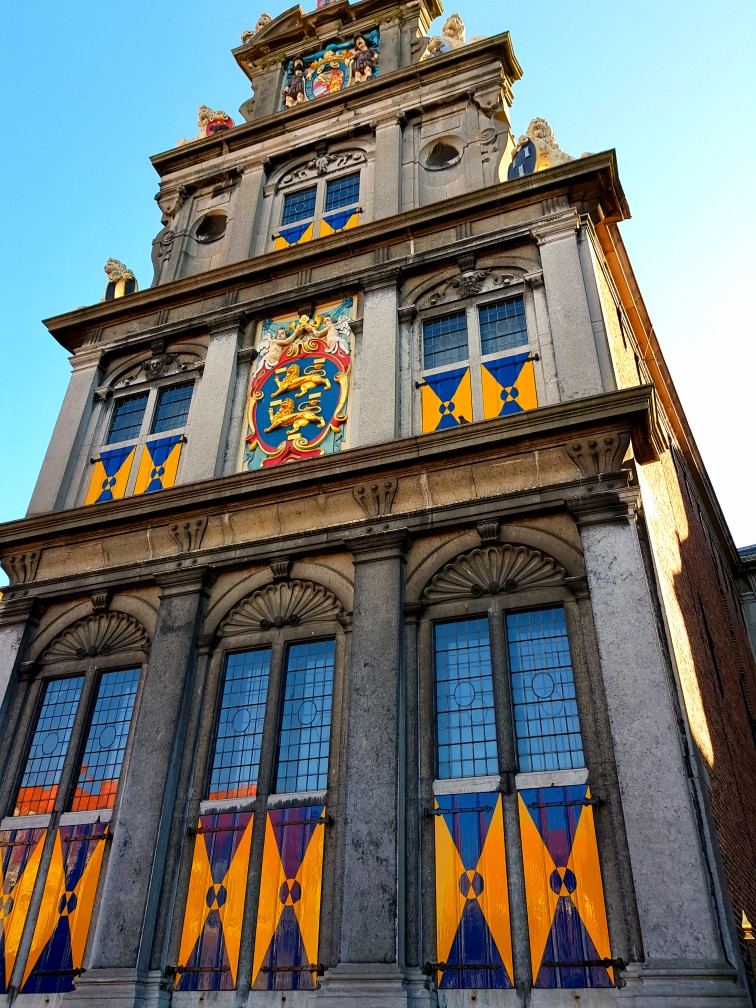 One of the old buildings in Hoorn