First week in our motorhome

When we decided to tour Scotland with our motorhome we didn’t expect good weather and as I writ e this blog the rain is torrential. In fact I think it has rained everyday and we have had gale force winds too, although we have had some blue skys. I suppose that this is a typical Scottish summer! After our first week in our motorhome this hasn’t dampened our enthusiasm because we have had views over fantastic mountains and at the moment we are next to a river that leads into beautiful Loch Tay although the mountains are covered in cloud and the river is pretty high!

Having been on the road now for just over a week we have decided to spend four nights on one camp site over the August Bank Holiday and it’s nice not to drive everyday like we have been doing so far. In just over a week we have driven about 1,000 miles although about 300 of those miles have been enforced on us because we have had a couple of minor faults that needed fixing and this meant that we had to return to the motorhome dealer in Kendal to get them sorted which was a pain in the backside.

This is a brief summary of where we have stayed so far:

Wednesday 16 August 2017 – New England Bay, Port Logan in Dumfries and Galloway. This is a coastal site on the shores of Luce Bay and we had great views looking out to sea, although we did have 40 mile an hour winds! 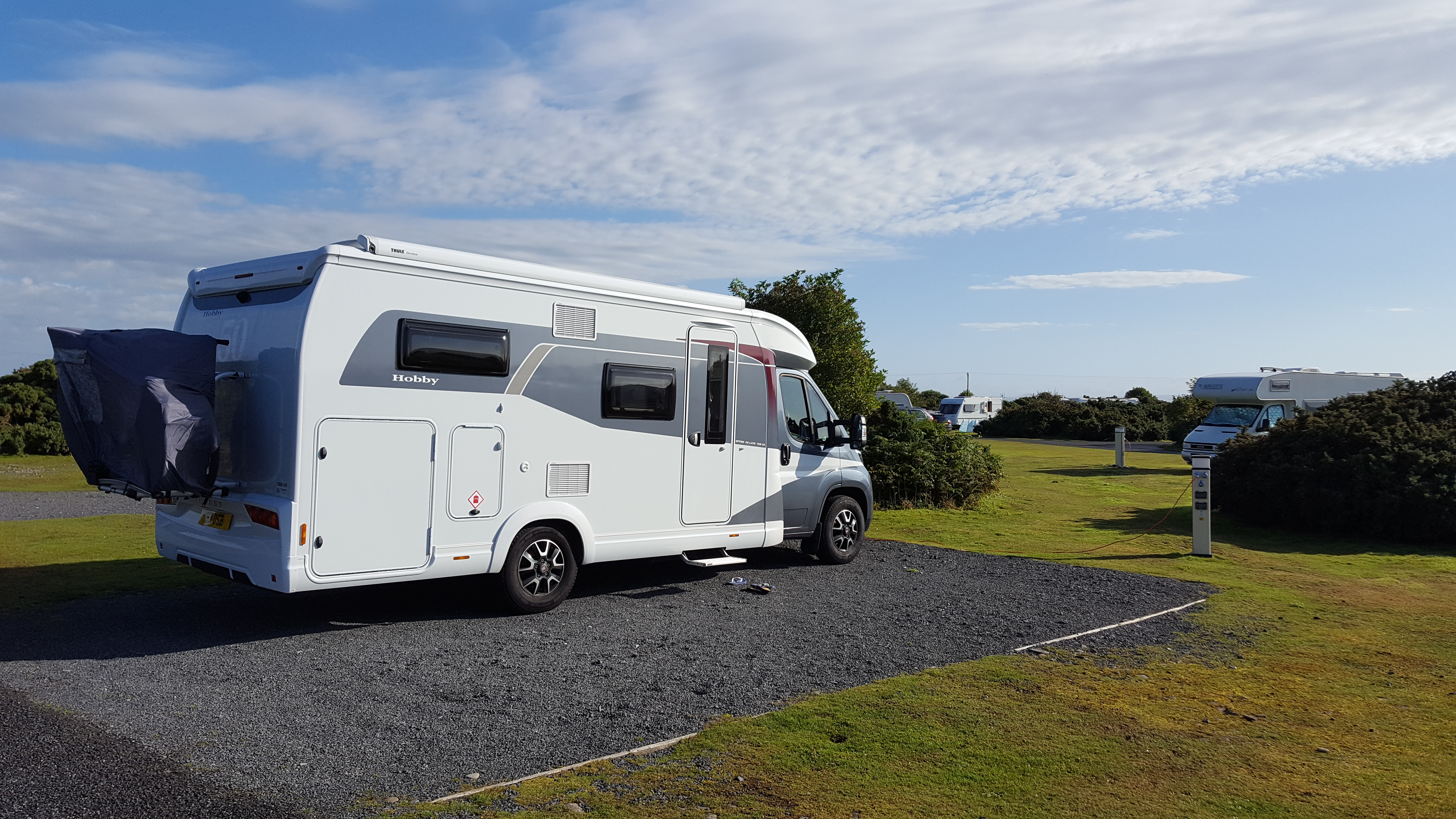 Friday 18 August – Galloway Point, Port Patrick. This is the first time I have visited Port Patrick and it’s a lovely little harbour village with an interesting history. The coastline is rugged and whilst we we there the sea was very rough and in fact, over the last 150 years there have been more than 70 shipwrecks. The worst tragedy in the vicinity took place on 31 January 1953 when the Stranraer-Larne  ferry, Princess Victoria, sank with the loss of 134 people. 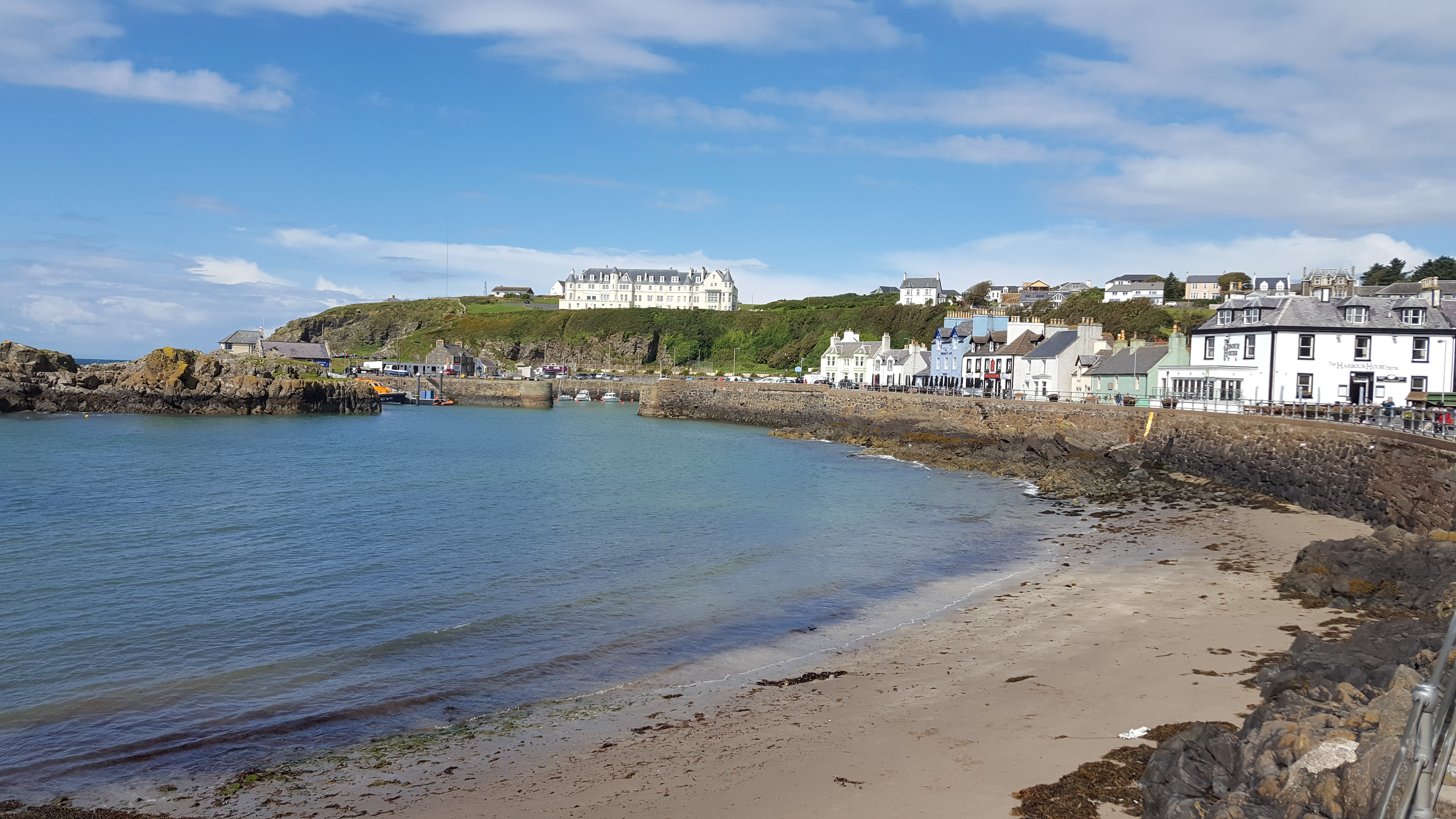 One of the good reasons to own a motorhome is that you can be self sufficient. We have fresh water, cooking facilities, a fridge, toilet and shower. We also have a solar panel with two leisure batteries, which gives us enough power for several days if not longer. So, with a sense of adventure and my Yorkshire attitude to spending money we decided to have a free night parked up in a forest clearing in the Galloway Forest. This is an official dark sky area which makes it perfect for gazing at the night sky but this being Scotland it rained a lot and there was no sign of a clear night. Surprisingly, we slept well and woke up the next morning having had no worries about what might be lurking in the forest! 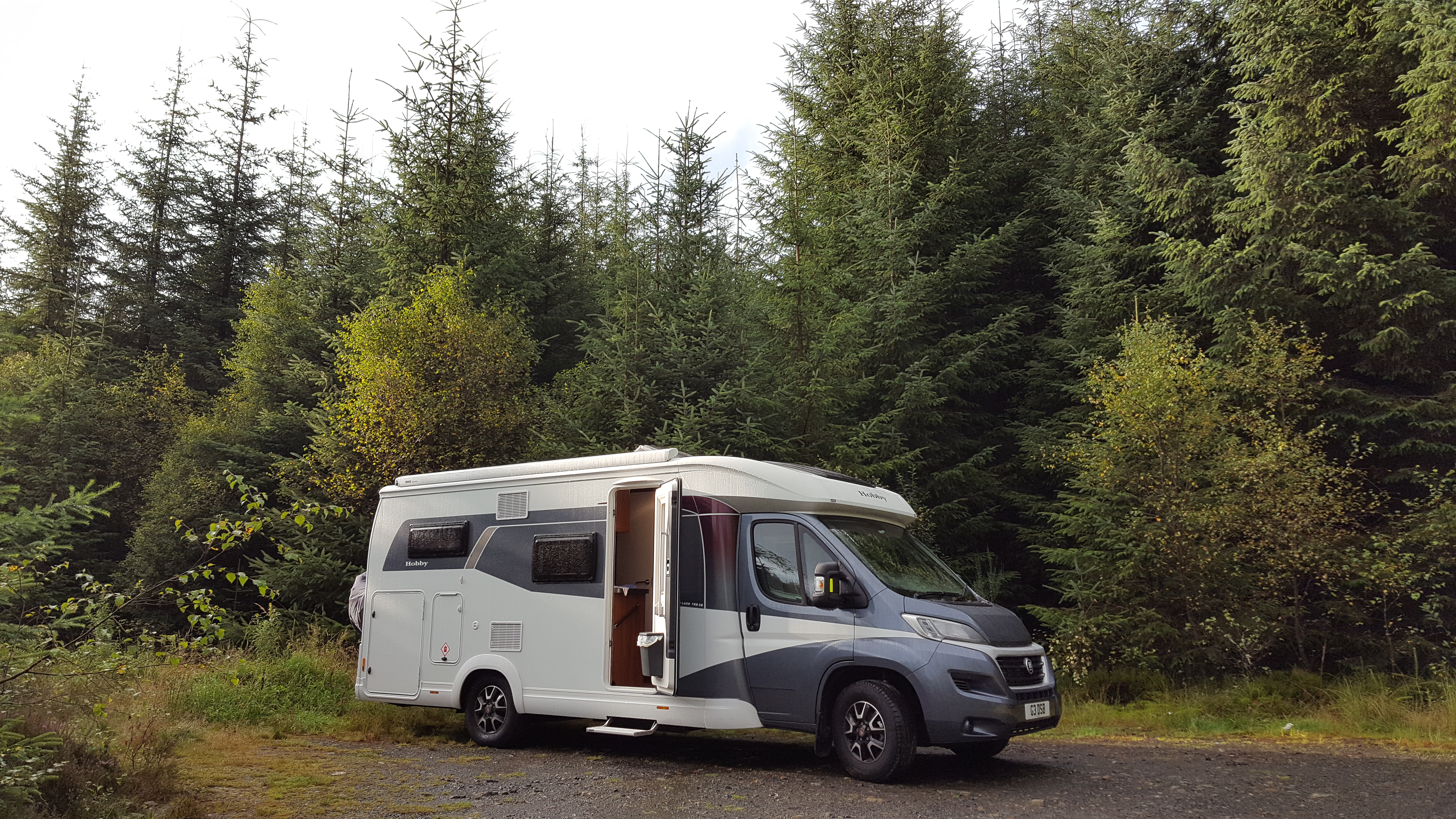 Wild camping in the Galloway Forest

Back to England to sort out a leaking water pump and fantastic views of Blencathra. Several years ago I climbed Blencathra with my brother. Blencathra, and Sharp Edge is one of the most exciting and feared ridge walks in Britain. 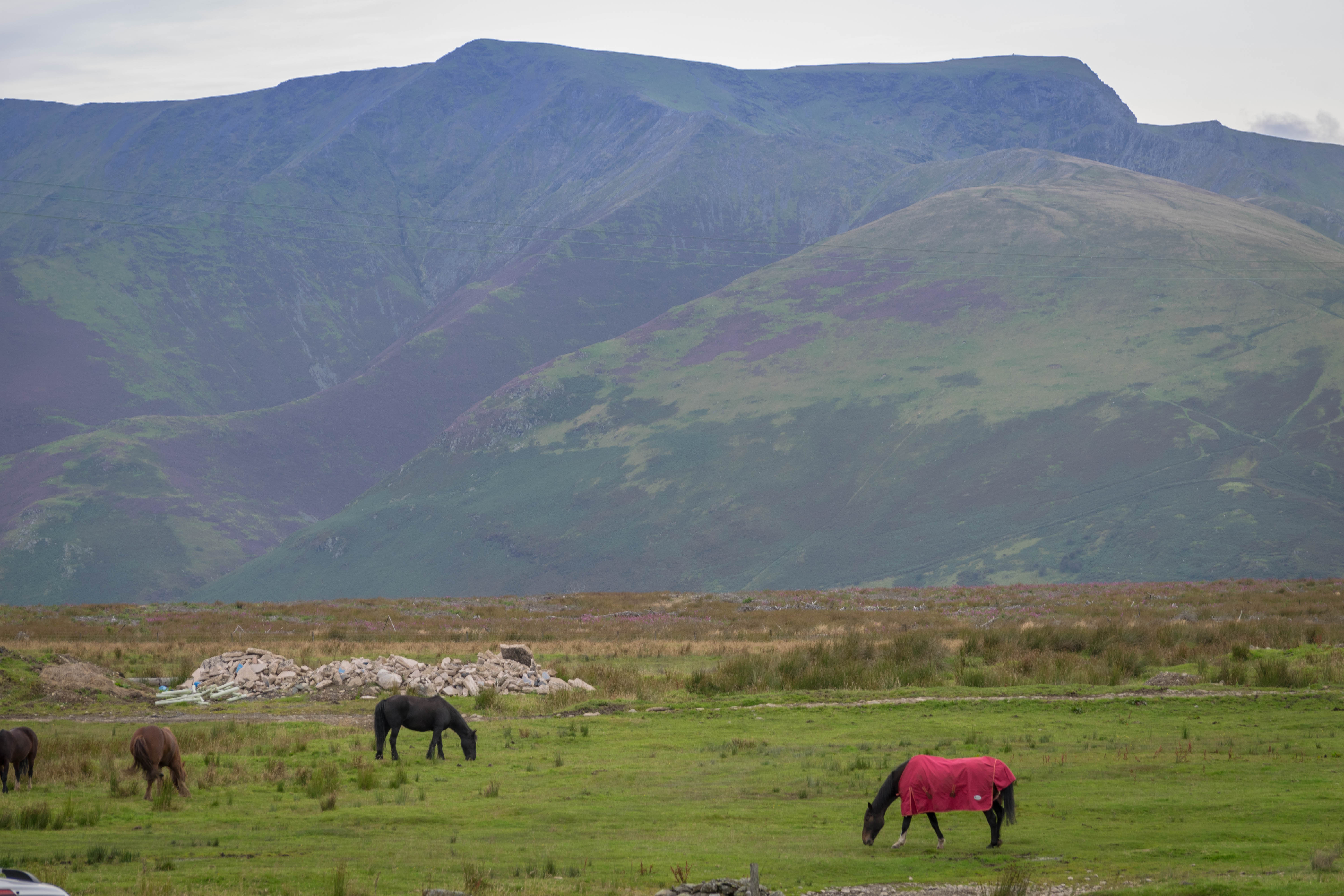 View of Blencathra from our motorhome

The Caravan and Motorhome Club has hundreds of campsites that they called Certified Locations or CL’s. These locations can be anything from beachside camp locations, pubs or farms. They accommodate a maximum of 5 motorhomes and have very basic facilities.

A fantastic motorhome stop in the village of Ingleton, close to the famous waterfalls and Ingleborough, one of the Three Peaks. With a fantastic toilet and shower block everything was well organised and spotlessly clean.

After a week on the road we feel that we have made a good choice of motorhome, ironed out a couple of minor niggles and I have not had a problem driving it. Next week we are heading further north and plan to do the Scotland NC5oo. 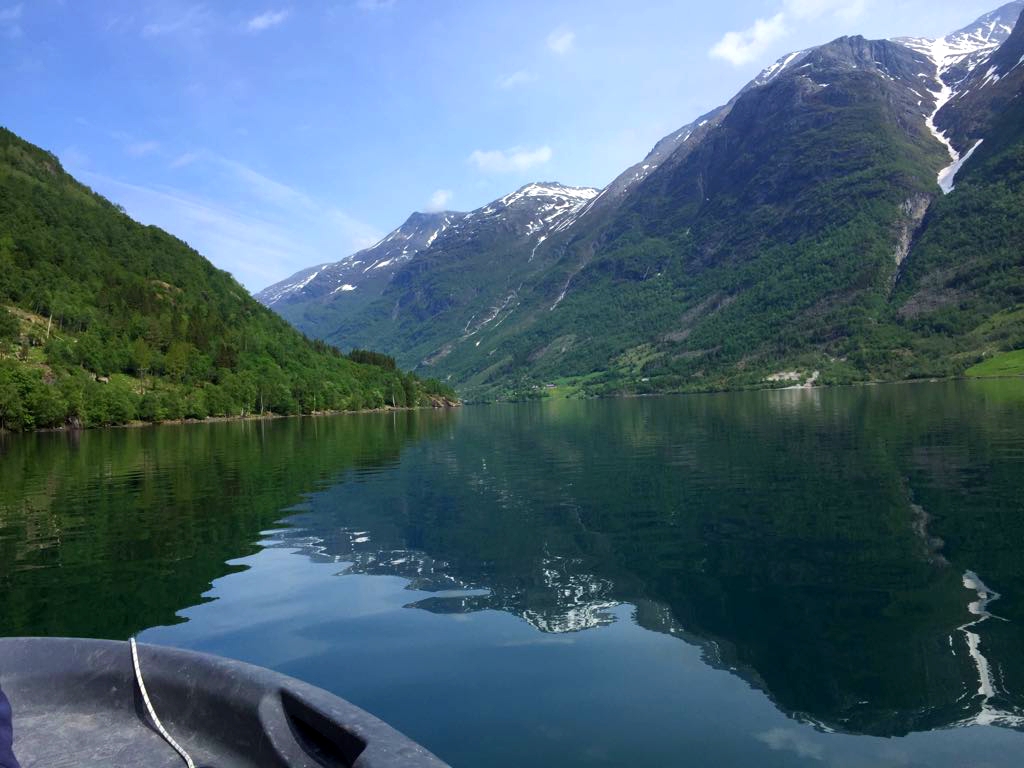