Scotland in a motorhome 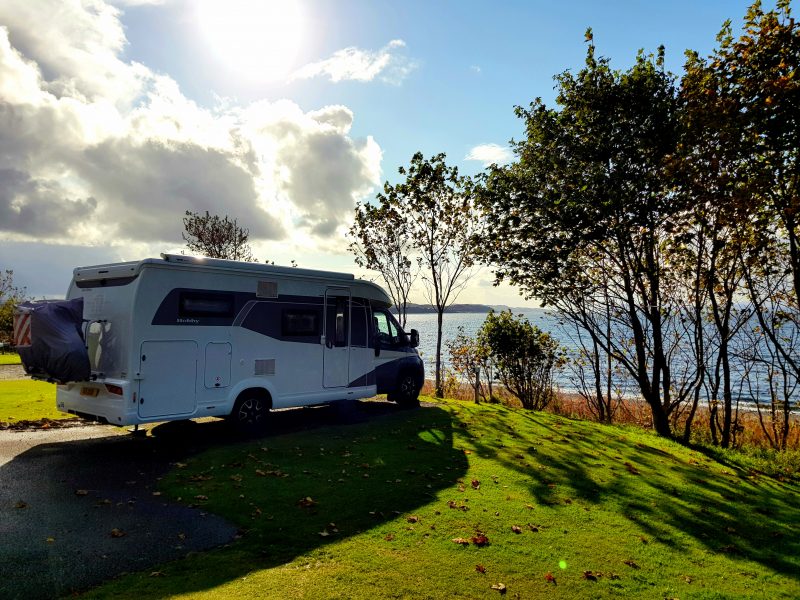 After cancelling our motorhome trip to France this September we had the discussion about where we could go instead. We loved our NC 500 motorhome tour 3 years ago so we decided we would head north again and do a mini Scotland motorhome tour. For information about the NC 500 road trip take a look at the excellent Visit Scotland website. So, we set off on a 10 day tour of the west coast of Scotland hoping to imagine we were in France. The heavy rain we were soon to get quickly reminded us that we were in Scotland and not France!

Heading north on the M6 we decided to spend a night on the caravan park at Tebay Services and we were pleasantly surprised how good it is. Nestled amongst pine trees and with a clean toilet & shower block (which we didn’t use) it is very similar to a French ‘Aire’ rather than a traditional UK caravan park. With spaces for about 40 motorhomes there were only 2 other vehicles there and it is only a 5 minute walk to the excellent farm shop and restaurant. £22 for the night included a £3 voucher to use in the restaurant. All pitches have electric and fresh water tap and there is also a drive over motorhome grey waste and chemical toilet emptying point.

Although it was tempting to take advantage of the excellent Tebay restaurant for a cooked breakfast, we opted instead for cereal and coffee in the motorhome before starting the scenic journey northbound on the M6 and M74. Our next stop was at the deserted Strathclyde Country Park Caravan and Motorhome Club site. It’s right next to the busy M74 motorway so expect some distant traffic noise but it makes a good stopover on the way to Scotland. After a walk around the large nearby lake we got caught in a heavy downpour on the way back and settled in for the night.

The next morning we left a deserted Strathclyde Country Park and headed for Oban using the A82 which runs along the shore of Loch Lomond. This road was not as enjoyable as I had hoped; we could see very little of Loch Lomond because of all the trees and at times the road is very narrow and winding. In a car, narrow roads are fine but in a 2.3 metre wide motorhome narrow roads can be challenging especially when faced with an oncoming juggernaut travelling at 50 miles an hour, and who refuses to slow down for you! Often we passed oncoming vehicles with what seemed like a couple of inches between us!

After crossing the Connel bridge just north of Oban we soon arrived at North Ledaig campsite and the warden showed us to our pitch, which was in a stunning location only a few metres from the sea and with the island of Mull viewable in the distance. The tranquillity and natural beauty were superb, although we had periods of heavy rain as you can see from the video below!

A visit to Oban

Described by some as the seafood capital of Scotland Oban was only a small village until 1794 when the Oban distillery opened. With sea views, one of the most popular seafood restaurants is Eeusk, but we hadn’t booked on the day of our visit so couldn’t get a table. Instead we opted for fish and chips in another nearby restaurant. Oban has a very sheltered harbour and it is fascinating watching the fishing boats and the Calmac ferry come and go.

National Cycle Route 78 runs through North Ledaig campsite, as the 48 mile route connects Oban with Fort William. Most of the route we saw was off road so it is worth taking bikes if you are heading that way.

Bunree Caravan and Motorhome Club site is located between Oban and Fort William. It’s seen by many as the best campsite in the whole of the Caravan and Motorhome Club network. Having visited 3 years ago and seeing for ourselves why it’s so popular we were excited to be visiting again. The bad news though is that we could only book for 1 night because the site was fully booked. Nevertheless, we really appreciated the fantastic views across the loch and the mountains beyond. Pitches by the waters edge are very popular so the message is, book well in advance!

The Corran ferry to Resipole

The next stage of our Scotland motorhome tour took us the short drive to the Corran ferry where we took the 5 minute crossing of Loch Linnhe. (£8.80 motorhomes cost & no booking needed).

Heading for the very small village of Resipole via Strontian along one of the most scenic and dramatic landscapes we have driven through. The road takes you through a stunning mountainous area, Glen Tarbert. We were the only ones on the road at this point so we could meander along admiring the views, really taking our time in this amazing landscape. The road soon started to hug Loch Sunart and we had a lunch break at the waters edge, a fascinating sea loch with plenty of wildlife to enjoy. We called at Strontian, (where the element Strontium was found), to stock up our fridge and food cupboards, we had low expectations of a small village shop, but this place was an Aladdin’s Cave of goodies. We even managed to buy some of Anne’s favourite cheese, the Norwegian Gjetost, much to her delight and amazement. Gjetost is a brown cheese made from goats and cows milk. Fully laden, we carried on our route, and the road soon became single track and stayed that way for 5 miles until we reached Resipole Farm Holiday Park. The singe track road was far easier than we’d anticipated, it was well tarmacked, with plenty of decent sized passing places.

Resipole Farm Holiday Park sounds like a huge commercialised caravan site with a theme park, but it is exactly the opposite! Situated on the shore of Loch Sunart it is a small independent site in a stunning location, the perfect place for peace and tranquillity. We were lucky enough to have a clear night so we could see the night sky and the sight of so many stars was just amazing. We could also hear stags roaring as it was rutting season. It is a great place for wildlife but we were not lucky enough to see porpoises that we were told were often seen in Loch Sunart.

There are plenty of walks nearby as well as a wildlife hide. An attempt by us to climb nearby Ben Resipol ended in failure as the approaches to the mountain were too boggy so we turned back and explored the shoreline of Loch Sunart instead.

Through Glencoe to Killin

After 3 nights on the shores of Loch Sunart amidst the tranquillity and stunning scenery it was time to head back across the Corran ferry and to drive the A82 through the incredible Glencoe and Rannoch Moor area. We have driven through Glencoe several times over the last few years. It is one of the most scenic roads in the UK in my opinion, but we have been very unlucky with the weather the last few times we have driven that road and this time was again no exception. Heavy rain and low cloud meant that visibility was low and all we could see were brief glimpses of the many huge mountains lurking in the mist.

Glencoe, of course, is famous for the Glencoe massacre of 1692 when 33 members of the MacDonald clan were slaughtered. There is a visitor centre at Glencoe where you can learn about that infamous day. The area is also famous for walking and climbing as well as being able to see red deer and golden eagles. If you get chance to drive through Glencoe it is well worth doing, just pick good weather!

Killin is a pretty village that we last visited 3 years ago and is situated at the western end of Loch Tay, Sterling. The Falls of Dochart are the main attraction in Killin and it is also surrounded by beautiful mountains where there is plenty of walking. We stayed at Maragowan Caravan and Motorhome site which is only a short walk to Killin village and about a mile from the Falls of Dochart.

Home to another lockdown

We set off for home a couple of days earlier than planned; we’d hoped to see the Kelpies and the Falkirk Wheel, including an hour long boat trip but decided we should save this for another time. The Central Belt of Scotland was locking down rapidly and it felt wrong to be visiting the area. 2020 has been a year to forget as far as travelling is concerned. Our motorhome has not been used as much as we would like. Two long French trips have been cancelled this year, so as we drove south again we were happy to have at least done some short UK motorhome trips this year. Having a motorhome and exploring the wonderful UK in it is great fun and the novelty has not worn off; the opposite is true. Having the ability to drive off somewhere, park up and sleep in places with amazing scenery and escape this mad world we live in is important to us.

On the way south on the M6 we stopped in Penrith for a night before heading back to our motorhome storage place. It was a very enjoyable trip but it would have been better if it had been longer!