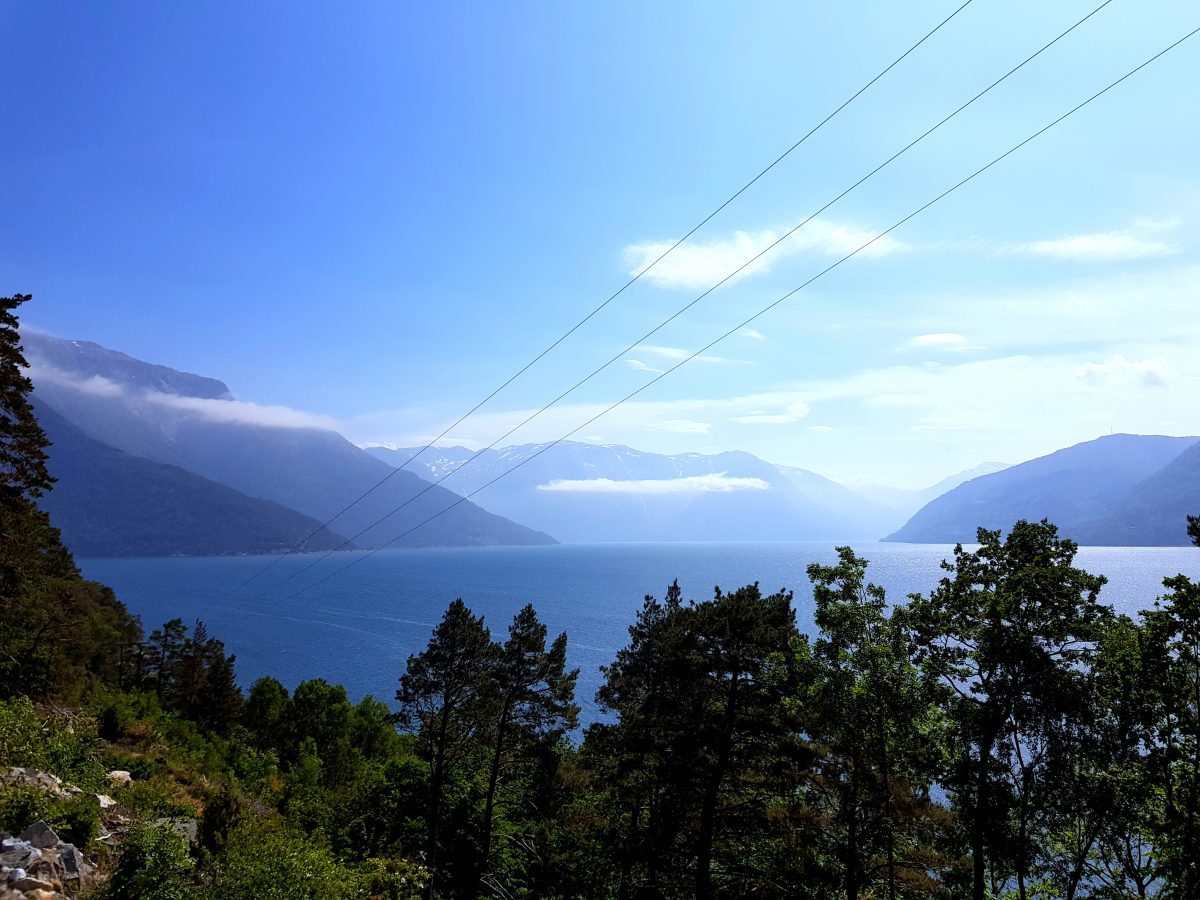 I think I have discovered the ultimate motorhome driving experience!  The amazing Hardanger Fjord tourist road  includes narrow mountain roads perched hundreds of feet above fjords, very long tunnels with roundabouts in, tunnels that spiral upwards through whole mountains, an incredible suspension bridge linking two tunnels and a road that runs over the largest plateau in Europe at 3,500 ft. This tourist route in Norway is not for the novice driver but it is sensational, as I will try and describe.

After paying nearly £30 per night on the campsite when we visited Bergen in our motorhome we wanted to find some free camping stops as we made our way to the next stage of our motorhome tour of Norway – Hardangerfjord.

It’s worth visiting Norway just to experience the incredible Vallavik  Tunnel and the Hardanger Plateau. Norway is a country full of fantastic driving experiences.

The weather so far in Norway has been superb. We haven’t seen rain for a month and today the temperature has been a hot 27c. As well as the excellent weather, the other phenomenon worth a mention is the length of the daylight hours. At 10.30pm I can still see blue sky and at midnight it is still light enough to read outside. In fact it does not get properly dark, which is great for our solar power.

Our search for a free night motorhome stay did not take long as we soon found a rest/picnic area just off road 48 next to Holmefjord. With a brand new toilet block with motorhome waste point it was a near perfect overnight stop. 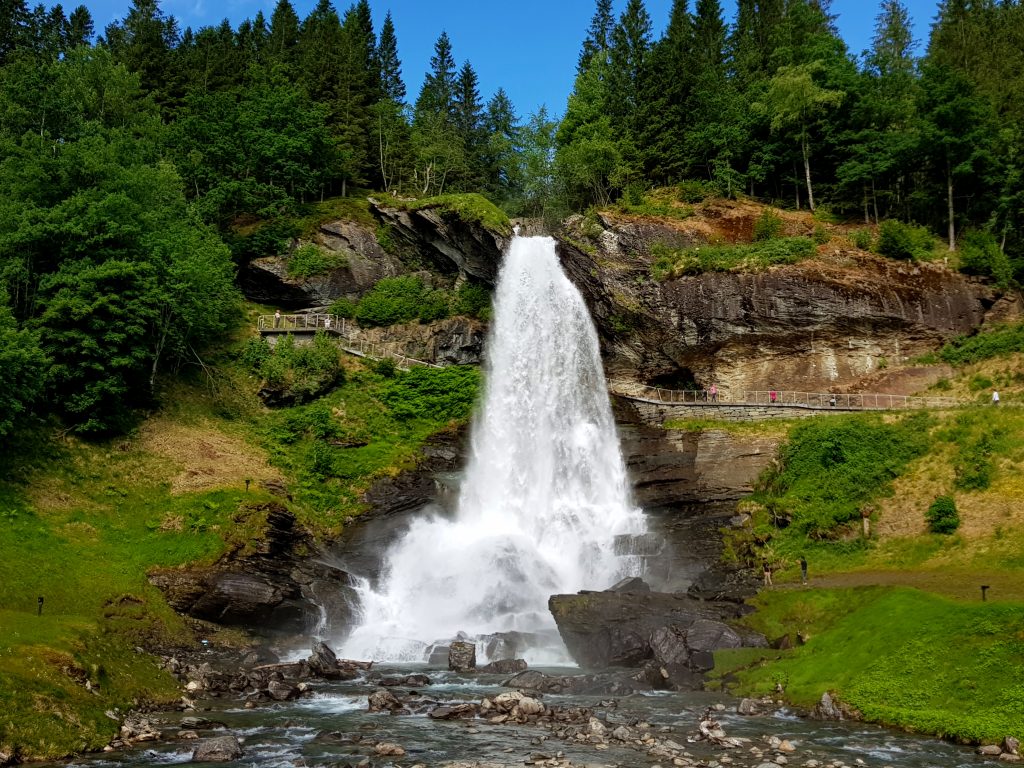 Steinsdalsfossen, Norway. You can walk behind this waterfall.

The next day we stopped at Steinsdalsfossen, a fantastic waterfall with the added attraction of being able to walk behind the waterfall. 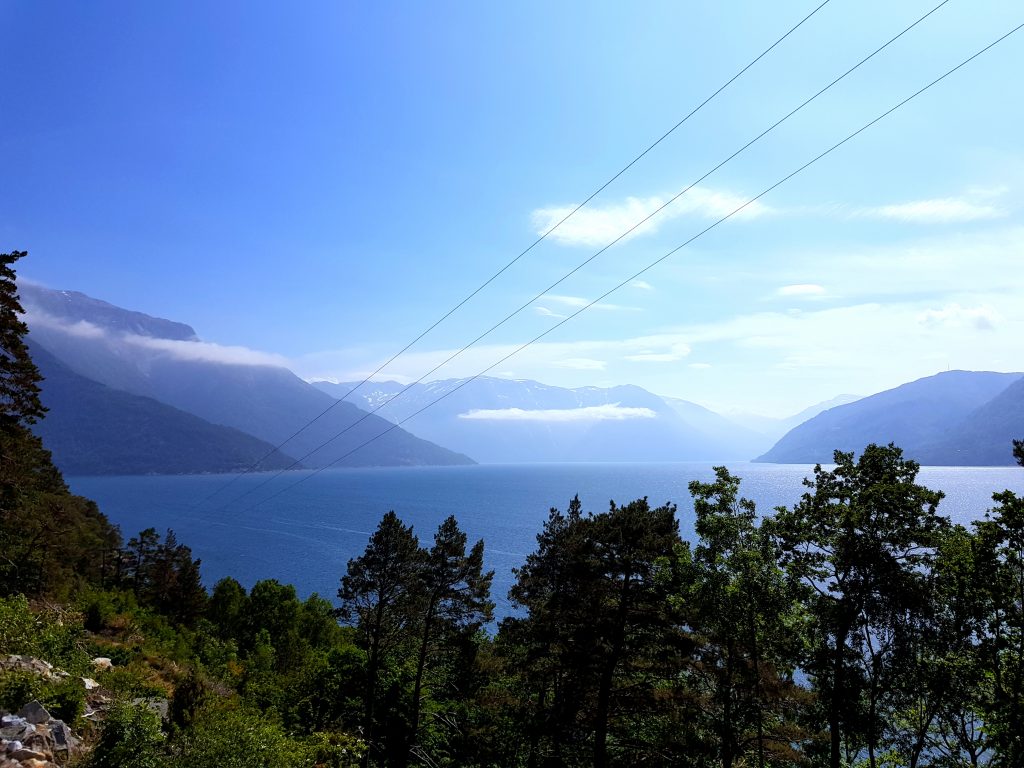 We joined the Hardanger Tourist Route at Øystese and followed the spectacular E7 road perched on the side of a mountain road hundreds of feet above the fjord below. This road is not for the novice driver or anyone scared of heights because this road takes in the best of what Norway offers in terms of scenery. It is single track road for much of its length, with passing places, and only a thin concrete barrier separating you from certain death! It’s impossible to see around corners and you have no idea if another vehicle is going to meet you. The good thing about driving a motorhome which is 2.8 metres high is that you can be seen, and although we met many cars and even several coaches coming the other way most gave way to us.

Take a look, below, at the You Tube video I took of the amazing Villavik Tunnel. 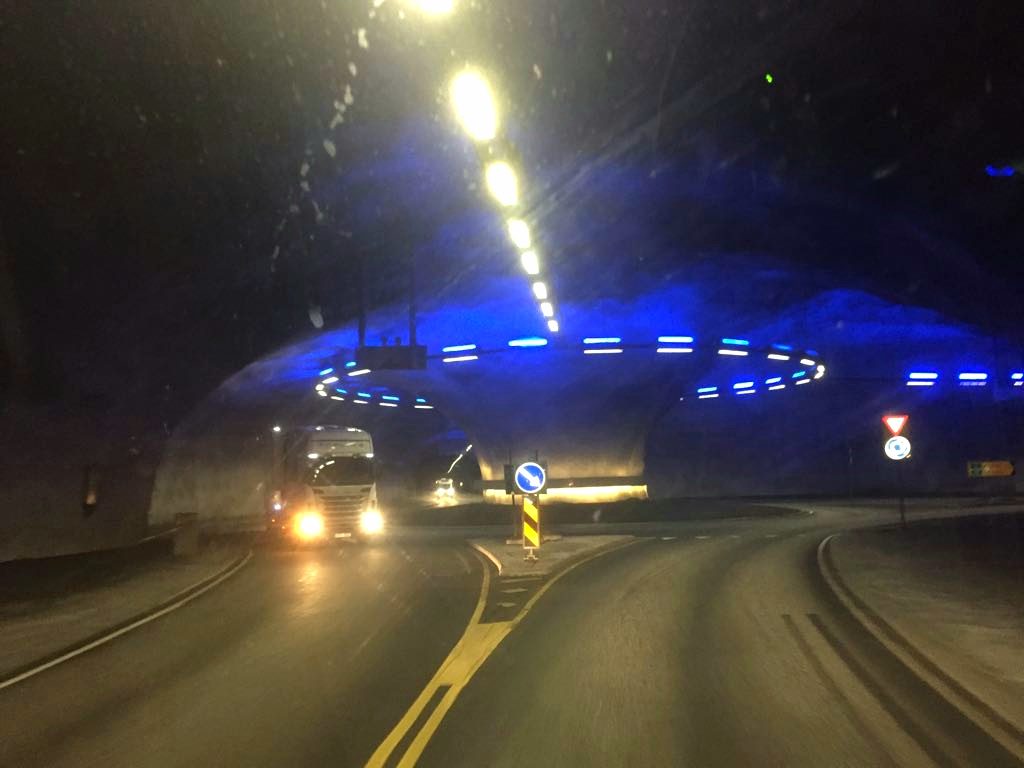 One of the roundabouts inside the Vallavik Tunnel in Norway.

Turning right at the village of Granvin onto road 13 took us through the 4.7 mile Vallavik Tunnel. This tunnel is one of the most famous in Norway because it  has two roundabouts in it with junctions and also the new Hardanger Bridge links another long tunnel, which makes for a truly spectacular drive. 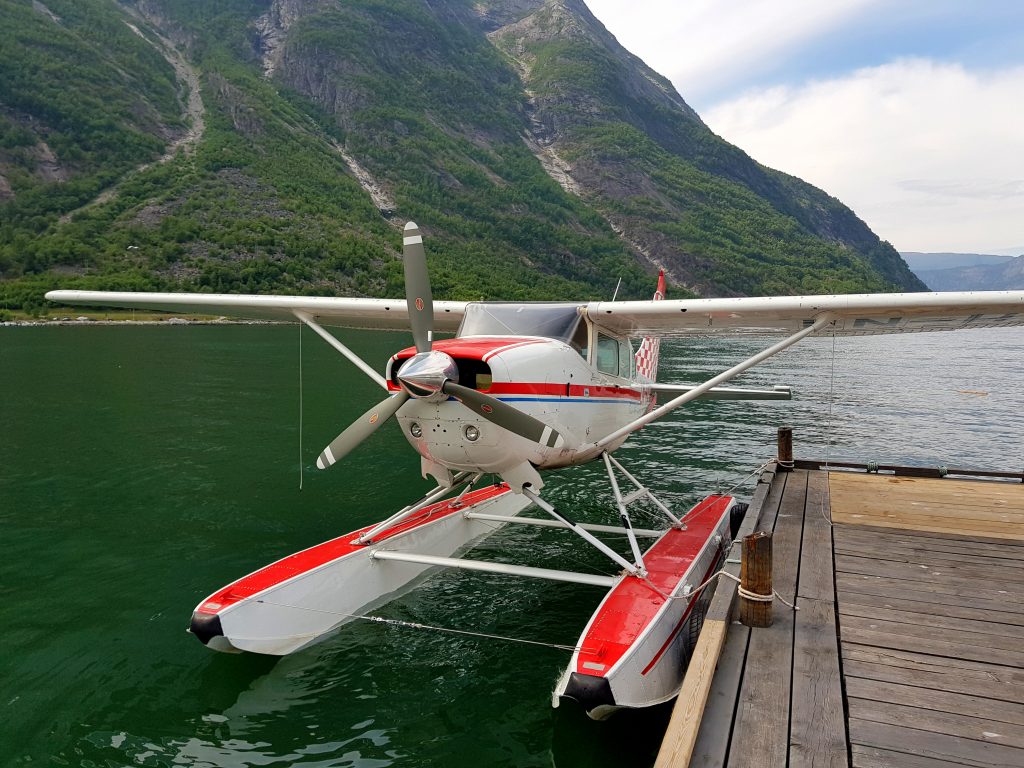 I would have loved a ride on this sea plane parked up at Eidfjord.

After a lunch stop at Eidfjord, where I was tempted by a sea plane flight, and where a Viking Sea cruise ship was berthed disgorging it’s cruise passengers into the tiny village, we continued our journey on the E7 road. A series of spectacular winding tunnels carved their way inside the mountain passing Vøringfossen, which was unfortunately shrouded in low cloud as by this time the hot weather had given way to rain and cloud. 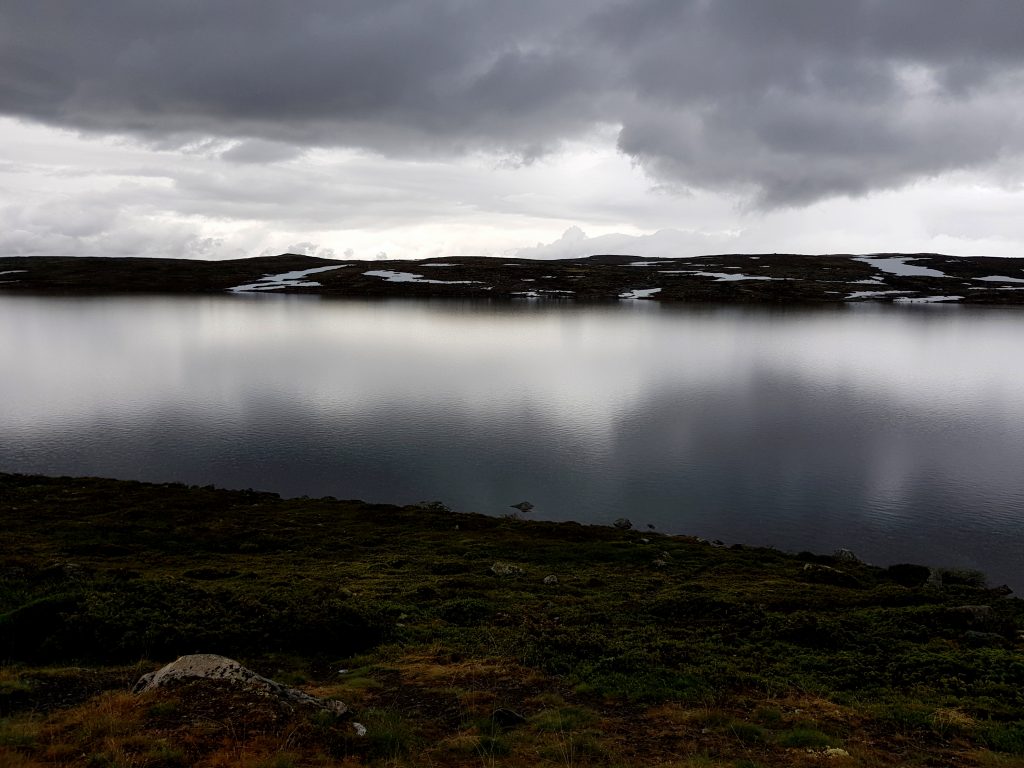 It was a dark and gloomy start to the day when we drove over the Hardanger Plateau.

Try to imagine one of the wildest and remotest places on Earth and that is how I would describe the Hardanger Plateau. It has an area of of 2,500 square miles and an average elevation of 3,500 ft. It is the largest mountain plateau in Europe. The land is strewn with boulders, lakes and small pools of water which makes it impossible to walk far unless a marked path is used. A network of paths connect mountain lodges some of which have honesty boxes whilst others are staffed. Despite the temperature of only 8c on the top of the Hardanger Plateau we found somewhere that looked suitable to park for the night and together with another motorhome that arrived we spent a comfortable but chilly night.

The terrain will get less dramatic from now on as we head east. We will be visiting Anne’s cousin who lives north of Oslo before reaching Oslo itself where we will spend a few days exploring before catching the ferry to Denmark. 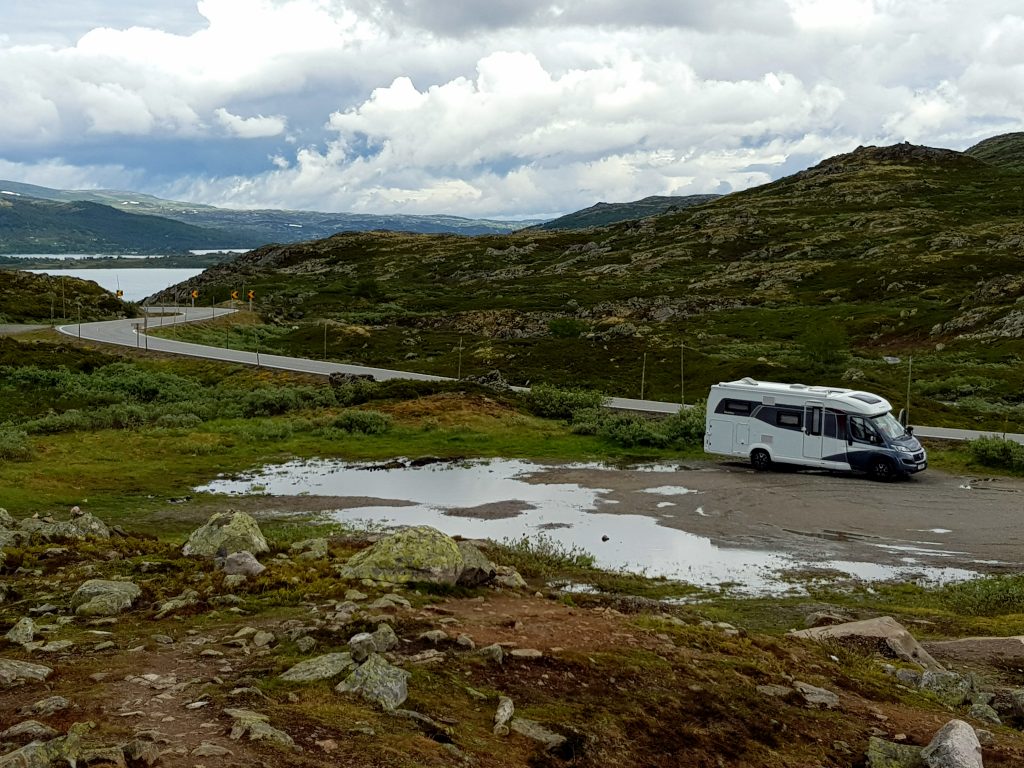 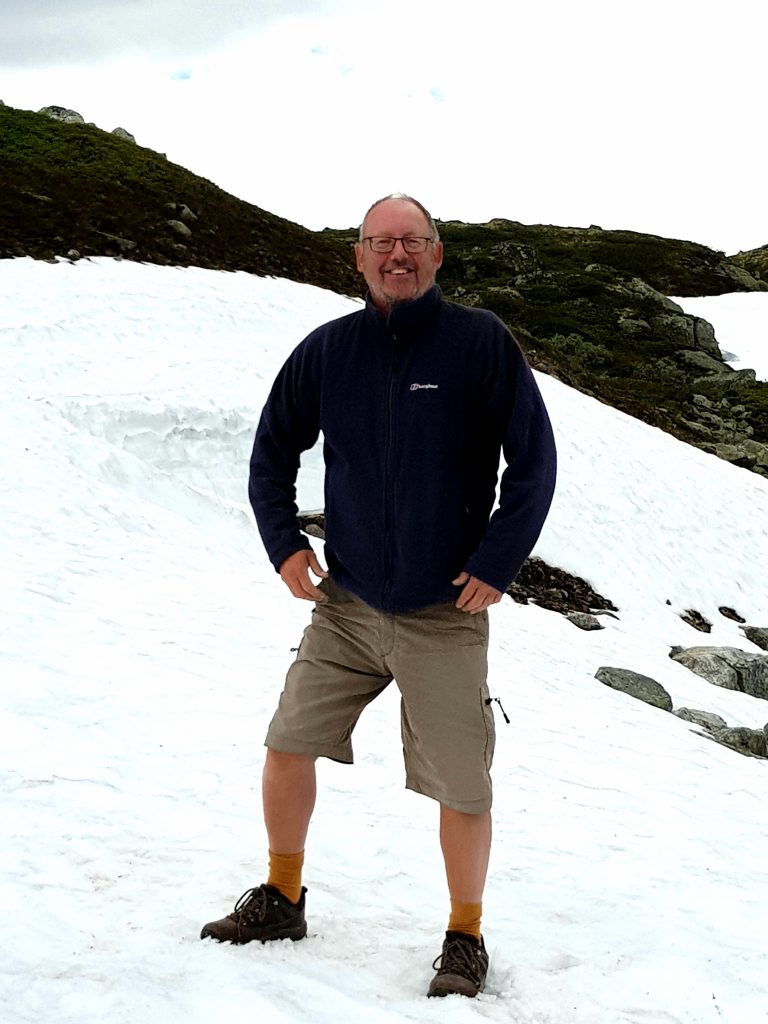 Lots of snow near to where we parked for the night on the Hardanger Plateau. 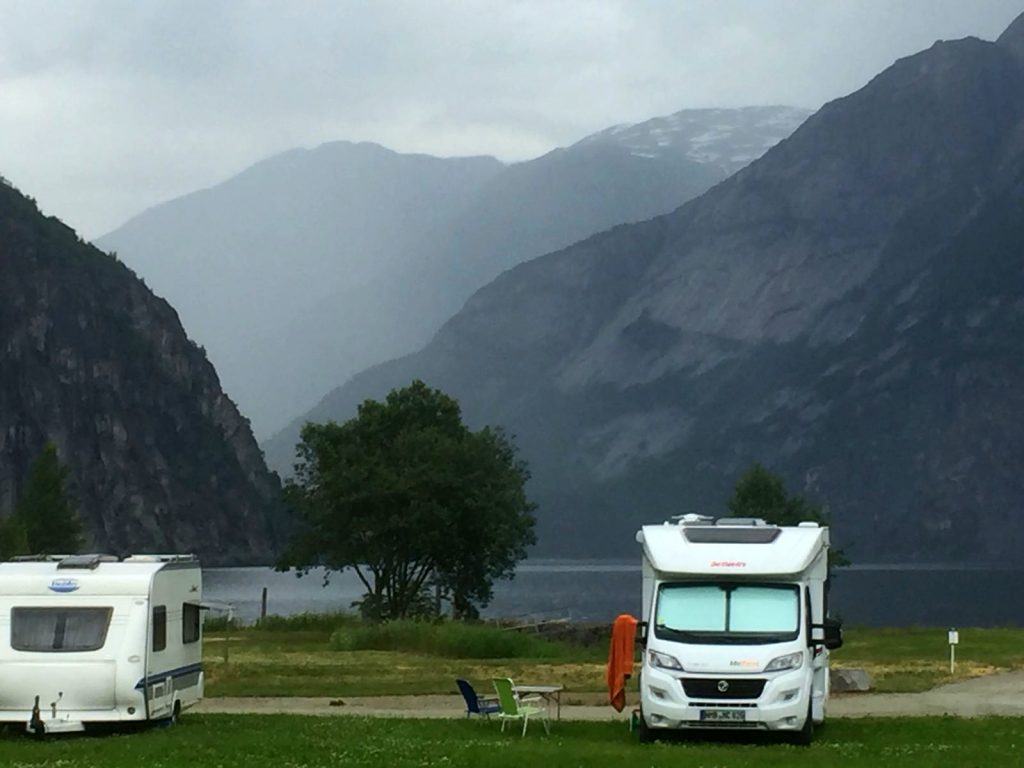 We spent a night at Sæbo Camping on the E7 Tourist Route. 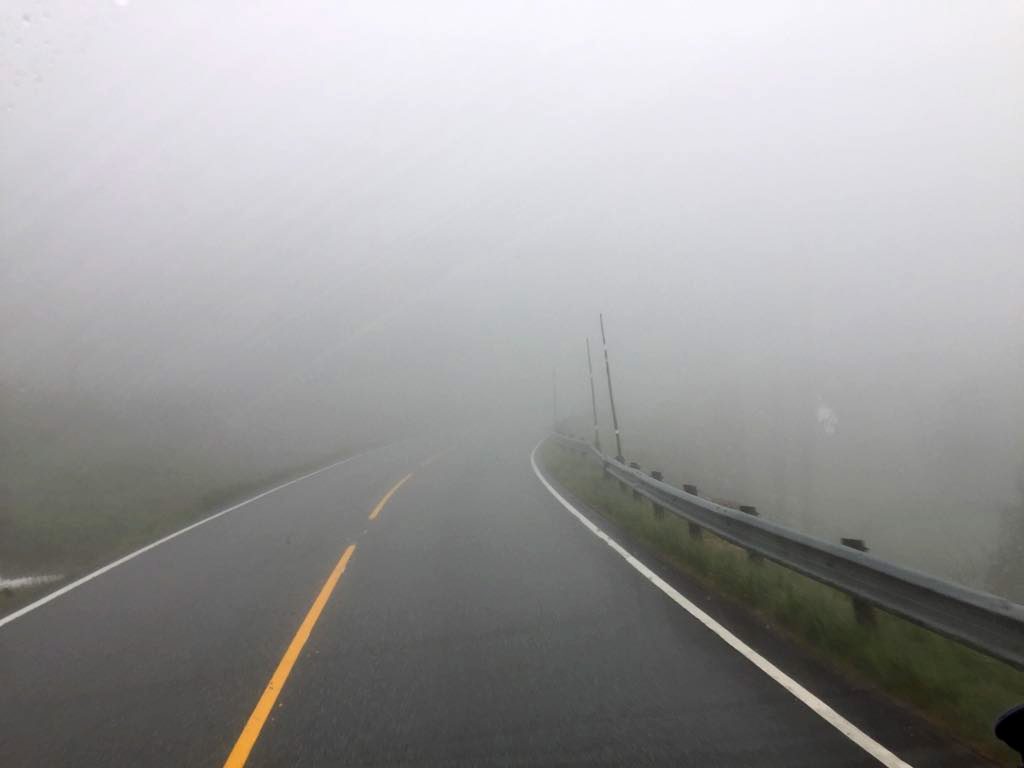 Driving on the Hardanger Plateau at 3,500 ft. Not much of a view at this point due to low cloud! 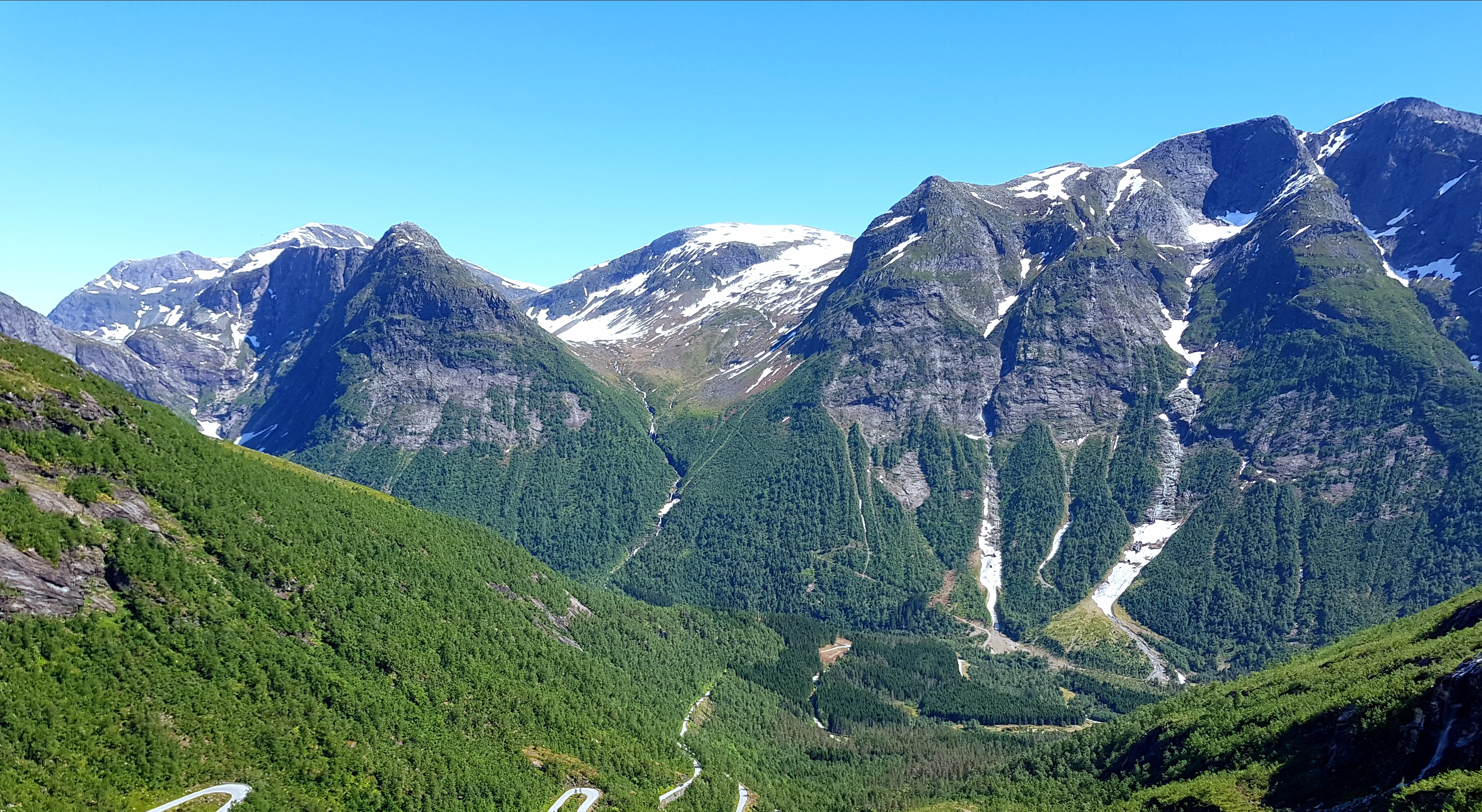