Motorhome insurance and party girl on a baggage carousel.

Once we found somewhere that we were comfortable with we called our motorhome insurance company, Comfort Insurance, to ask whether they would continue to insure the vehicle whilst it was parked up for 6 nights. They came back with the answer that, because we had to leave the vehicle keys with the car park, they would insure the motorhome provided that the vehicle keys were kept in a safe. When I asked the car park about a safe they said that all keys were kept in an office that was occupied 24 hours a day. I called Comfort Insurance again to explain this, and was expecting a negative response, but to my surprise, and after referring the matter to underwriters, they agreed to insure the motorhome for an additional premium.

The car park, Royal Parking, at Alicante airport has 24 hours CCTV, a secure fence and gate as well as staff members on the premises 24 hours a day. As a paranoid motorhome owner I was reasonably happy that our motorhome would be safe as I also have a GPS tracker, additional locks on the rear garage and habitation door a Cat 1 alarm and additional window alarms and good motorhome insurance. There is only so much you can do to secure any home and  determined thieves will always find a way in if they really want to. All you can hope for is to reduce the risk. Our motorhome was safe and sound when we returned!

We flew back to the UK on 15 January, the same day Ryanair introduced their new cabin baggage policy. Unless you buy priority boarding you cannot take a small suitcase on board, only a very small handbag or laptop. Your suitcase will be tagged at the gate and put in the hold with the checked in bags. When I heard about the new Ryanair baggage policy I was sceptical that it would work but I must say that I think it’s a good move. Everyone got off the plane much quicker and the luggage arrived on the baggage carousel within 10 minutes.

Talking of airport baggage carousels, how does a woman end up on one? The answer is because Alicante is the airport all the hen night groups fly into for Benidorm. You can spot them and hear them a mile away. They wear silly hats, sashes and slogans on their t-shirts as well as sing out of tune. The group on our Alicante flight were fairly well behaved but the non stop drinking eventually took its toll at Alicante airport baggage carousel when one of the women threw herself at her suitcase and somehow ended up on it!

The next part of our motorhome journey

After arriving back at Alicante airport we drove an hour south on the motorway to Los Alcazares and spent two nights on a campsite very close to the runway of Murcia airport. The Spanish equivalent of The Red Arrows are based here and everyday they took off over our heads. Luckily this only happened during the day.

Los Alcazares is a coastal spa town on the Mar Menor lagoon, famous for its mud bath treatments. The highlight of our visit was lunch at La Encarnacion, a beach front spa hotel built in 1904 and still maintaining many of its Art Deco features.

Our plan is to follow the Spanish coast south, with deviations inland to Granada, Ronda and Seville, until we reach Portugal. Life in our Motor home is very comfortable and Spain is cheap. Last night we had fillet steak in the campsite restaurant for only 14.95 Euros and it was as good as or better than many English restaurants where the same meal would be twice the price. 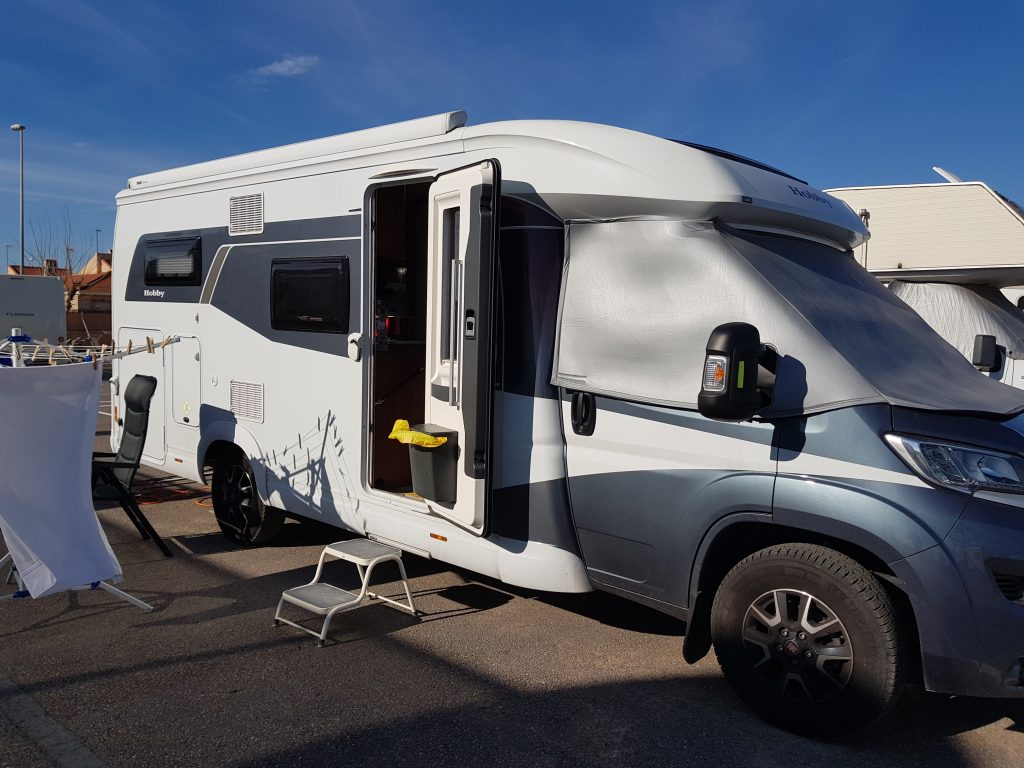 Our motorhome parked at Los Alcazares 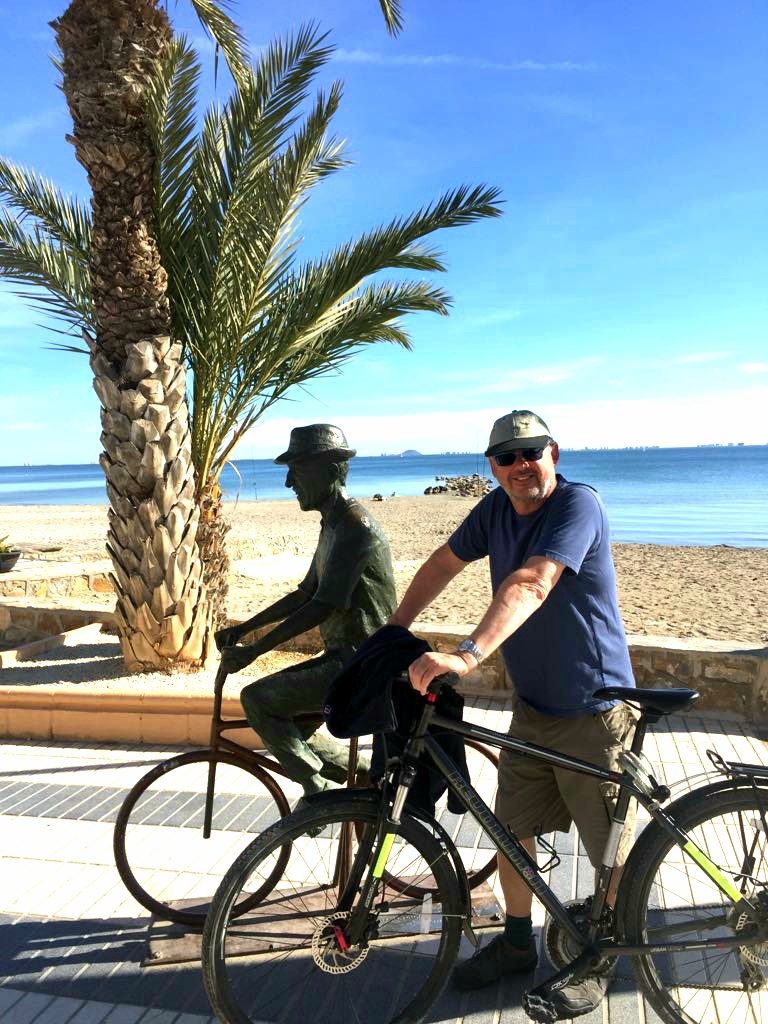 Two old men on a bike – Cycling in Los Alcazares 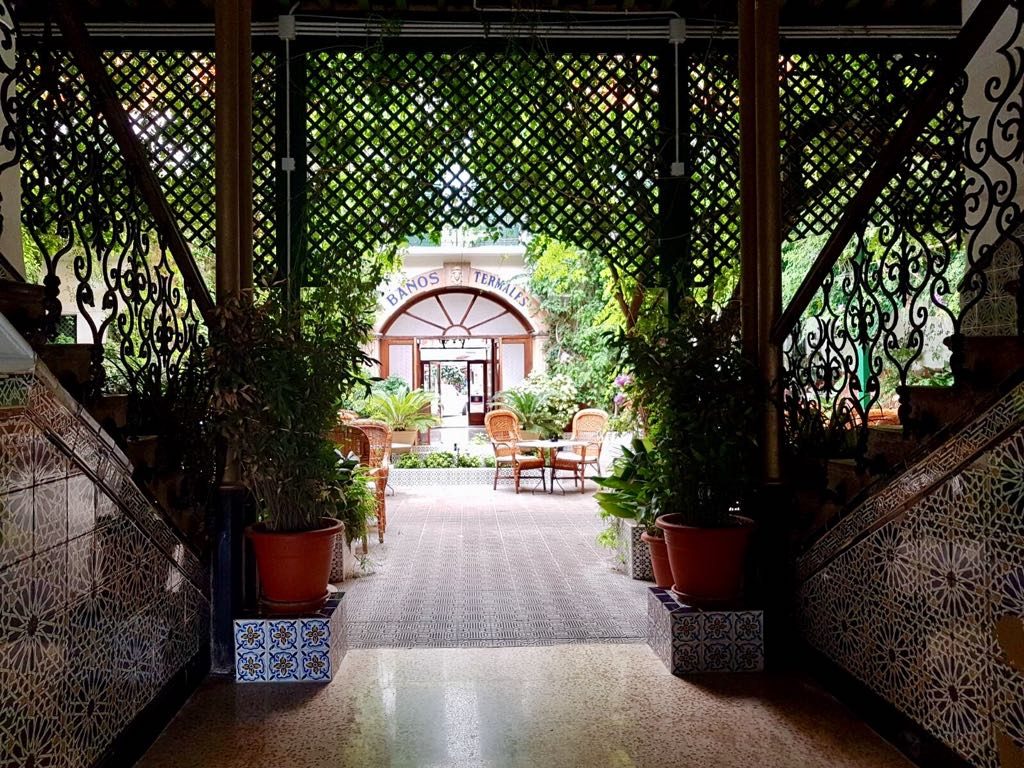