Scotland’s North Coast 500 – To the finish in Inverness.

Scotland’s North Coast 500 is fast becoming a ‘must do’ experience for motorhome owners as well as bikers, drivers using B&B’s as well as anyone else who loves incredible scenery, history and an incredible driving experience. Our journey in our 7.5 metre motorhome has seen us witness beautiful coastlines, deep lochs, isolated communities as well as the full spectrum of weather, from torrential rain to blue sky and sunshine.

In my previous NC500 blog about our journey from Scourie to Kyle of Tongue I mentioned the rugged scenery but as you travel through the villages of Bettyhill and Melvich on the actual north coast of Scotland the scenery quickly changes from rugged peaks to undulating moorland and coastal cliffs. Fields start to appear as the land becomes more fertile. Halfway between Bettyhill and Melvich the road becomes two lanes and you feel like you might soon see civilisation once again!

As well as stunning scenery this area has an infamous history. As we drove through the ruined houses in Bettyhill we were wondering how the village got its strange name. It turns out that Bettyhill is named after the Countess of Sutherland who created the village to accommodate evicted tenants of the Highland clearances to create sheep farms in 1814.

We continued our drive east towards the town of Thurso and the rest of Caithness. It’s on this road that you will see Dounreay nuclear power station, which is being decommissioned. 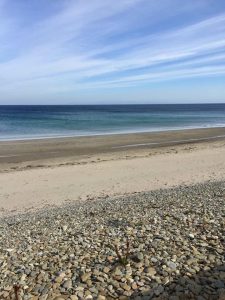 Thurso was an important place in Norse times but we didn’t find much to interest us. The town seemed quite drab to us but maybe that was because it was a grey Sunday. After a quick coffee in a pleasant cafe near the beach we headed off again to Dunnet Bay. There is a good beach here and this is where you will also find the Dunnet Bay Distillery which is well known for its Rock Rose Gin and Holy Grass Vodka. You can also drive out to Dunnet Head, the most northerly point in mainland UK, and here you can see the lighthouse built in 1831 by Robert Stevenson. 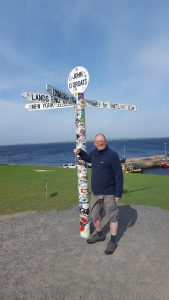 After the obligatory visit to John O Groats, named after a Dutchman named Groot who had a house here in 1488, and a distance of 876 miles from Lands End, we headed south towards Wick.

Wick has a very interesting history and is where my wife’s ancestors once lived. There is even a ruined castle named after one of them! If you ever visit Wick, and are interested in history, then a visit to The Wick Heritage Centre is a must. It was in the early 19th century that Wick rapidly developed into Europe’s largest herring fishing port. At its peak there were over 1,000 ships in the harbour, 16 firms processing the herring into barrels and hundreds of people employed included many women who were responsible for the herring packing. You won’t find any herring boats in the harbour now because greedy over-fishing eventually led to the demise of the herring industry in Wick.

Whist in Wick we stayed at Wick Campsite. It’s a nice site with good sized pitches but the toilet and shower building needs demolishing and rebuilding with something more modern!

The final leg of our Scotland NC500 motorhome adventure took us from Wick to Inverness on the A9. The road follows the spectacular coast road where we stopped a couple of times to admire the views.

We spent, in total,  just over 2 weeks in Scotland and covered about 1,300 miles. We didn’t do as much ‘wild camping’ as we had hoped. As motorhome ‘newbies’ we preferred campsites although these campsites were in amazing locations. The best location we stayed at was Ardmair Point near Ullapool as the views were incredible and we were parked up a few feet from the sea. We met very nice people on the way and we both wore shorts throughout the whole trip!

The Scotland NC500 is a journey we can highly recommend and you won’t find such amazing scenery anywhere else in the UK. driving the Scotland NC500 was fine in a motorhome, although being novice motor homers we didn’t see as many of the tourist attractions as we could have done because parking was often difficult. I would like to see more parking available, especially for motorhomes, at interesting tourist spots.

One final point I would like to mention is about the infamous Scottish midges. They were not as bad as I was expecting. We were only ‘attacked’ by midges once or twice on the whole trip and I only suffered 3 midge bites, but maybe that was because midges don’t like strong winds and rain, of which there was plenty!

Other blogs about the route include Scotland’s Route 66