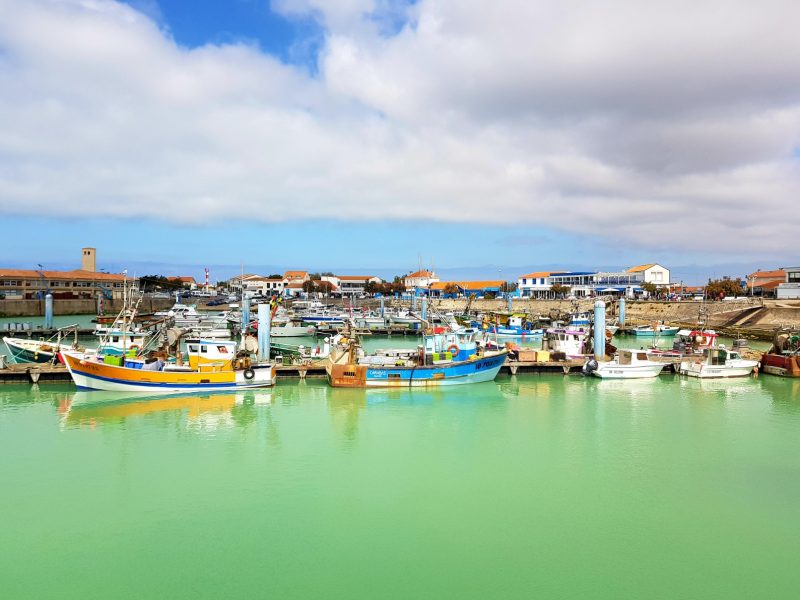 Setting off from Vannes we headed south again on the motorway. ( yes, we do use the toll roads when needed). We were heading for the Île d’Oléron but needed a stopover as I don’t like to drive too far in one day. Looking through our book of the ‘most beautiful villages in France we discovered that Vouvant was only 11km off the motorway and that there is a motorhome aire 400 metres from the village centre. 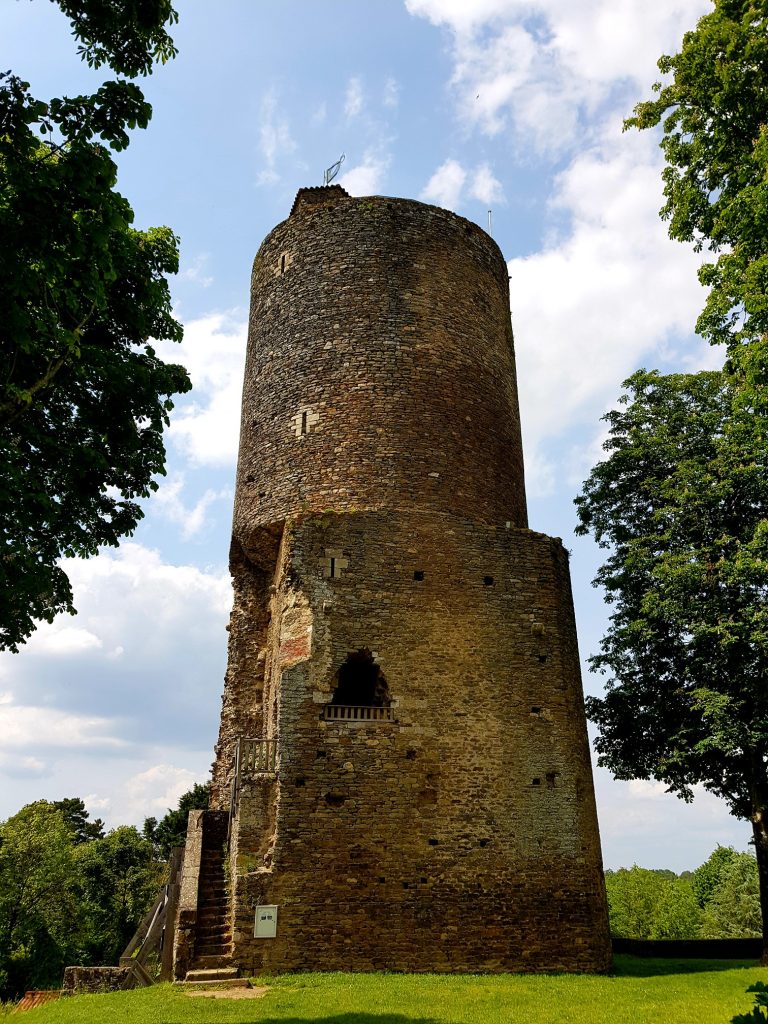 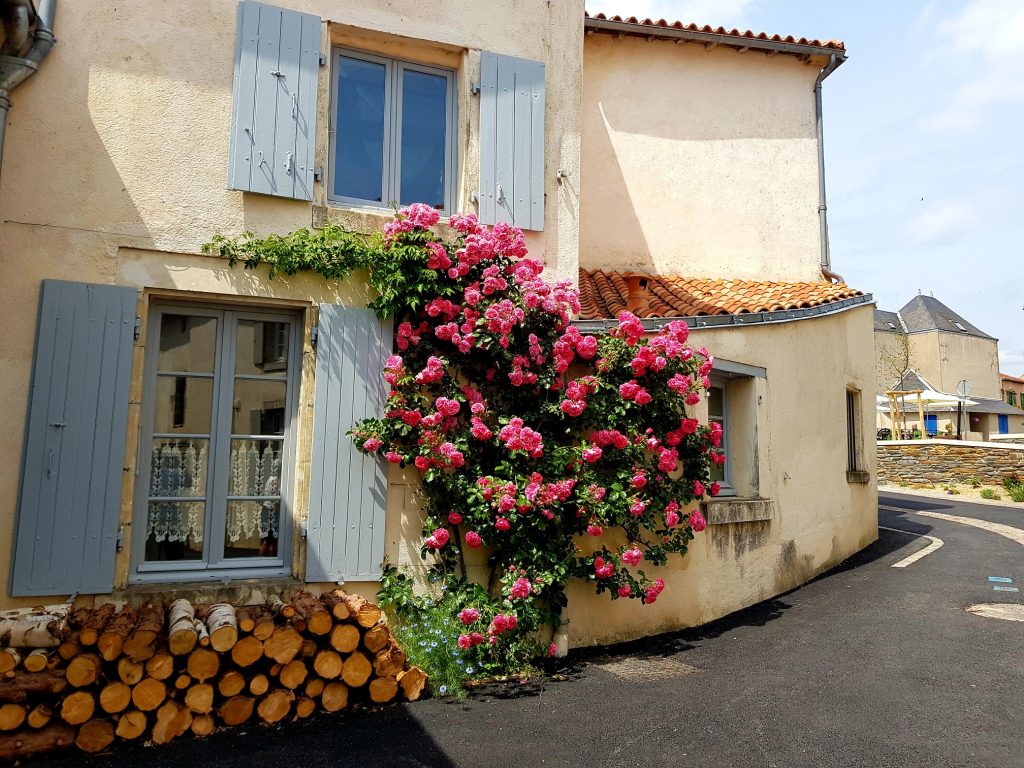 Vouvant is a fortified village and dates back to the 12th century. The keep of the castle is still visible and it looks out over the pretty and immaculately kept village. A stunning mix of colour from the wild flowers including poppies were growing around the ramparts of the village and fluttering in the sunshine. 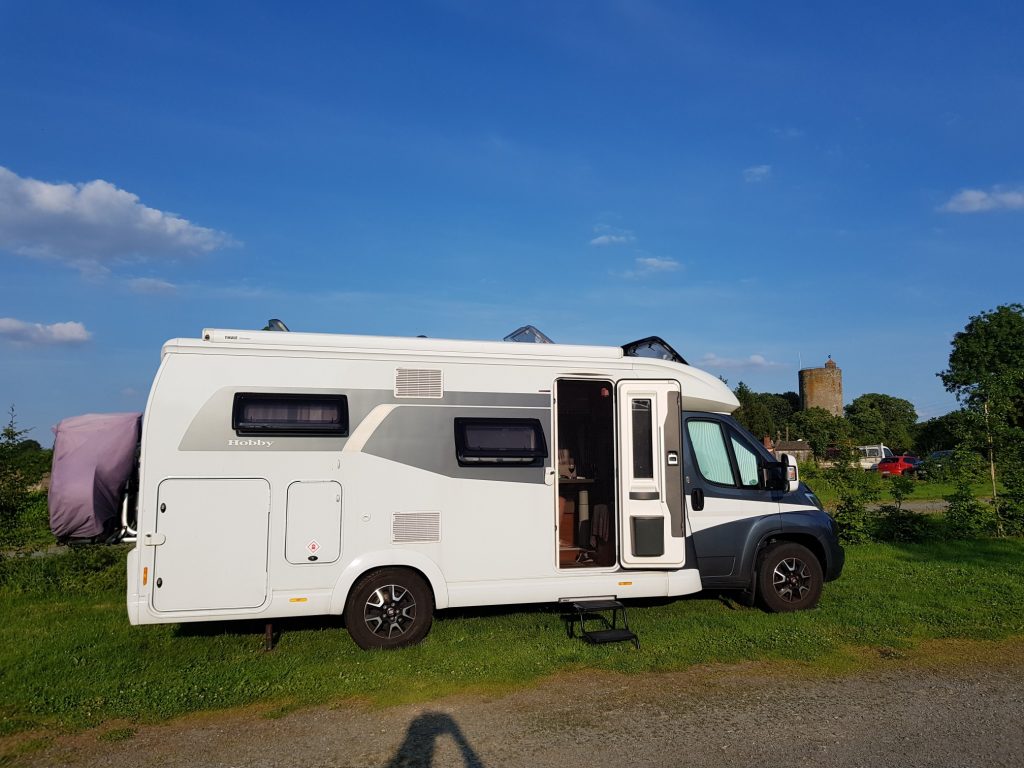 We were the only motorhome in the motorhome parking area, even though there is space for about 40. It cost us €5 for the night, a bargain considering the cheapest B&B in the village costs about €49 a night and our view was unbeatable looking out towards the medieval castle keep, the fields and….the cemetery! On the morning we were leaving Vouvant a small white van pulled up next to us. It was the local farmer selling fresh eggs. €2.50 for a dozen eggs and they were excellent. Payment for staying the night is made at the village boulangerie or a man in a van turns up at 9am to collect the €5.

Our next destination was the Île d’Oléron about 2 hours drive away. Driving a motorhome in France is far easier than driving one in the UK. The roads are straight, with few potholes and apart from around cities are generally free of much traffic. We encountered lots of empty roads which were a pleasure to drive on.

Motorhoming on the Île d’Oléron 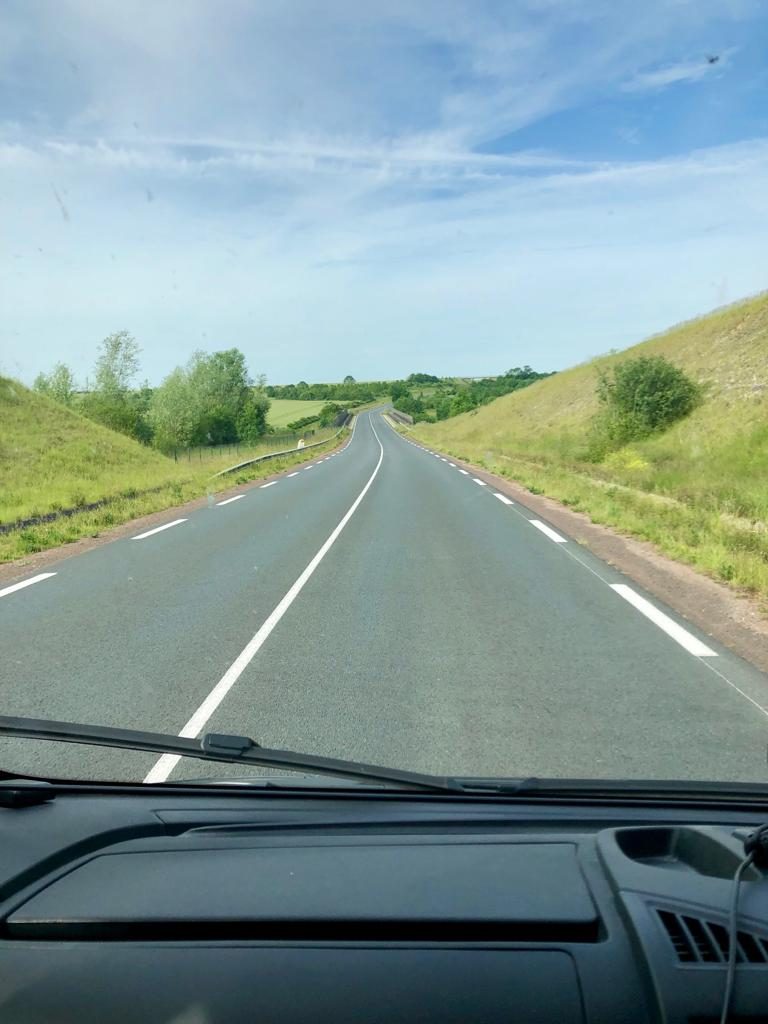 The spectacular bridge from the mainland to the Île d’Oléron is free. The island itself is 19 miles long with a population of over 21,000 and is criss-crossed with canals and cycle paths. 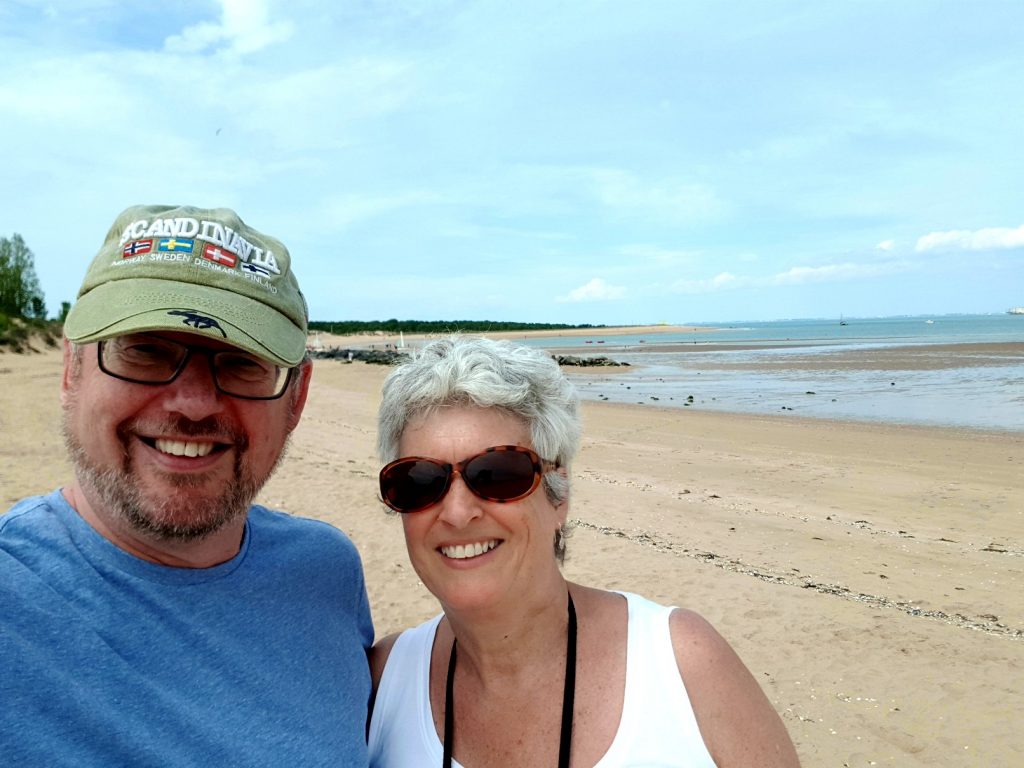 On the beach at Boyardville

Our first stop was on the north coast at Boyardville, a pretty village on the river estuary but with a good number of restaurants shops and bars that presumably cater for the owners of the many boats in the marina. We stayed at the Aire de camping-car Fort Royer a lovely spacious place to park a motorhome, for only €10 a night including an electric hook-up. 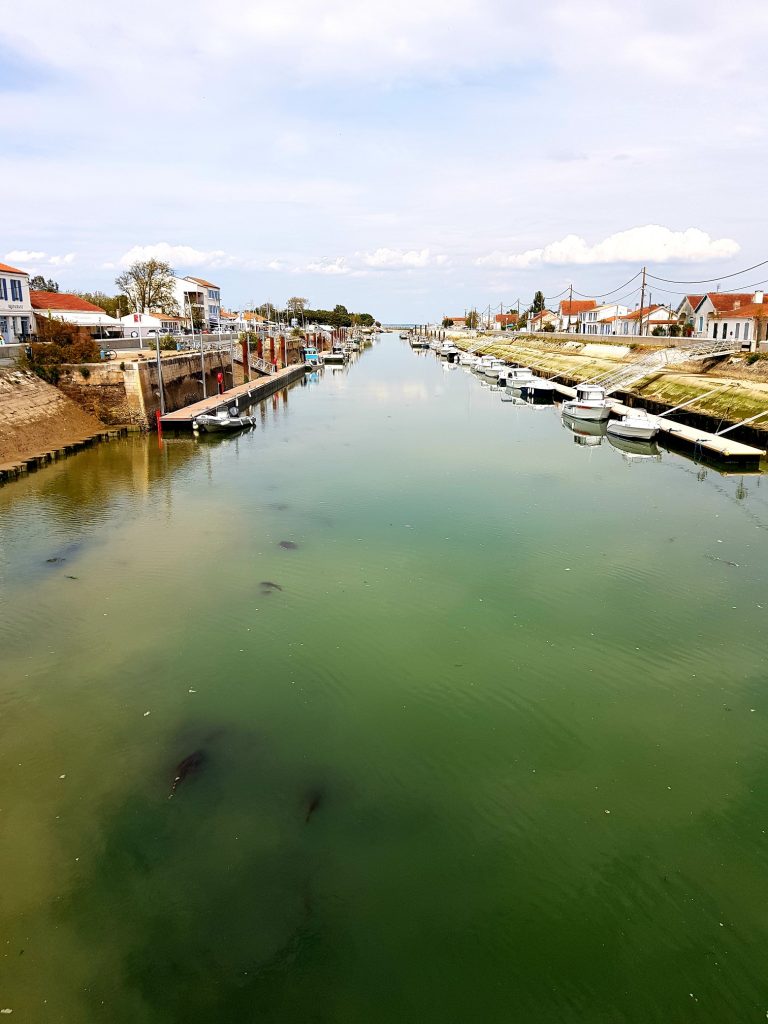 After one night in Boyardville we drove only a few miles to a huge leclerc supermarket at Saint-Pierre d’Oléron. It was one of those French supermarkets that sells virtually everything. We stocked up on beer and wine with some food thrown in there too!

Having never visited Île d’Oléron before we weren’t too sure where the best places to visit were, so after some research we decided our next destination on the Île d’Oléron would be La Cotinière, one of the largest fishing ports in France.

Using the ACSI app I found what looked like a good campsite and sure enough Camping Le Sous Bois turned out to be fantastic and a haven of peace and tranquility. The campsite pitches were flat and a good size and the facilities were clean and plentiful. The washing machines also meant we could do some much needed washing. €18 a night using an ACSI card. 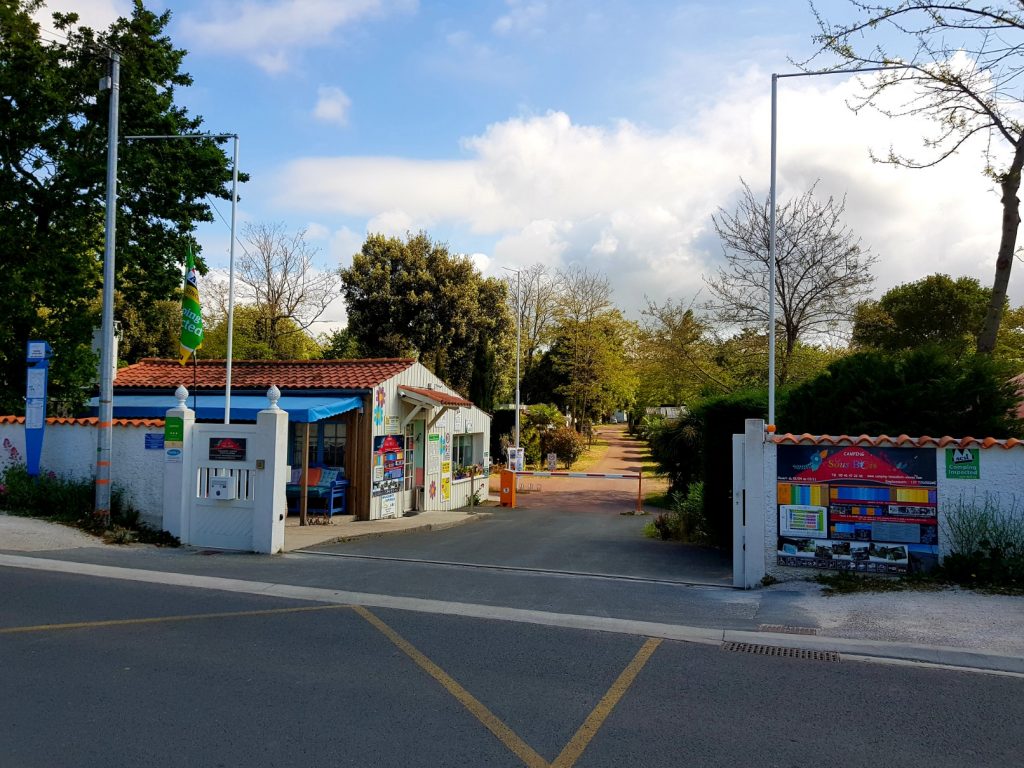 The fishing port of La Cotinière

La Cotinière itself is a lovely fishing port. We watched several fishing boats arrive and unload their catch and we strolled through the town admiring the many restored and well looked after houses. We ate a lunch of moules & frites overlooking the harbour with the sun blazing down. 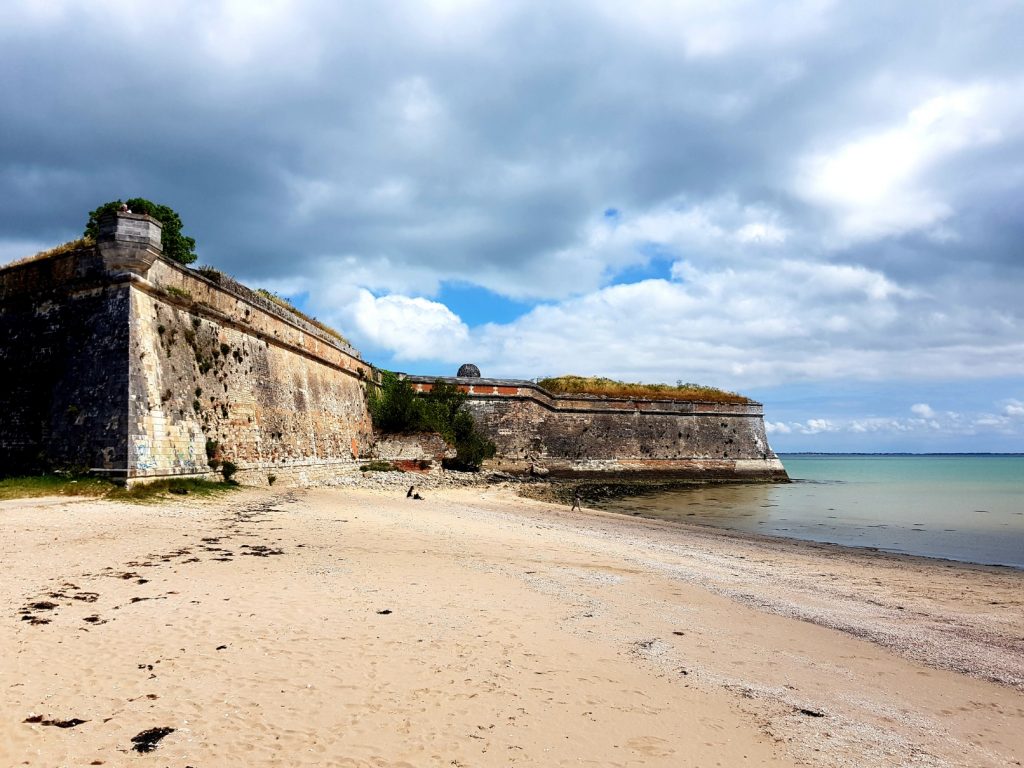 Le Château-d’Oléron itself is the 2nd largest town on the island and is famous for its oyster port and its citadel. It’s also well known for its Sunday market so it was good luck rather than good planning that we arrived on a Sunday and were able to browse the many colourful stalls. We walked on the walls of the fortress that started construction in 1630 and it’s an impressive structure with fantastic views out to the mainland. 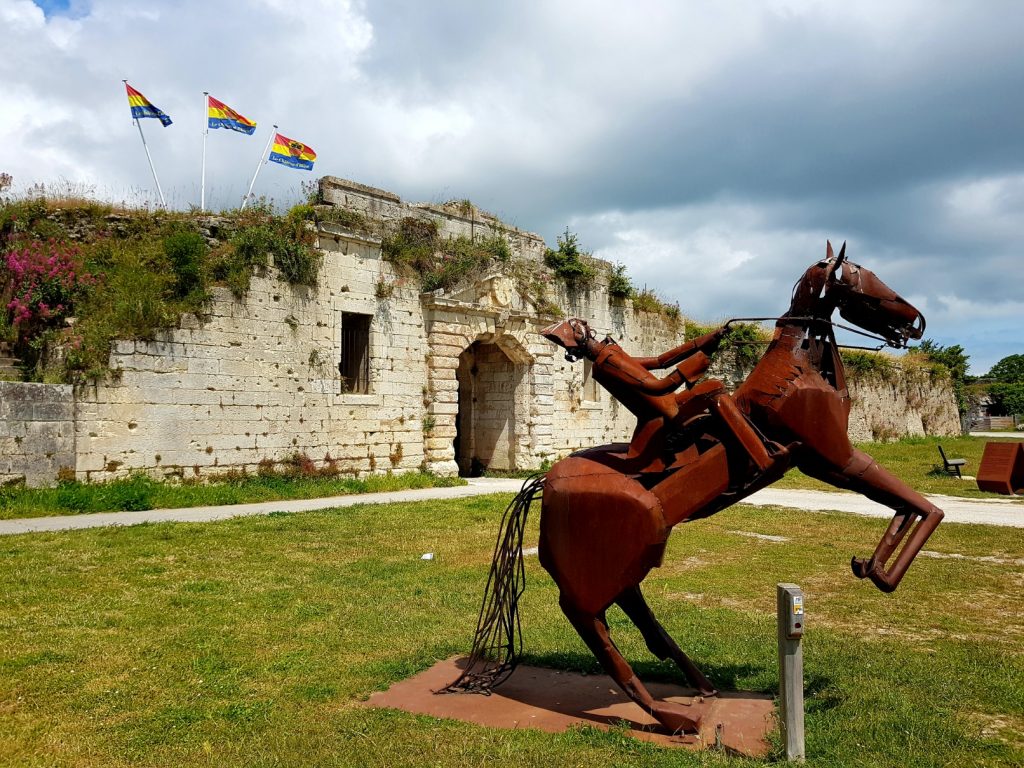 Artwork in the fortress at Le Château d’Oléron 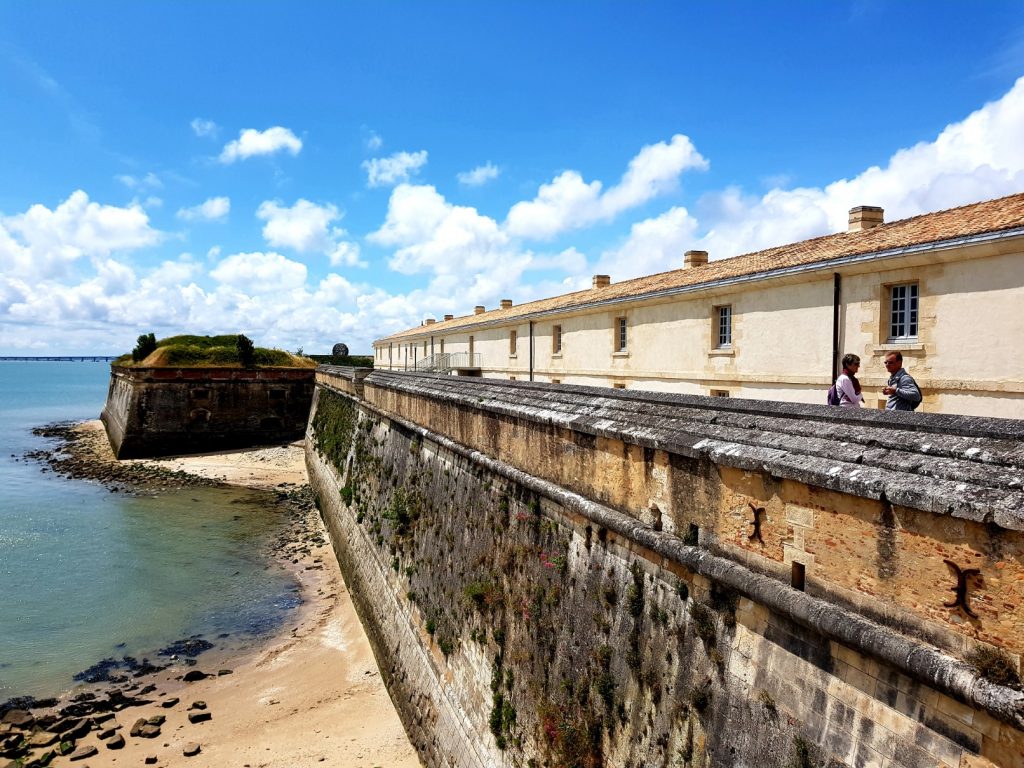 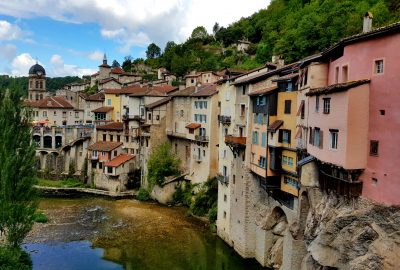