Sweden in our motorhome

Over the Öresund Bridge to Malmö and Stockholm

The Öresund Bridge connects Copenhagen in Denmark to Malmö in Sweden. The bridge is an incredible feat of engineering and this morning we drove on the bridge in our motorhome, after leaving the wonderful city of Copenhagen. 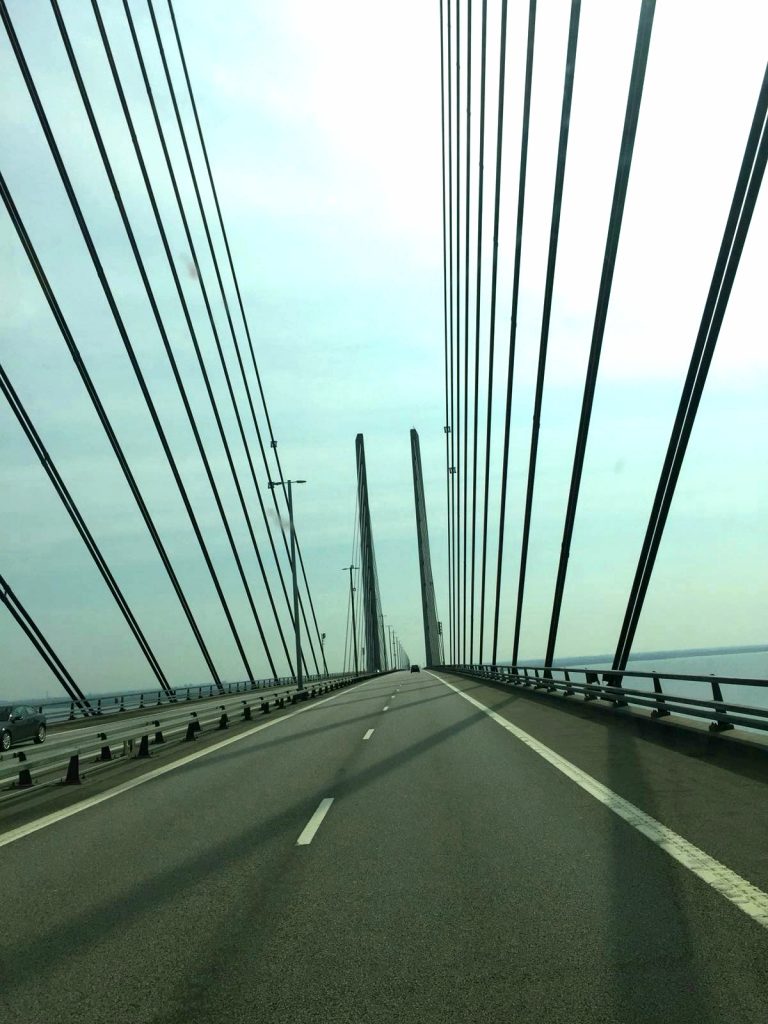 The bridge is a combination of a tunnel, an artificial island and a bridge with a total length of 18km. The Öresund Bridge itself is over 5 miles long and is the longest connected road and rail bridge in Europe. At its highest point the road is 57 metres above the sea.

Our motorhome is just over 7 metres long so it falls into a higher toll category and a higher cost. The cost to travel across the Öresund  Bridge for our motorhome was 100 Euro, making the trip an expensive one!

Visiting Malmö with our motorhome

The Swedish city of Malmö has family connections so we wanted to stop the night and spend a day in the city. We found a peaceful place to park for the night at the marina (£16) and had fantastic views across the sea to Copenhagen. The number 7 bus runs every 10 minutes to the centre of Malmö. We had been told that you can only pay with a credit card and not cash but when we presented a card to the bus driver he said his machine didn’t work and we could ride for free! 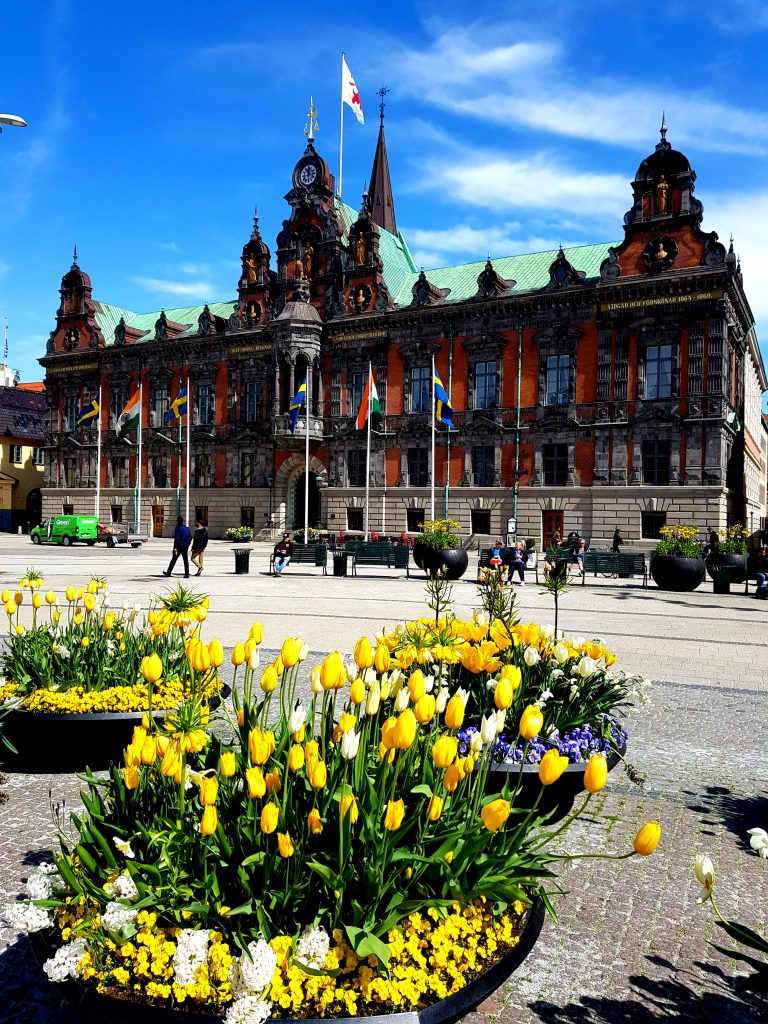 Malmö is Sweden’s third largest city, although the city originally belonged to Denmark until 1658. Apparently, over 100 languages are spoken in Malmö and Thai food is just as popular as meatballs! We found Malmö to be a charming cosmopolitan city with historical buildings and fascinating architecture. Malmö is also home to Scandinavia’s tallest building the Turning Torso.

Waking to blue sky and after emptying our waste and putting water in our fresh water tank we set off north on the E6 and E4 to drive the 612km to Stockholm. Not wanting to drive for 7 hours we stopped  halfway at a lovely free overnight spot on the shores of Sweden’s  Lake Vattern. It’s always a good feeling when we find a free place to park up for the night. We found the place on the Camper Contact app. which I think is fantastic and well worth the £4.99 cost. We had a walk down to the waters edge, beautiful scenery with traditional red painted wooden houses along the shore. We had a stunning sunset and all this for free.

Next day we set off again to complete the remaining journey to Stockholm. The E4 motorway to Stockholm winds its way through lots of dense forests and past crystal clear lakes. There are plenty of picnic places and service areas on the way. The picnic stops are often next to a lake and they have toilets and information boards making them a great place to stop for lunch. They are perfect for motorhomes because we can just turn the gas on and boil a kettle or get something out of the fridge for lunch.

Visiting Stockholm with our motorhome

Stockholm, of course, is Sweden’s capital city with a population of about 1.3 million. It’s known as the Venice of the North because it is built over 14 islands and water dominates the landscape. We arrived at Bredangs camping, which we had picked out as a good place to stay, and it turned out to be a good choice. It’s a 10 minute walk to the nearest T-Bana metro station and cost 44 Swedish Krona (£3.70) to get to Stockholm centre. We got off the metro at Gamla Stan, which is the old town of Stockholm and walked to the waterfront to buy a ticket for the Hop On/Hop Off boat trip. At a cost of 220 Swedish Krona (£18.50) it was well worth the money. 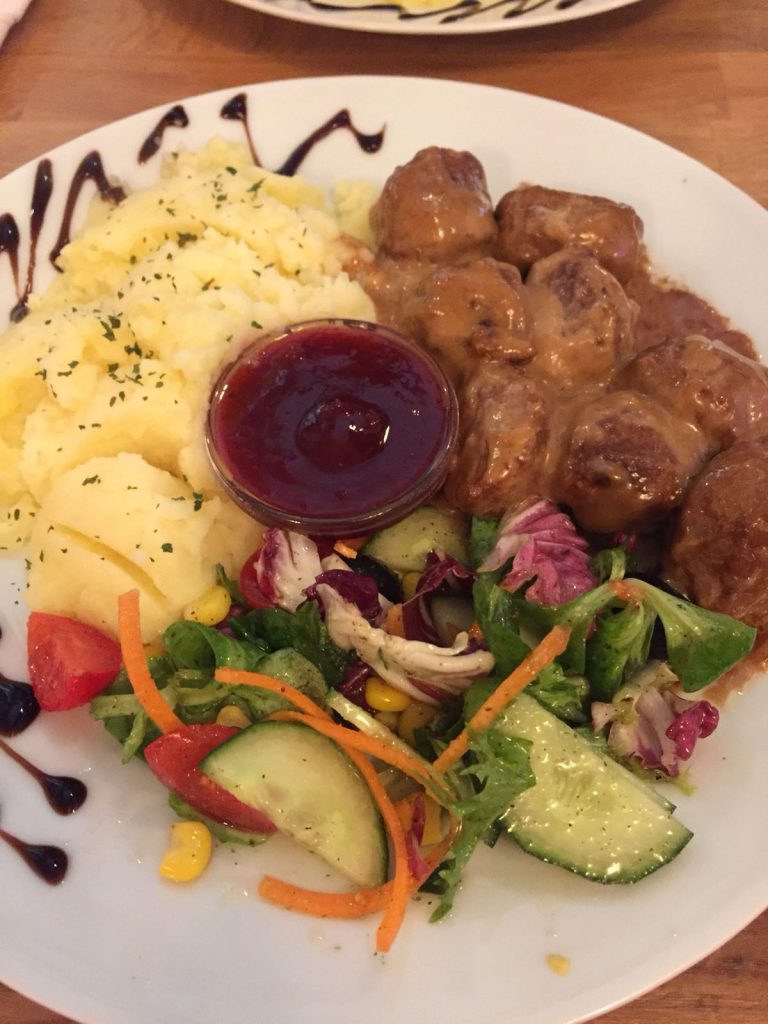 Meatballs for lunch in Stockholm

After our boat trip we decided to see if we could find somewhere for lunch and we found a nice restaurant in the old town, which turned out to be Russian, but the meatballs were good, as was the price at a very reasonable £11 person including drinks. Our impression of Stockholm being reasonably priced was shattered, however, when we later had a coffee and a piece of cake each and the bill came to £22 which for a Yorkshireman was hard to tolerate. No prices were visible in the cafe and I should have known better! It’s a good job we will have plenty of free overnight stops, for which Sweden and Norway are well known for, to make up for the exorbitant prices in Stockholm. 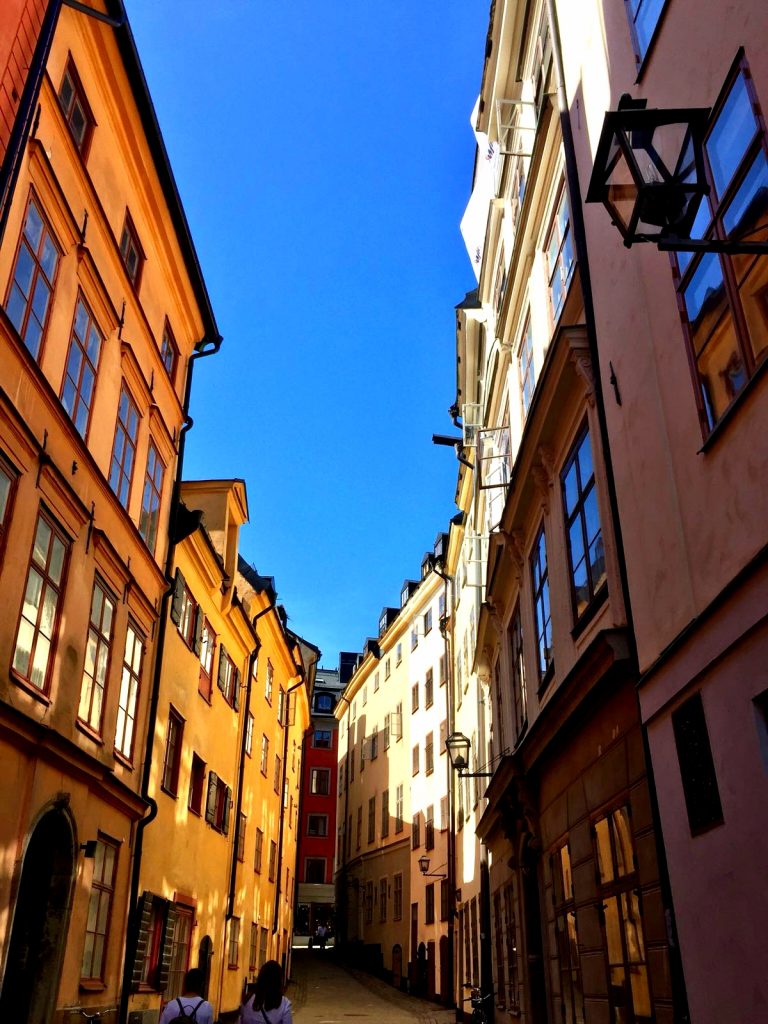 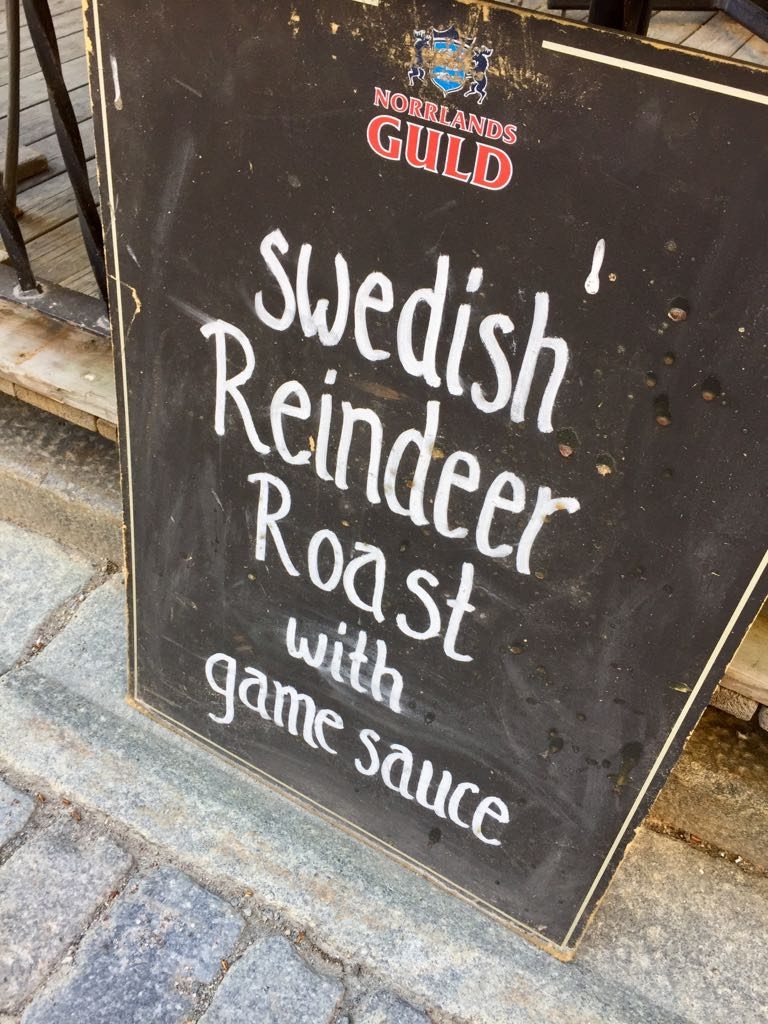 Despite the high prices, we really enjoyed our visit to Stockholm and the warm sunny weather was a bonus. Stockholmers were making the most of the good weather and were sunbathing and walking in the many green spaces and along the waterfront where there are lots of boats and plenty of people watching to be done. 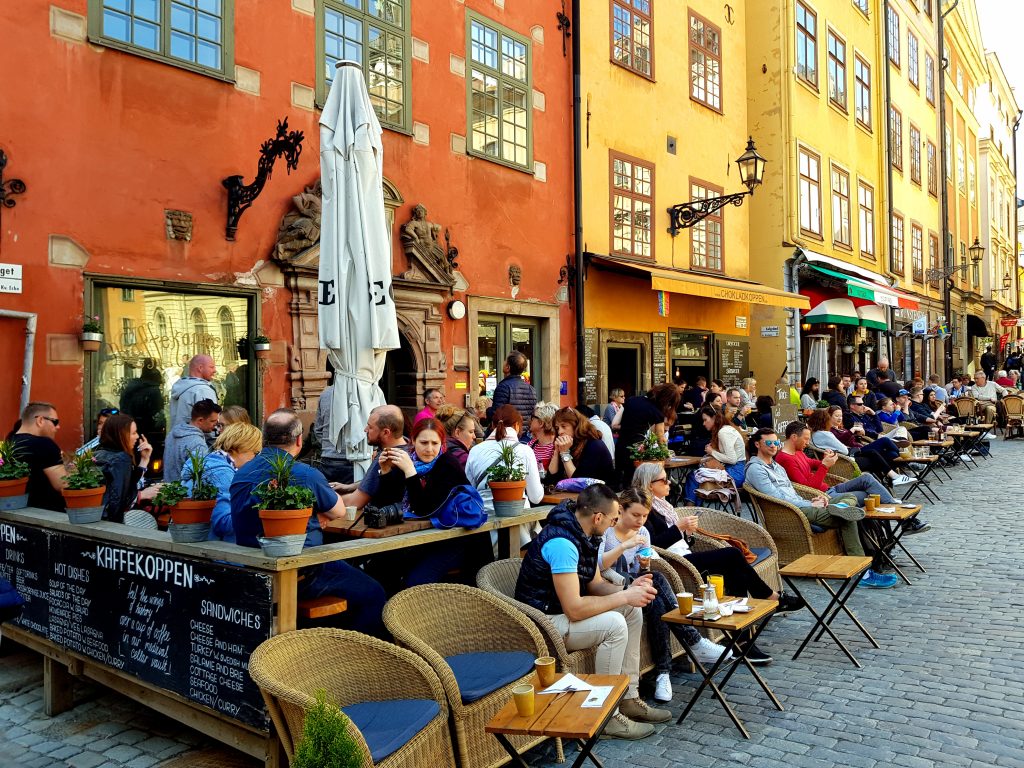 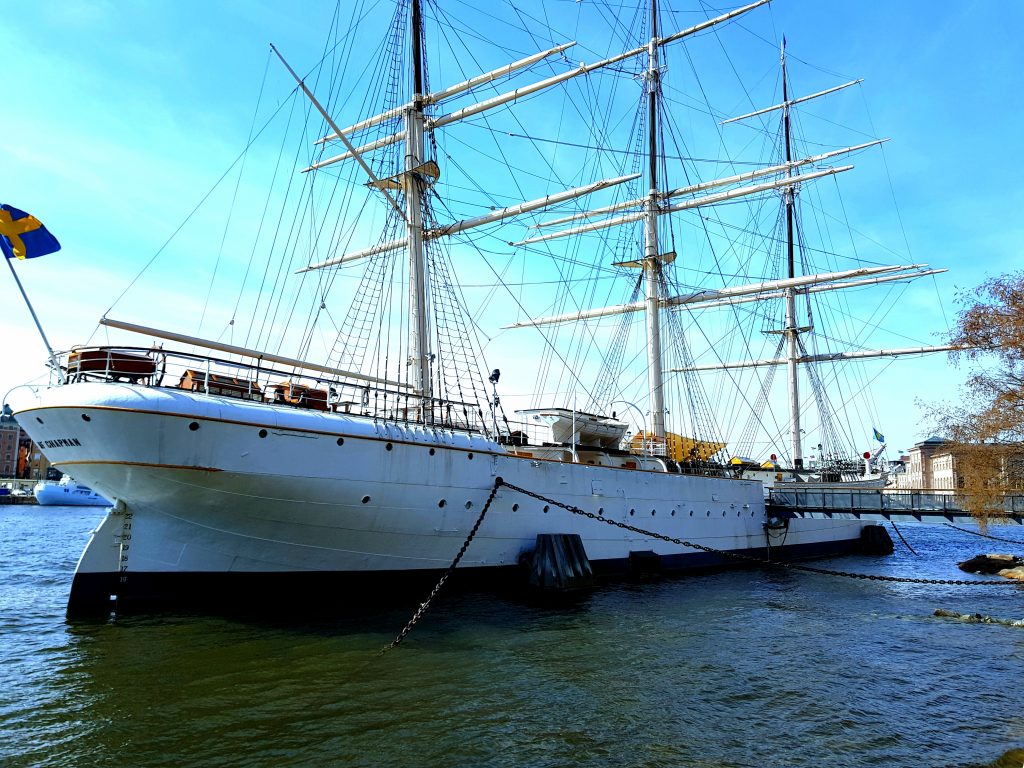 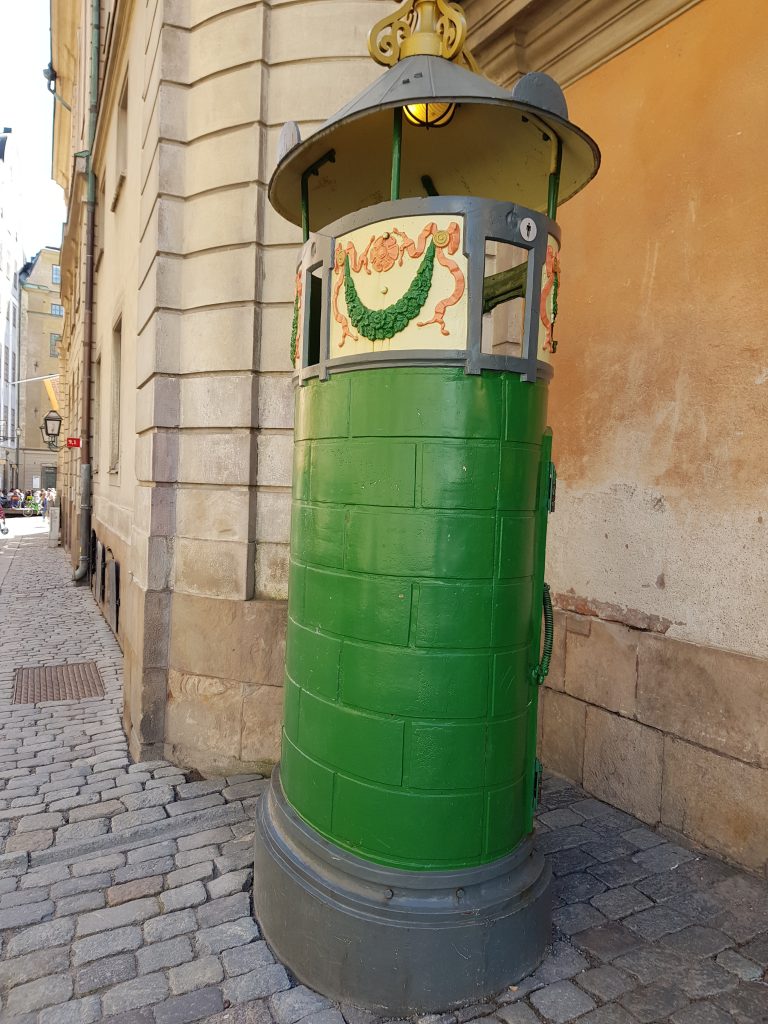 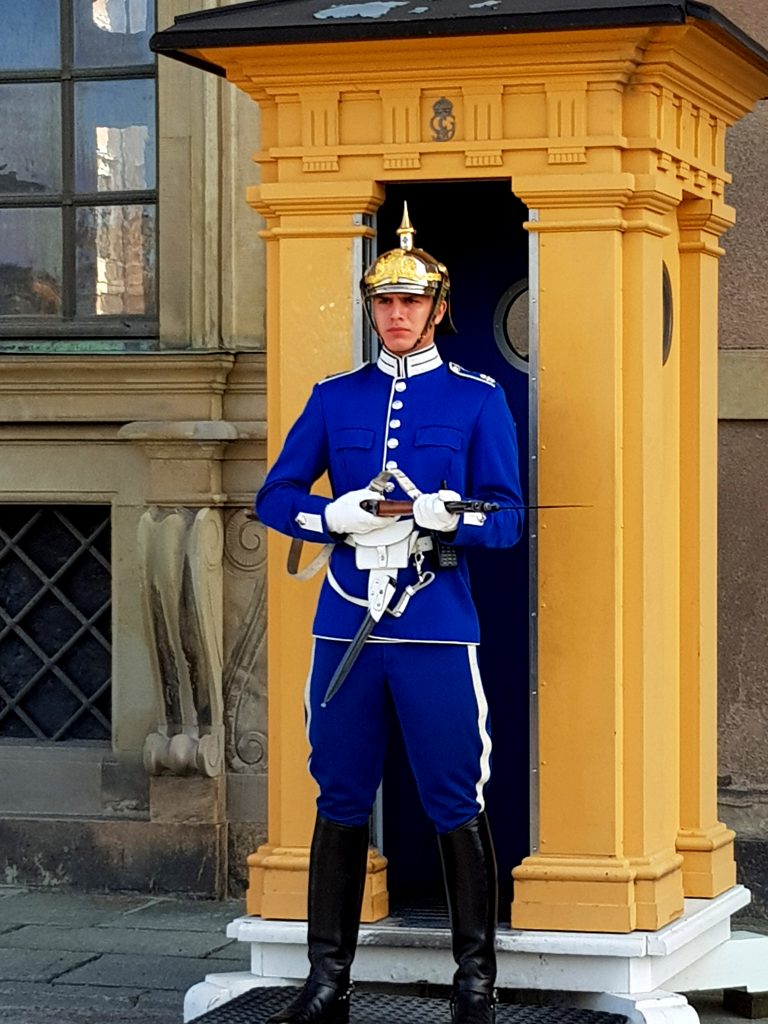 Guard outside the Royal Palace in Stockholm