Sweden in our motorhome

Driving from Sweden to Norway on the E14

The E14 runs from Sundsvall on the coast of Sweden to Trondheim on the west coast of Norway, a total of 448km and we have just driven along this incredible road in our motorhome.

We are on a motorhome trip and visiting Denmark, Sweden and Norway. As we drove west from Sundsvall we made several stops to take in the breathtaking beauty of the landscape around us. We passed huge lakes, several of which were still frozen after a long very cold winter. The ice must have been very thick because the temperature was a warm 20c although the rivers were flooded as the ice was melting. 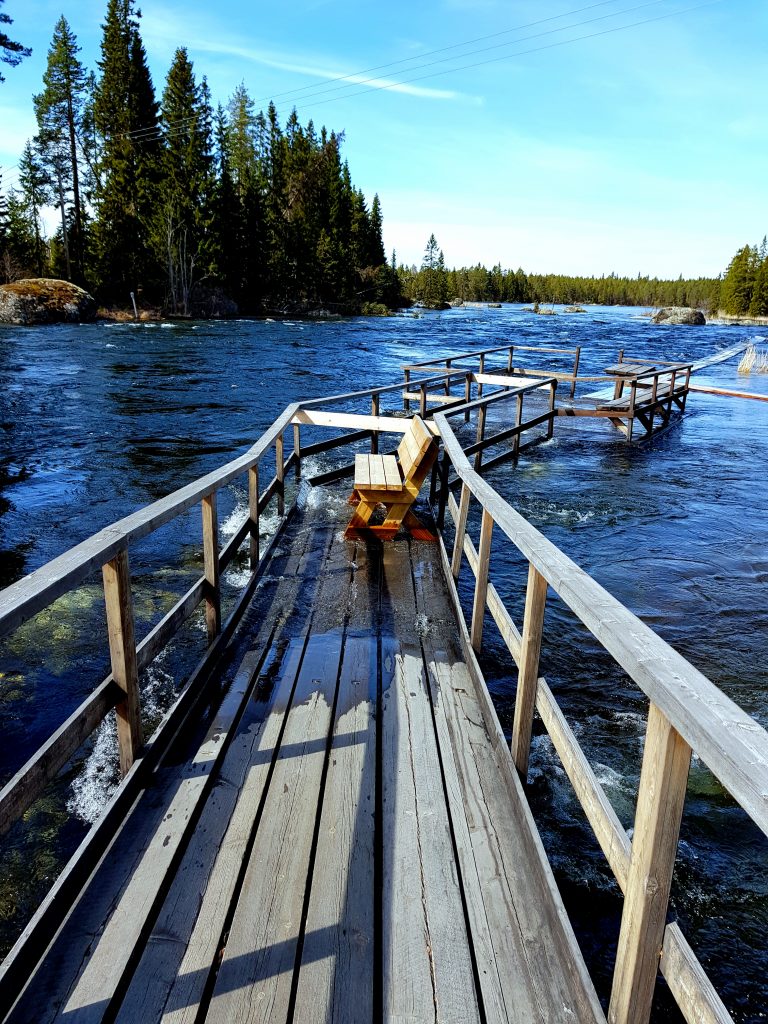 Flooded river due to melting snow just off the E14 in Sweden.

The Swedish rest stops are excellent on the E14. They have toilets, picnic tables, beautiful views and many have motorhome waste emptying points. 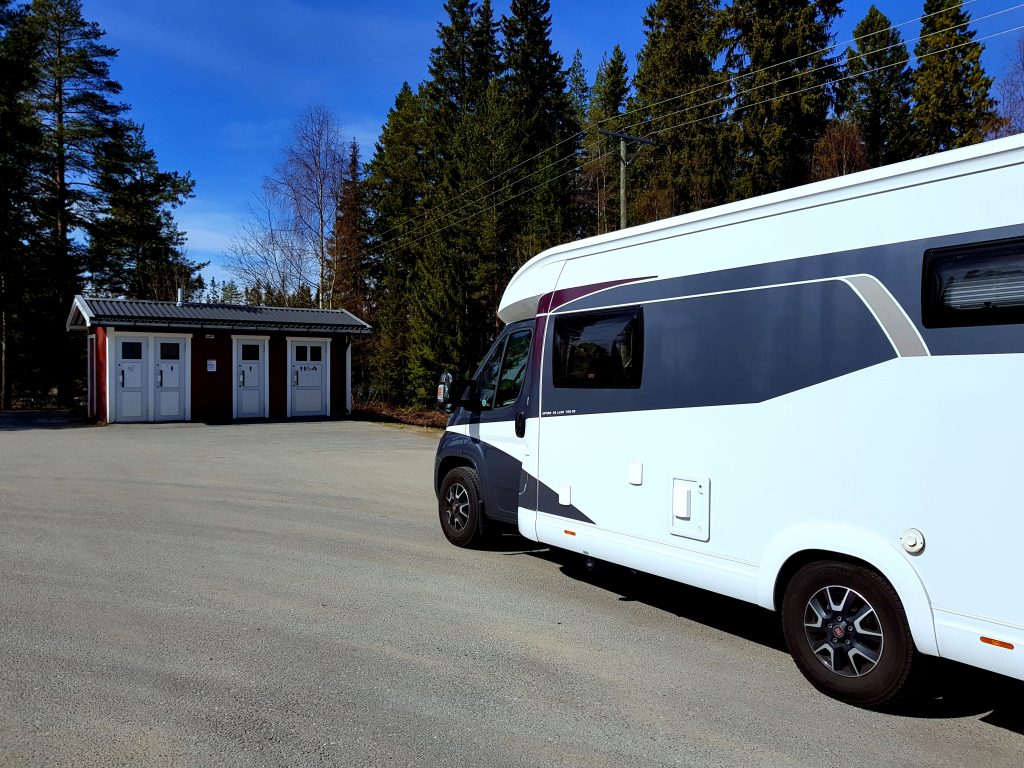 Our motorhome parked near to the facilities on the E14 in Sweden.

There are also several reststops where you can park a motorhome and stay overnight for free, although you may have to put up with road noise from passing traffic on the E14.

The E14 road was very quiet when we drove it in May. At times it seemed like it was just our motorhome on the road and we had all the wonderful scenery to ourselves, and then a huge lorry would appear carrying logs, destined to be turned no doubt into Ikea furniture!

Ristafallet – Campsite with our own huge waterfall

Rather than spend a free night on the E14 we decided to head for a campsite about a mile from the main road and this turned out to be a good call as we ended up staying two nights at Ristafallet Camping. With only 30 pitches we were parked up next to one of Sweden’s most picturesque waterfalls. The Ristafallet waterfall is 50 metres wide, 14 metres high and it was in full flow as the winter snow melted. It is an awesome sight. The owner of the campsite told us that there had been nearly 2 metres of snow on the ground only 2 weeks ago but now we were bathed in wonderful warm sunshine, which we hadn’t expected so far north.

We decided to have a rest day at Ristafallet as the weather was a warm and sunny 23c. We did walk along the nearby nature trial along the side of the raging river and waterfall to take more photos but apart from that we got our deckchairs out and relaxed. This part of Sweden could be Alaska or Canada. We even saw logs floating down the river and over the waterfall which was a fascinating sight. 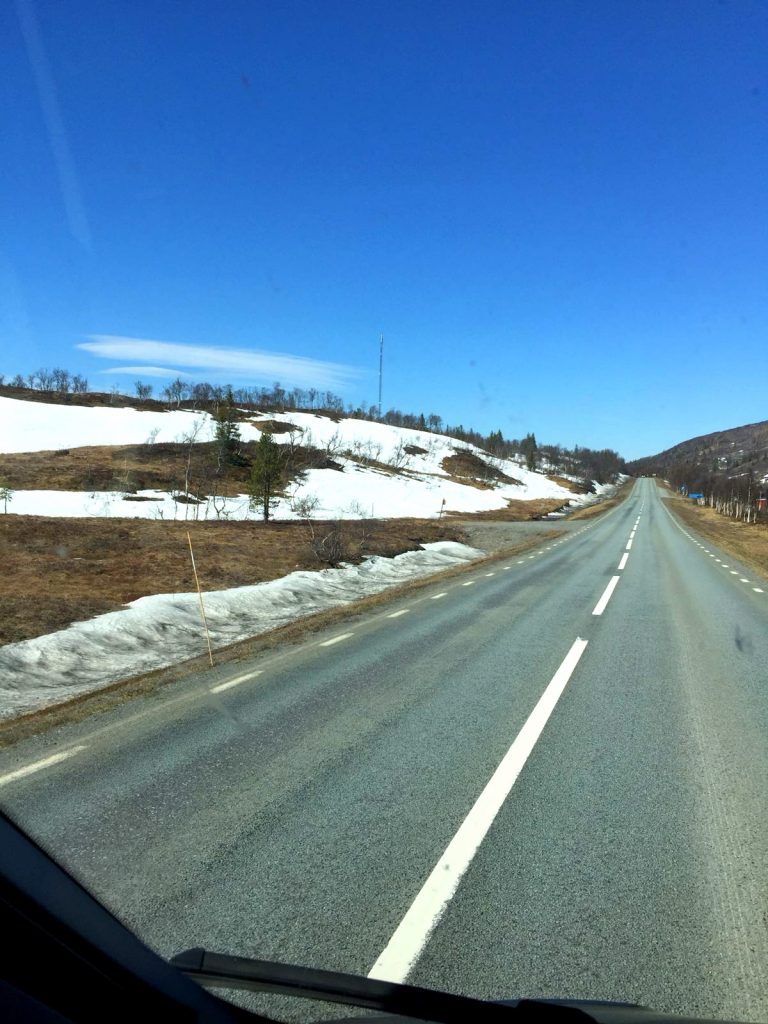 Driving the E14 in our motorhome.

After two nights listening to noise of a huge waterfall at Ristafallet we set off again west on the spectacular E14. The scenery became more dramatic as we got nearer the Norwegian border. Huge forests as far as the eye can see, frozen lakes, raging white water rivers and snow capped mountains for over 100 miles. There are warning signs for elkes and several ski resorts including Åre where the last remaining snow was melting in the 23c heat.

A few miles from the Norwegian border we stopped at the Euro Cash Swedish supermarket and stocked up on some fresh food. The supermarket was in the middle of nowhere and the store was full of Norwegians who had driven across the border to take advantage of cheaper prices.

The Swedish/ Norwegian border was not what I expected. We didn’t need to stop and there was nobody there to check passports so we were left with a 60 mile drive to Trondheim.

The E14 eventually meets Trondheimsfjorden and then through a series of very long tunnels, the longest of which was 3.7km, reaches Norway’s 3rd largest city, Trondheim. 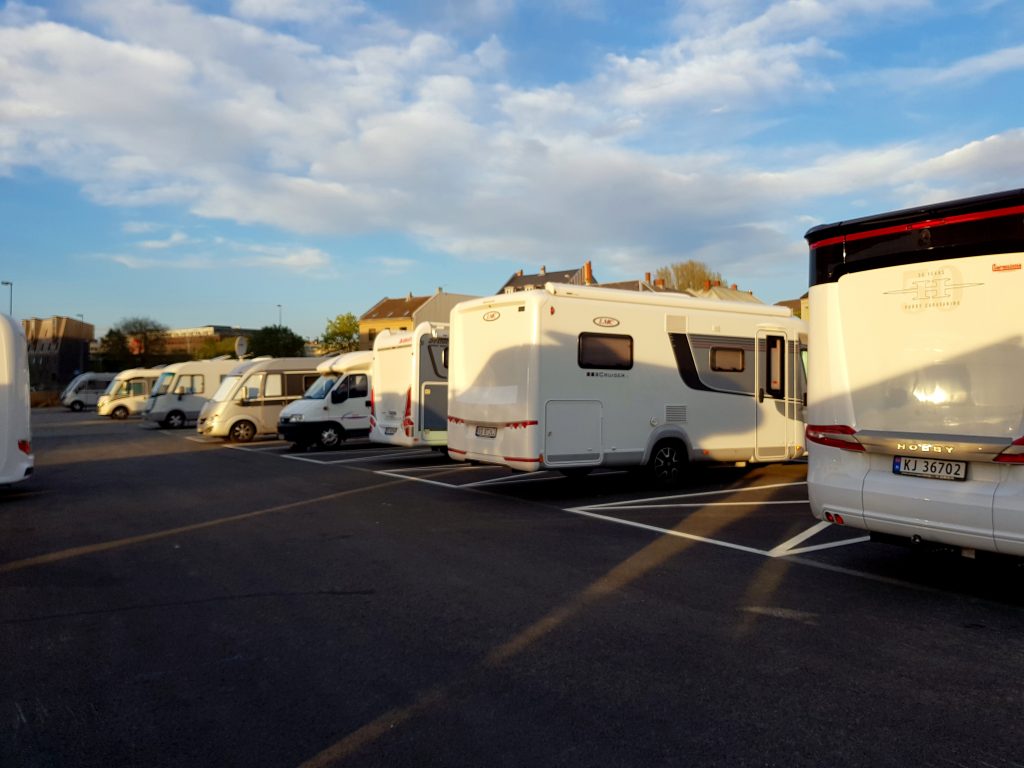 About 40 Norwegian motorhomes at Trondheim and us!

There is a motorhome parking area at Nyhavna with room for 50 motorhomes. It was busy but there were a few spaces left. We paid the overnight cost of 250 NOK (£25) at the machine and walked into Trondheim. Trondheim is a university city with 30,000 students and most seemed to be missing lectures to sunbathe or drink in the many waterfront bars. Trondheim was once the capital of Norway during the Viking age. 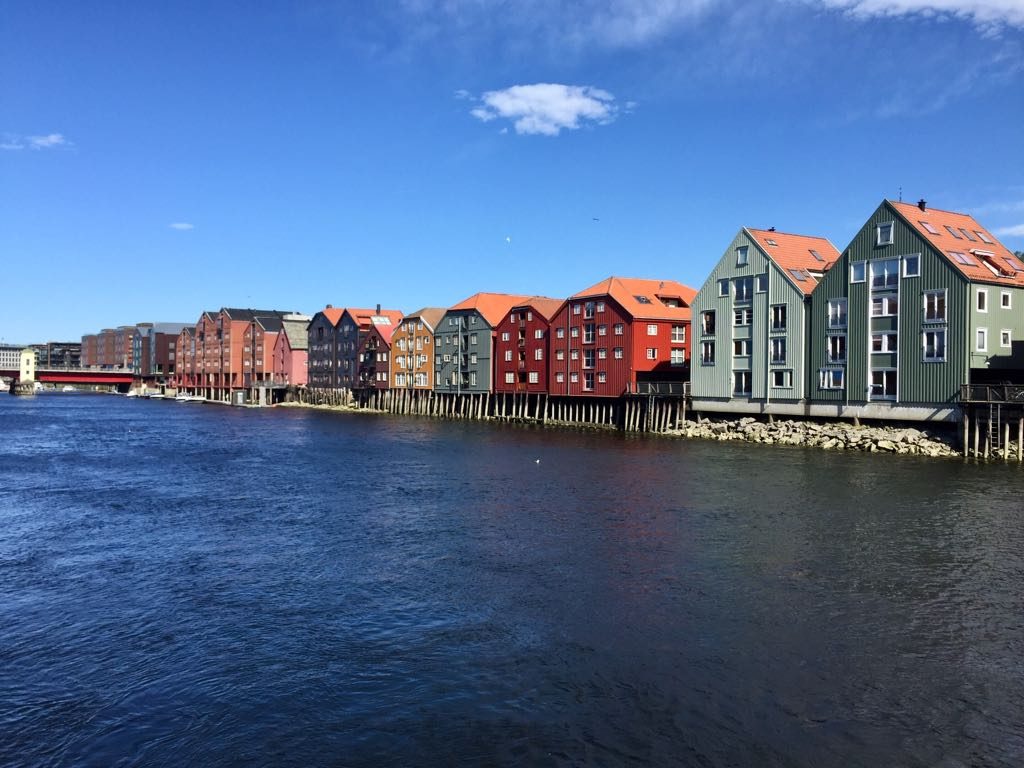 After walking around Trondheim in hot weather I said that I needed a beer and it just so happened that we were standing outside a bar. I ordered 2 large beers at a cost of £12.75, about what I expected!

Speed cameras on the E14

There are lots of speed cameras on the E14 in Sweden. There is little warning to slow down and the speed cameras are not easy to see. Speed limits can suddenly reduce from 100km an hour to 70km an hour.

Toll roads in Sweden and Norway

Sweden has no tolls on its motorways. We drove hundreds of miles on good roads without having to pay.

Norway, however, has toll roads and toll tunnels. There are no manned toll booths but a system of cameras is used called AutoPass. I read before driving in Norway that foreign vehicles might not get charged but I didn’t want to take the risk so I registered with Euro Parking Collection (EDC), the official toll collection agency for foreign vehicles, and they will send me an invoice within 3 months. 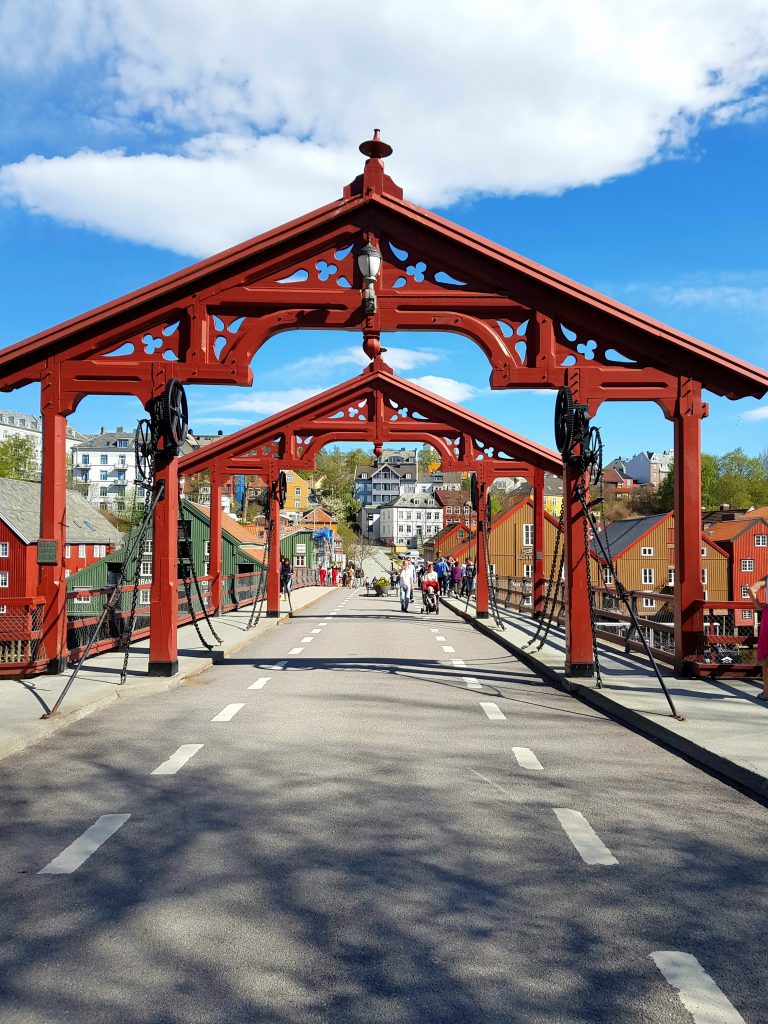 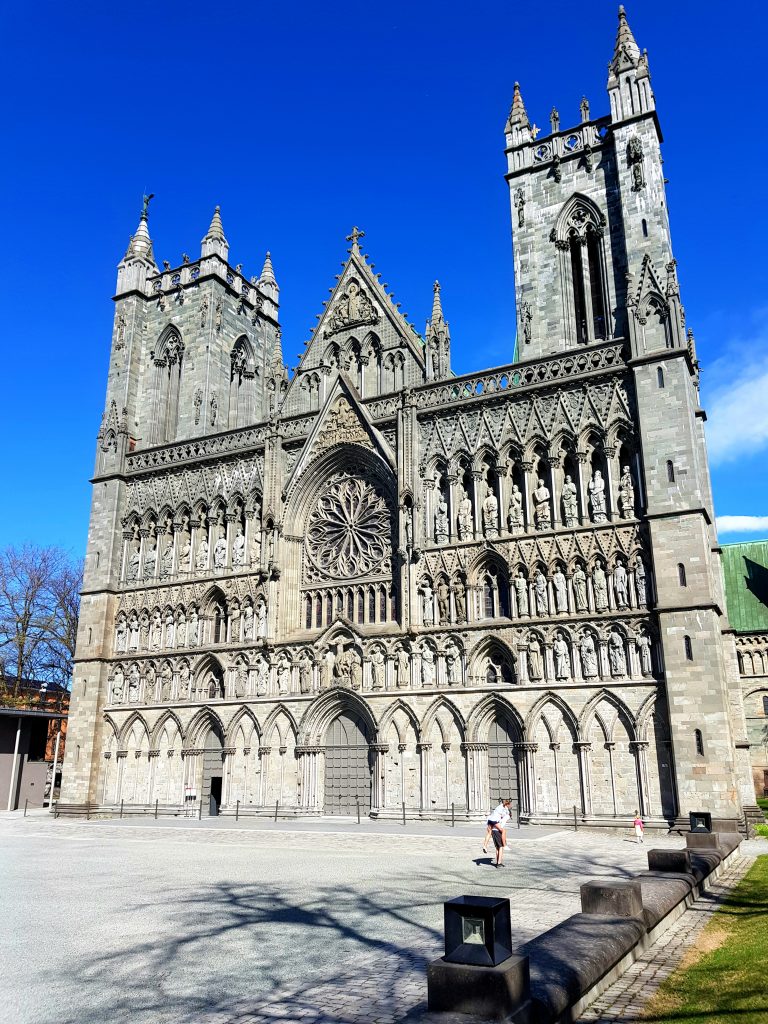 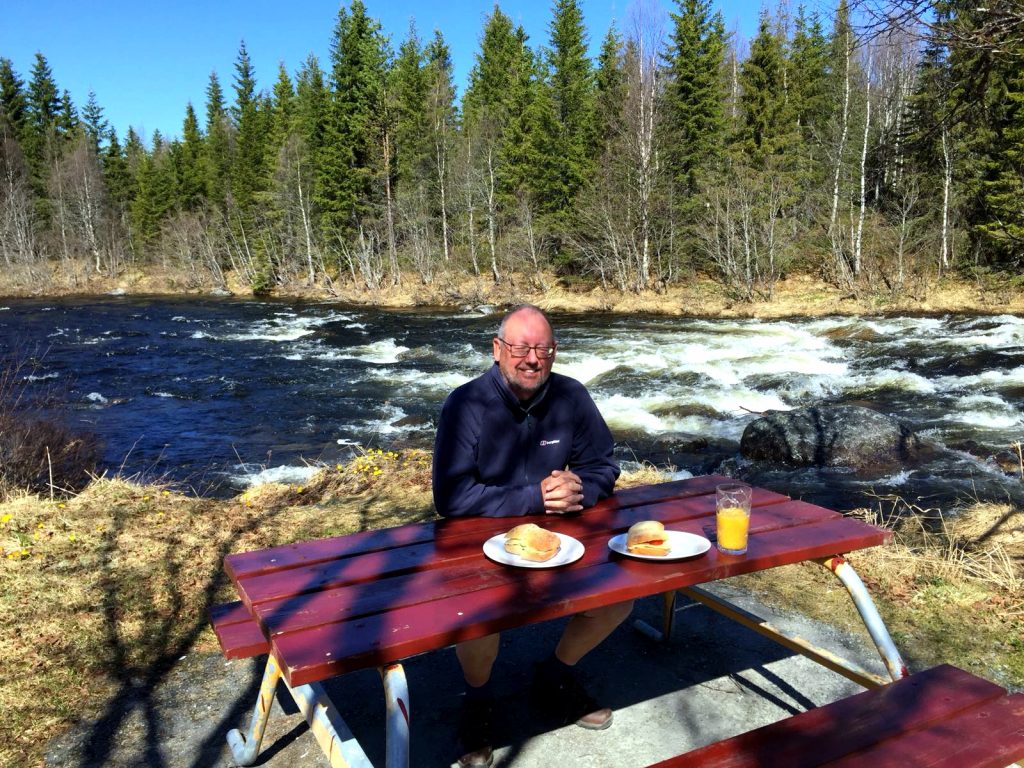 First stop in Norway on E14 is a great picnic spot.