Cáceres might not be a town you have heard of but it should be on your bucket list because it has one of the best preserved Medieval old towns in Europe. Three hours drive from Madrid and in the beautiful Extramadura region of central Spain Cáceres is one of several Roman and Mediaeval towns in this area. 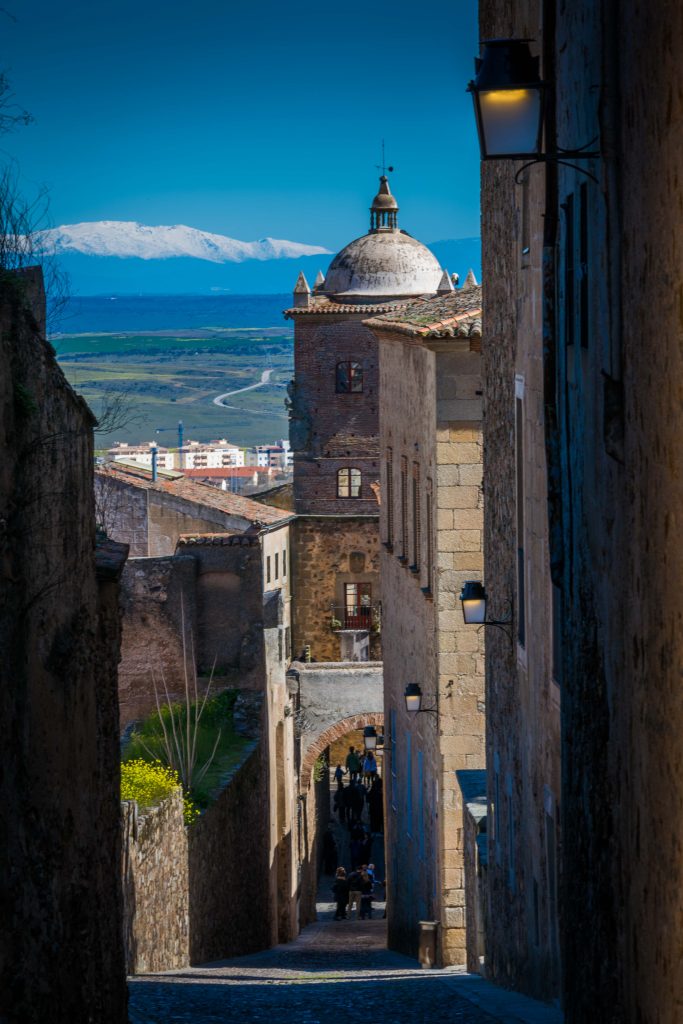 Cáceres old town with snow capped mountains in the distance

Driving north on the A66 from Merida brought us to this magnificent example of Medieval history. The A66 is known as the Ruta de la Plata or Silver Route and it was the Romans that first built a road along this route from Seville to the north of Spain. Nowadays, the A66 is a motorway that runs for several hundred kilometres in the west of Spain.

Our motorhome stop at Cáceres

We rarely book our next motorhome stop, preferring to decide a few days before where we might stay and then we turn up to see if pitches are available for our motorhome. This system hasn’t failed us so far and today was no exception as we arrived at Camping Cáceres and were told there were pitches available. We were given pitch 115 but when we drove up to the pitch we couldn’t fit our motorhome on due to trees so we asked if we could have pitch 117 which reception said was no problem.

Camping Cáceres  turned out to be a good choice because every pitch has its own shower and toilet facilities. I have never seen this before on a campsite. It was like having our own en suite bathroom, and high quality too!

Buses run every half an hour to the historic centre of Cáceres  and the fare is 1.10 Euro per person.

What to see in Cáceres

Cáceres was founded by the Romans and its old town is a UNESCO World Heritage site. You will find a mixture of Roman, Islamic, Gothic and Renaissance styles. There are more than 30 towers from the Islamic period. Torre del Bujaco is the most famous. 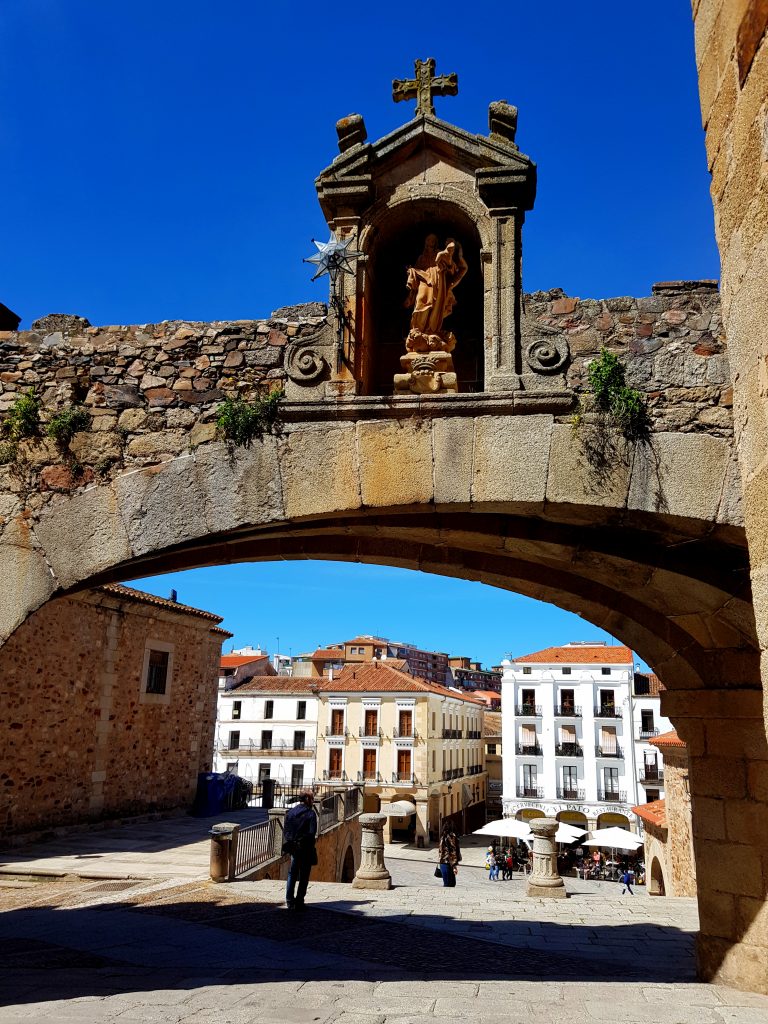 Looking through an arch into Plaza Mayor from Caceres old town

We headed for Plaza Mayor, a large sloping square with several restaurants and cafes as well as the entrance to the old walled town. We didn’t have a plan, so we just wondered through  the narrow cobbled streets admiring the several churches, huge palaces and towers. I can imagine that walking through these streets at night with no people would make you feel like you really were in Medieval times.

What to eat in Cáceres

I had done my homework about  Cáceres  and read that a dish called Migas was the traditional food of the area as well as Iberican Pork and Torta del Casar (local cheese) so I was determined to find a restaurant that served Migas and Pork so that I could try it. I didn’t really know what Migas was but I had read that it was spicy breadcrumbs with ham. It sounded good to me! Luckily the first restaurant we found in Plaza Mayor had Migas on the menu and there were tables available, in the sun too. 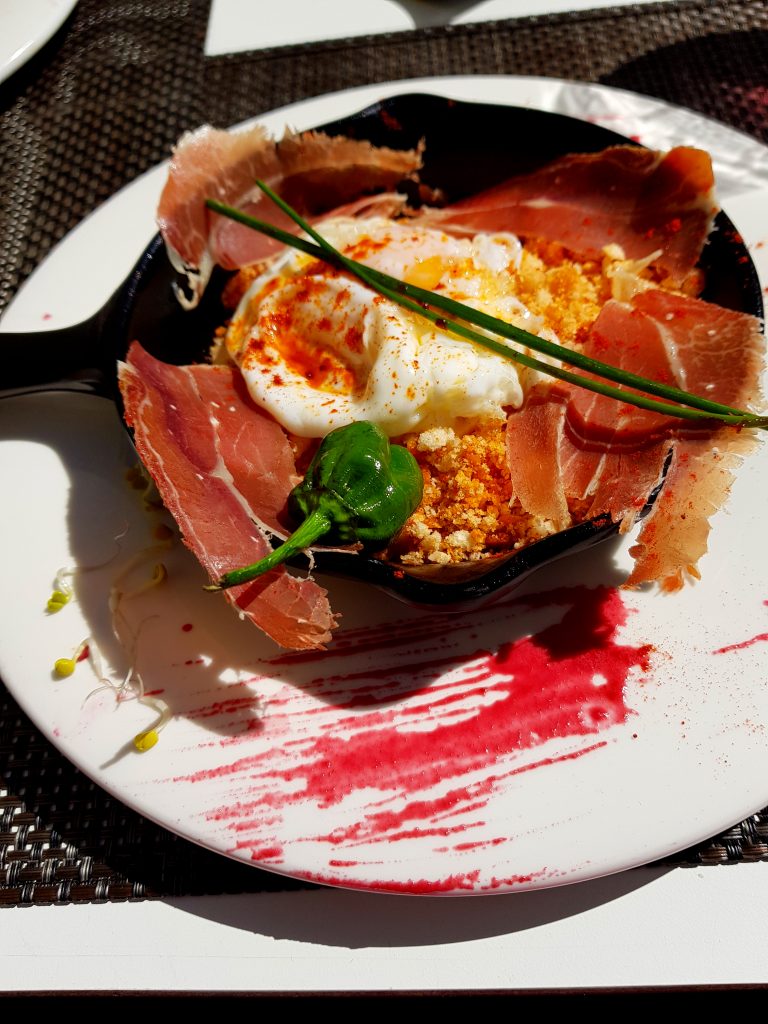 Whilst in Spain, we have had a few so called ‘Menu del Dia’ but the one we were about to have, for only 12 Euros per person, turned out to be the best so far on our motorhome journey. The quality and presentation of the food was of a very high standard. Menu del Dia is always excellent value we have found. For 12 Euros we had a Migas starter, followed by Iberican Pork and a dessert. A large glass of wine with a free tapas was also included.

Cáceres makes an excellent nights stop. Every country has its highlights but Spain is turning out to have far more than I ever realised!

Here are more photos I took in Cáceres 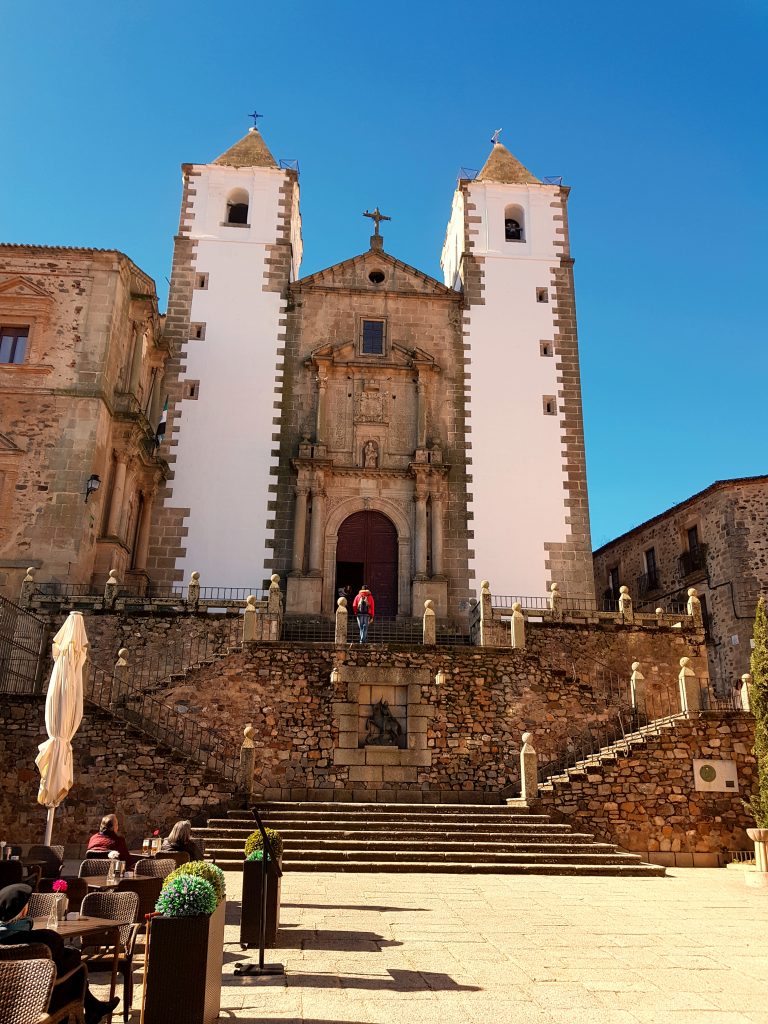 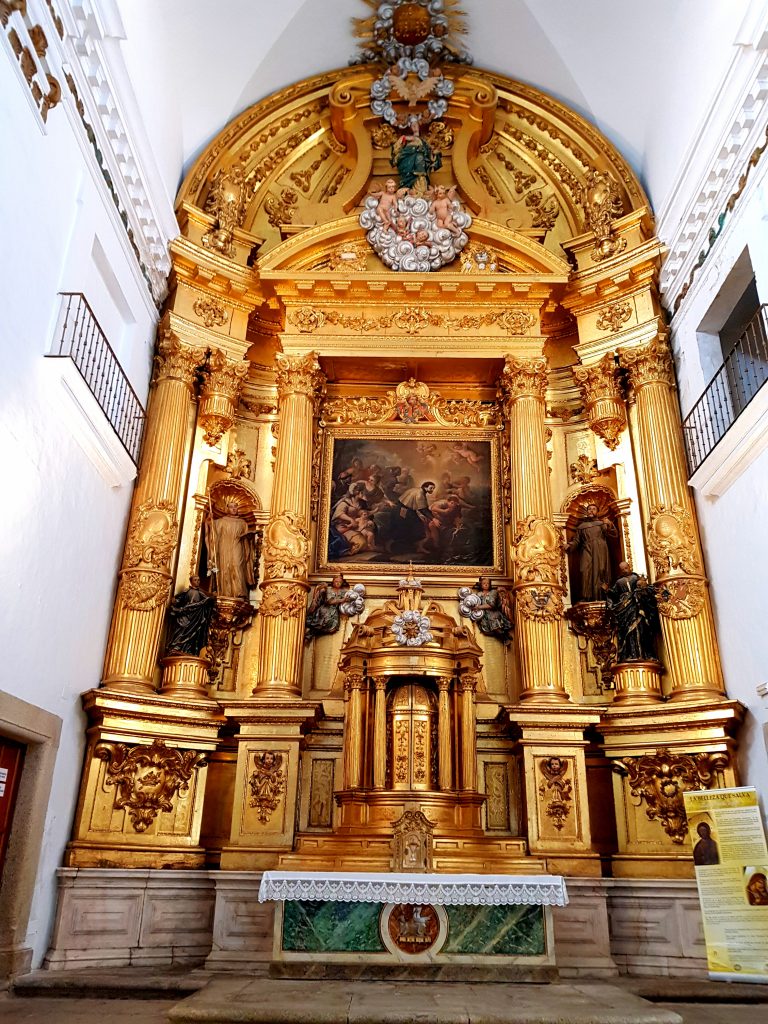 Inside the church of Ouesta de la Compania, Cáceres 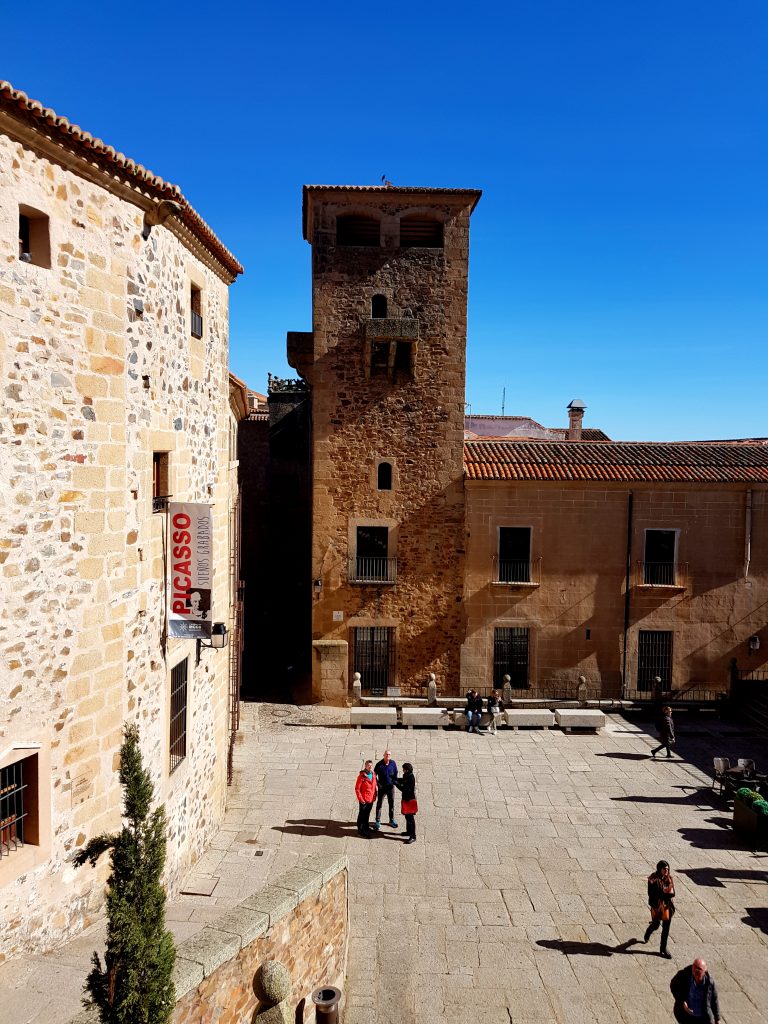 One of the many towers in Cáceres 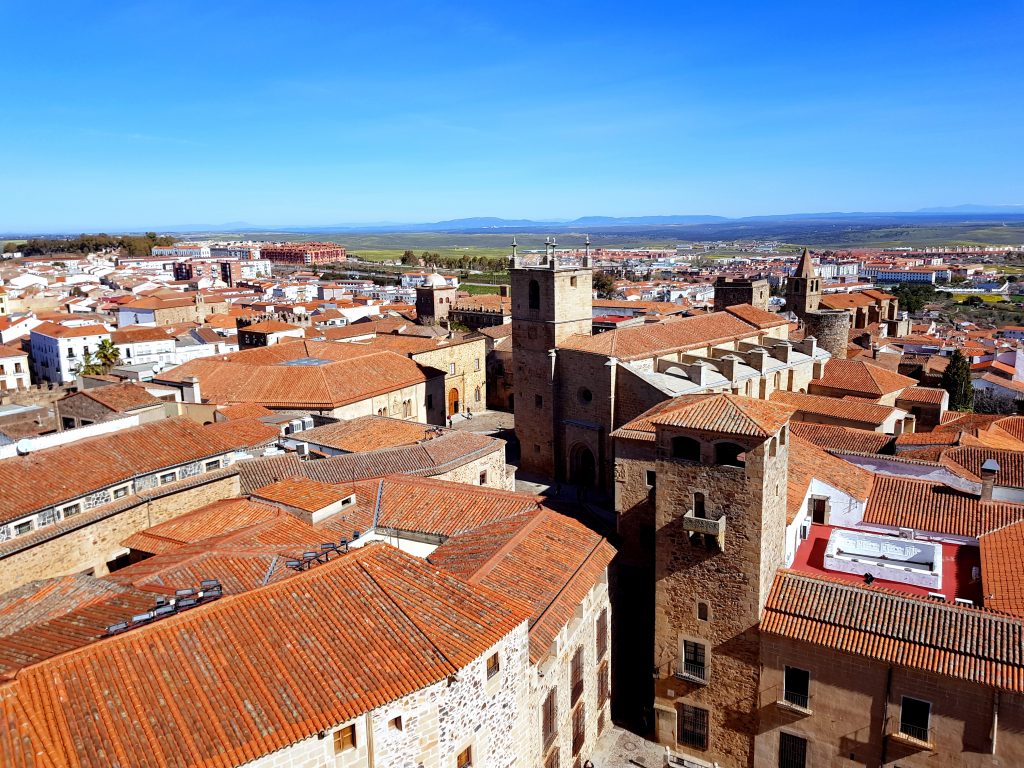 View over the roof tops of Cáceres 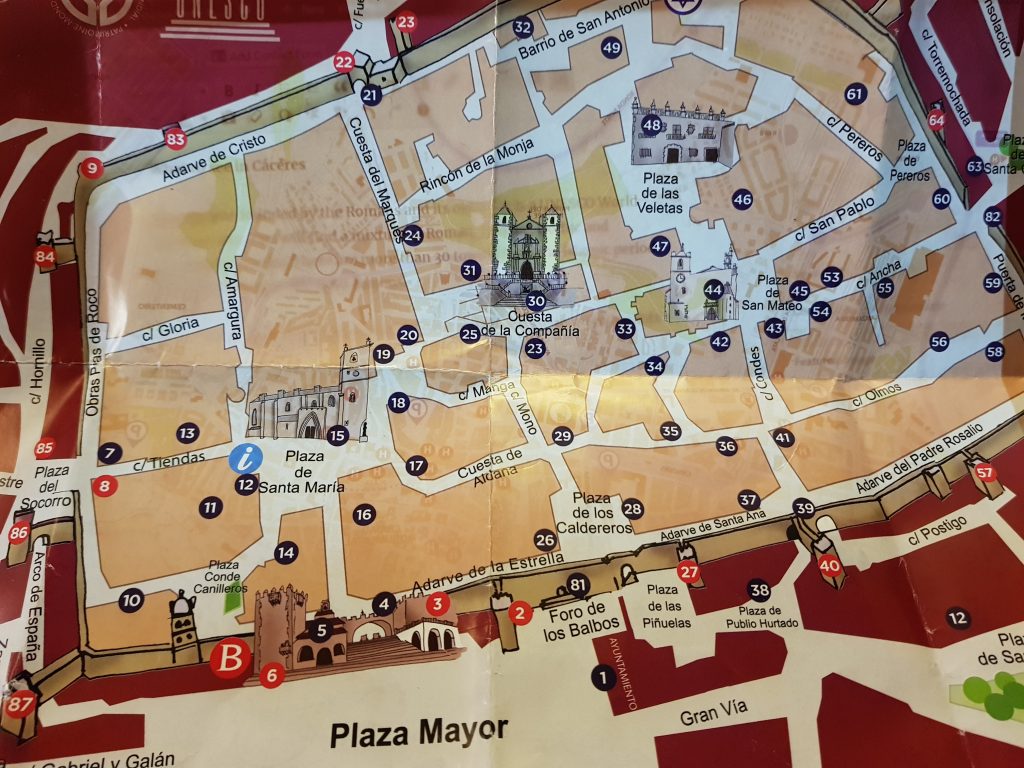 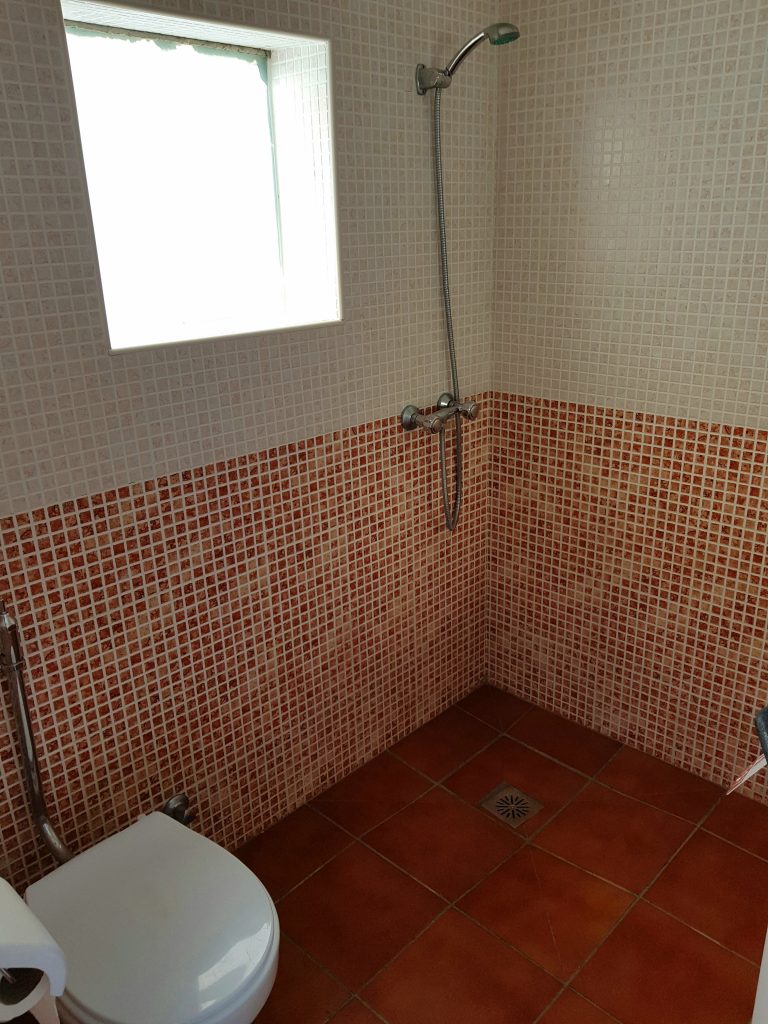 The shower room at Camping Caceres 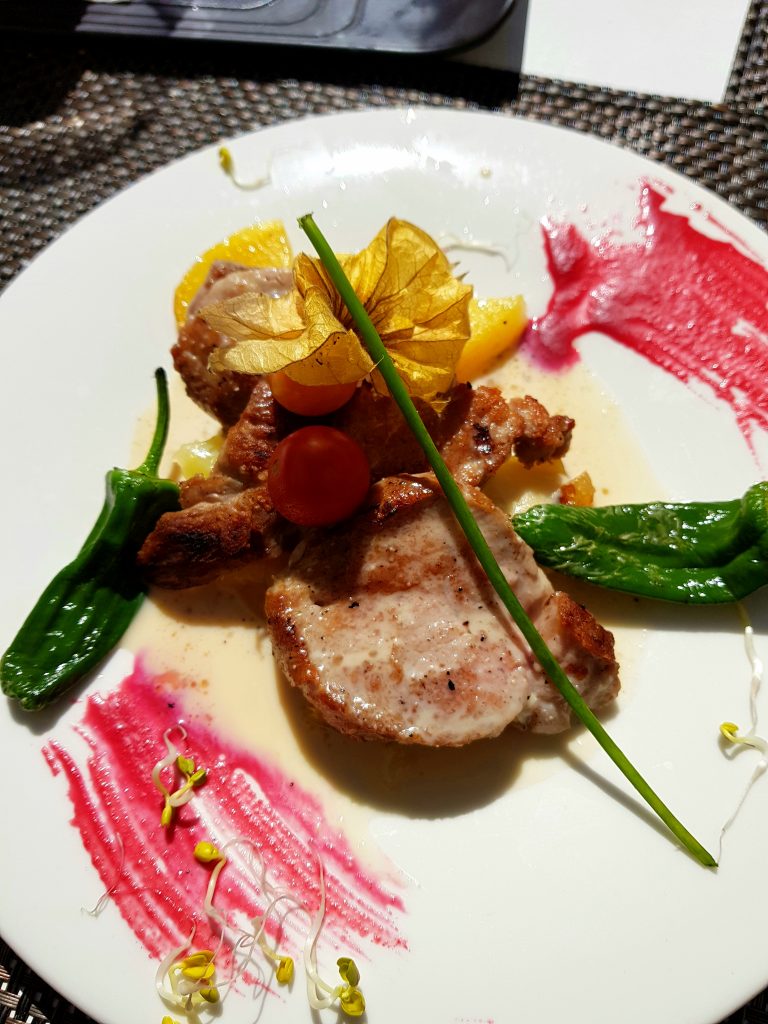 Traditional Iberican pork dish that we had for lunch in Caceres, Spain